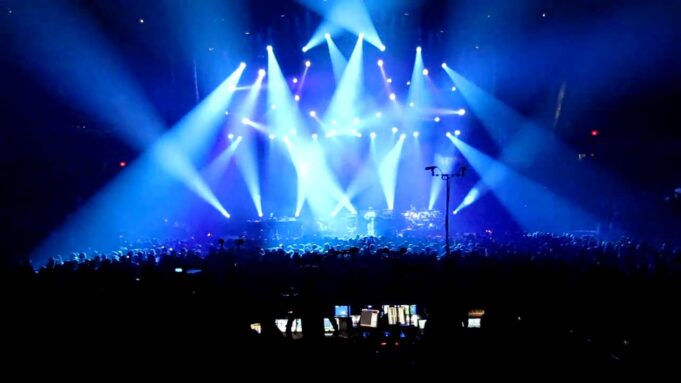 If you are interested in submitting reviews, news, or articles, please send us an email to [email protected]   We love reader submissions!

I’m a strong believer in the overwhelming power of coincidence.  So when the CD player stumbled upon Frank Zappa’s Peaches En Reglaia this afternoon, I was able to take it as a good omen.  That song, which was a centerpiece of the Phish New Year’s Eve show in 1993 in Worcester MA at the venue that was then called the Worcester Centrum, helped to set the good mood that carried me to show time.  Since I had not been back to the building really since that show, and had only been seeing Phish a few times this year after not having seen them for more than a decade, I was more than open to the idea of a good omen.

I zipped into downtown Worcester through the remnants of the blizzard that hit the Northeast.  The conditions slowed me some, but I pulled into the lot and my buddy Matt had saved me a primo parking space.  (Check out his band.)  I met up with my buddy Rick, who came to the East to do the whole 5 night Phish run, and his tour mate Corrine, and we went inside.  The two of them had dressed for the occasion, and they were looking stylie!    We made the climb up to the coveted 300 section and went to our seats, the penultimate row in the whole house.  I was not discouraged, as the view was actually pretty good.  The band fired up probably around 8:15PM, giving fans time to deal with the weather and traffic delays before starting the show.

The band popped the tour open with a great Sample in a Jar.  Solid start there.  I got comfortable with my surroundings and scooted down about 8 rows to the very front of the third tier- in direct ear shot from the speaker stacks- getting a full and beautiful blast of sound exactly as the band intended me to hear it.  Awesome – time to settle in and Mike rips off a great Funky Bitch.  I started to feel like things were going to be special on this run.  Gordon’s vocals were super playful in the later verses, and away we went.

Next up was a tune that I didn’t know, called Cool It Down, which became quite upbeat by the end.   Next up, Roggae and the band was harmonizing and gelling.  Heavy Things brought the energy back up and had an extended solo.  Mike continued the energy crescendo with What Things Seem followed by Roses are Free segued into It’s Ice in all its dark glory.  A somewhat somber Mountains in the Mist  gave way to the set closer Julian.  The band’s energy level seemed to wane a bit occasionally during the set, but that usually didn’t last long and frequently gave way to a new burst of energy.  The set’s close included the raucous jam and vocal flourishes in the chorus, and a good mood escorted us into set break.

We wandered out onto the concourse of the third tier there, and it was practically empty with a semi-private beer and food vending situation.  We chilled in the hallway during set break, for no good reason really, other than it wasn’t crowded.  I wandered down toward the second tier’s concourse, spotted the length of the rest room line, and decided I could be patient and went back in for set two.

I rapped briefly with a cat named Tim who was standing next to me, vibing off the first set.  We fell into the casual “what’s opening” conversation, which I love.  I called Runaway Jim,  my stock answer, and he called Seven Below.   No sooner had the predictions been made when Mike’s Song emerged as the opener.  Gordon’s energy level was super up in the first set, and he immediately let loose with some energy as the second set commenced.  Tim and I shared a “Well that’s a good choice” look..  I said to him,  “Now we know how the rest of our set is going to feel…”  Mike’s Song is just one of those set cornerstones that really effects the way you hear the songs that surround it- in the same way that the orchestra movement will set the tone for a whole symphonic piece.

During this version, Fishman was doing some great jazz fills on the kit, laying back and really stretching in a way that I am not used to seeing him do with Phish- he had his hands in the jazz position more with the sticks, and just in general seemed to be going for some new grooves and sounds within the jam.  The segue moved right into Mound which I hadn’t seen in the couple of other shows that I attended this year with the Burlington Boys, and it was a galloping version.  The band hopped back into Weekapaug Groove and the movement was completed.

Trey brought us gently down into a sentimental version of Farmhouse which was solid but not overwhelming after the strong openers.  Seven Below did come out, fulfilling Tim’s prophecy, and was my first version.  The lyrical allusions to wintery imagery was fitting in this night that really seemed to follow the official start of New England winter.  New material for me continued with a segue into What’s the Use? which really arrived with a rhythmic and tonal bomb that the band dropped on the audience.   Like chameleons, the band morphed into Twenty Years Later to close that movement.   The energy wavered for a bit with Wading in the Velvet Sea but quickly re-ascended with a finale movement running from Possum into Cavern into David Bowie  for the nice old school triple shot to close the set.

The band took their time coming back for the encore, but rewarded the crowd with the Stones Lovin’ Cup to which the band always does justice.  The first show of the holiday run 2010 was in the books.  Overall, it felt like a really solid foundation to begin the tour- but like a champion sports team, Phish was just stretching and warming up to their overall goals.  I was not blown away by this show, but really enjoyed it, and am ready for tomorrow night to be just as good.

SET 1: Sample in a Jar, Funky Bitch, Cool It Down, Roggae, Heavy Things, What Things Seem, Roses Are Free > It’s Ice, Mountains in the Mist, Julius