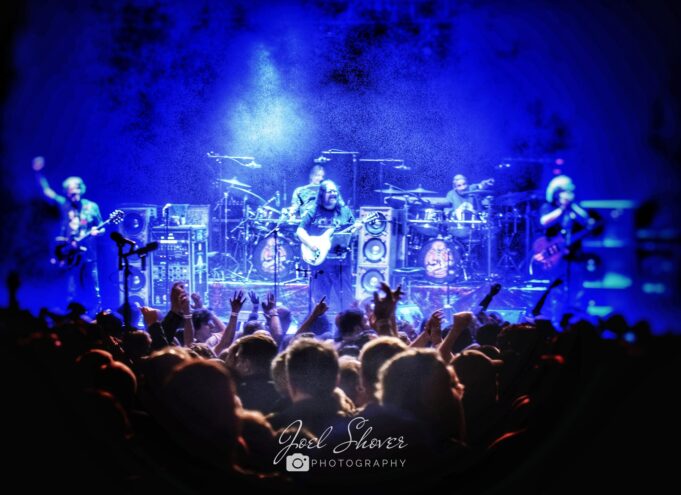 Just like a fine wine that has aged so well, the same can be said about the famous Capitol Theatre in Port Chester, New York.  The Cap, as it’s called, first opened in 1926 and has hosted a variety of entertainment over the many years before earning its name on the National Register of Historic Places in 1984. It was 1990 that I remember the Cap for the historic Max Creek shows in March and April and then the famous PHISH and Blues Traveler show in Oct of 1990. Tonight, would be my first time back and it is a lot nicer than I remember. Peter Shapiro’s team have made some great improvements and adding Garcia’s, a 200 capacity venue and restaurant, in the front was a genius idea!

The nostalgia in this venue is so crazy you can feel it- the Cap is both beautiful and haunting. As I entered the venue I was greeted by the friendly staff and proceeded to the front. This place was packed and the space was only getting hotter as Dark Star Orchestra kicked off their two-night run in this special venue! Thankfully the Port Chester Fire Department are obvious fans and right next door so the band was definitely ready to burn the roof off!

Dark Star Orchestra on their 25th Anniversary Fall Tour are: Rob Eaton, guitar and vocals; Rob Barraco, keyboards and vocals; Rob Koritz, percussion and drums; Dino English, drums; Lisa Mackey, vocals; Jeff Mattson, lead guitar and vocals; Skip Vangelas, bass and vocals. The huge fan base they have has been following the band for over 3000 shows world-wide, spanning twenty-five years strong, providing the ultimate Grateful Dead experience. DSO’s ever growing family grasps for that sense of familiarity that the band delivers every time, 110%.

Check out Joel’s incredible gallery of photos from this night here.

Tonight, would be no different as they took the stage and went right into a smoking “Promised Land” that had the orange dancing bear spinning with the rest of us. The set list chosen by the band was December 27th 1978, from Golden Hall, San Diego, CA and featured” Friend of the Devil” followed by “Cassidy” which featured the vocals of Rob Eaton, who would rival a young Bob Weir on a great night!

It didn’t stop there as they kept the crowd dancing with crowd favorites like “Mississippi Half-Step Uptown Toodeloo” that showcased the amazing eclectic guitar style of Jeff Mattson. If you are having any kind of Grateful Dead withdrawl whatsoever go see Dark Star Orchestra the first chance you get, it will spin you back in the right direction for sure.

The band finished out the smoking first set with “Franklins Tower” and an upbeat “ The Music Never Stopped”.

Set-break at the Capitol Theatre was a great chance to see some old friends and make some new ones, too. I made my way into Garcia’s to see Jerry Garcia’s “Tiger” guitar that is on display only to be even more amazed with how beautiful this theatre really is! You need to see a show here if you never have, it is truly a bucket list experience.

Second set continued above the energy of the first set with a ripping rendition of “Bertha” into a full house dance party of “Good Lovin’”, cause you got to have lovin’! Things must have gotten too hot, as the band slowed it down for the classic “Ship of Fools”. From the first strike of the drum notes I had to check my phone to make sure it wasn’t Sunday as they busted into “Sampson and Delilah”.

Now for all those passengers that took that bus, the turtle train was here and it was time to board and make our way to “Terrapin Station” as Rob Eaton showed off more of his phenomenal Weir-ish vocals and style with a firestorm of a “Playing in the Band” that mesmerized even the oldest of deadheads in the crowd and at home watching on Relix.

The walls of the Capitol Theatre were about to be tested with the ferociousness and finesse of ”Drums > Space” masterfully led by Rob Koritz and Dino English. The walls were plastered with many exiting visuals to enhance this incredible jam as it took us right into “Not Fade Away” as every fan was singing and clapping along. The love alone was enough to keep this fire going even as the band slowed it down once again for the haunting ballad of “Black Peter”.

The joint was still jumping as we went “Around and Around” into, “U.S. Blues” for the Encore.

As that wasn’t a cupcake of a show enough the band had other plans as they decided to throw a special cherry on top with a cover from The Band, “The Shape I’m In”.

Go See Live Music…. Till The Next Show……. Joel One Show at A Time 😊

Set 2:
Bertha
Good Lovin’ (The Young Rascals cover)
Ship of Fools
Samson and Delilah
Terrapin Station
Playing in the Band
Drums
Not Fade Away (The Crickets cover)
Black Peter
Around and Around (Chuck Berry cover)

Encore:
U.S. Blues
The Shape I’m In (The Band cover)

Check out Joel’s incredible gallery of photos from this night here.