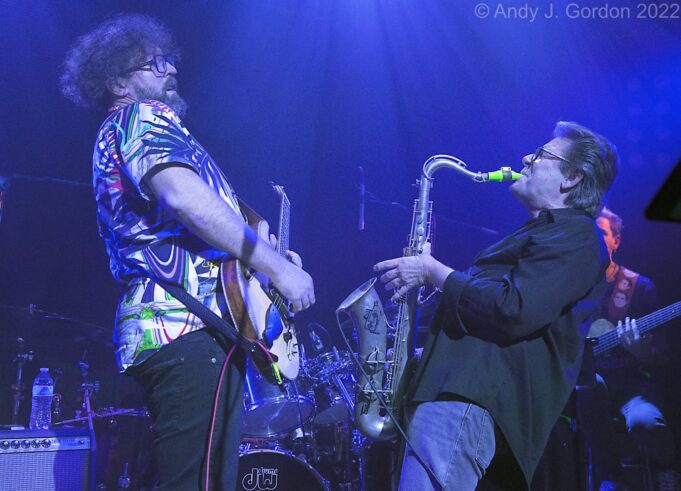 Marcus Rezak is an innovative guitarist who has made his mark in the progressive rock, modern jazz and jamband scenes. When he announced that he was putting together an all-star Friendsgiving jam at the legendary Troubadour in West Hollywood on the night after Thanksgiving, there was great anticipation for an epic show. The performance on November 25, 2022 lived up to the billing as Rezak led a powerful lineup of contemporary musicians and a few legends through three sets of creative music.

Rezak built his reputation in Chicago with Digital Tape Machine, a prog-rock project with Kris Myers and Joel Cummins from Umphrey’s McGee. He has also collaborated and done session work with Ratdog, The Disco Biscuits, String Cheese Incident, The Motet, Dopapod, RAQ, Primus and Circles Around The Sun, among others. Most recently, Rezak is probably best known for his “Shred is Dead” project which enlists a variety of musicians that take the music of the Grateful Dead and reinterpret it with a progressive rock perspective.

The Troubadour show opened with a Shred is Dead set that featured The Yellowjackets’ Felix Pastorius on bass, The Motet’s Dave Watts on drums, Bob Weir/Phil Lesh’s Wally Ingram on percussion, Circles Around The Sun’s Adam MacDougall on keys and Shania Twain’s Andrea Whitt on vocals. The set included imaginative versions of “West LA Fadeaway,” “Althea,” “Bertha” and “Terrapin Station.” Watts and Ingram traded places on the drum and percussion kits during the set. They continued to do that all night.

The second set featured Rezak, Pastorius, Watts, Ingram and MacDougall as well as additional guests Arthur Barrow on bass and Ike Willis on guitar from Frank Zappa’s band. Ben “Smiley” Silverstein from The Main Squeeze joined in on keyboards. They opened with a few Frank Zappa tunes including “Pygmy,” “Chungas Revenge” and “Cosmic Debris.” Rezak then introduced Robby Krieger, the legendary guitarist from The Doors.

Check out the full gallery of photos located here.

Krieger came out to thunderous applause and led the band through a few classics. He got additional support from Jon Cole who sat in on vocals. They played “Backdoor Man,” “Roadhouse Blues,” “People Are Strange” and “Love Me Two Times.” Krieger and Rezak traded amazing solos while MacDougall and Silverstein did the same. Krieger told the crowd that he wrote The Doors first hit song and would like to play it. He launched into the iconic guitar riff for “Light My Fire” and the band joined in to tear it up. Krieger segued into Rodgers and Hammerstein’s “My Favorite Things” before bringing it back to the classic rocker. After the song ended, Krieger hugged everyone and departed from the stage.

The final set of the night started with some instrumental jazz fusion. Rezak, Watts, Ingram, Pastorius, MacDougall and Silverstein were joined by saxophonists Scott Page from Pink Floyd and Ian Roller from GenR8R. The new guests blew intricate solos on The Weather Report’s “River People” and Jaco Pastorius’ “The Chicken.” Felix Pastorius performed an elaborate bass solo on his Father’s tune.

Rezak introduced Shira Elias who came out from the wings. Rezak and Page led off with the opening section of Pink Floyd’s “Breathe” before the former singer from Turkuaz took over on vocals. Her powerful and sultry voice complemented the band’s brilliant version of the song. The band segued into “Great Gig In The Sky” as Elias showed off her pipes with impressive, improvisational, non-lexical singing. MacDougall played the haunting keyboard lines for an amazing and poignant performance by the entire band. Rezak thanked everyone for coming and rather than clear the stage, all of the band members stayed and played the encore, Prince’s “Purple Rain.” Elias handled vocals and led many in the crowd who joined in for the chorus to end the long, amazing show.

Marcus Rezak is an innovative and talented guitarist who undoubtedly gets great pleasure from performing with a wide array of musicians. The Troubadour show allowed him to jam with many of his friends on a variety of songs covering multiple genres of music. His ability to alter his style, play brilliantly and share the accolades with the other artists made it a memorable night of excellent music.

Rezak has a full run of dates featuring shows with original music, Shred is Dead, Zappa Experience w/Ike Willis, and the launch of Gumbo, which will be re-creating Phish shows from the 90s in their entirety with Rezak using an authentic 90s rig.

Go to www.marcusrezak.com for his upcoming tour information.

Check out the full gallery of photos located here.