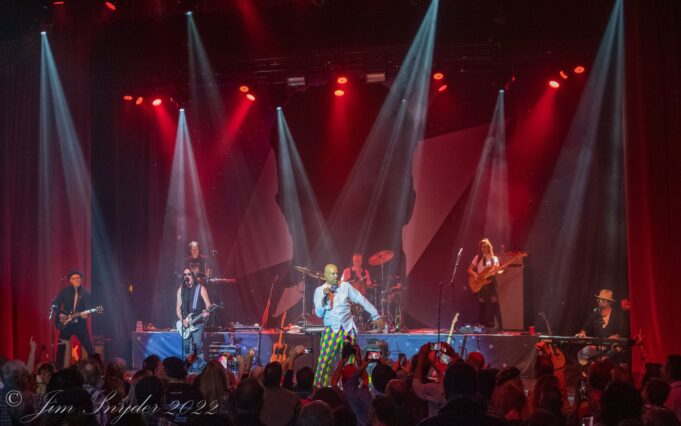 What a show I saw Friday night Celebrating David Bowie @ The Copernicus Center Chicago Oct 14th 2022 . I had been waiting patiently since it was announced , and I am a huge Bowie fan . I was fortunate to have seen David Bowie three different times including the tours for Scary Monsters , Serious Moonlight & Glass Spiders tour .

This was a Celebration of David’s Music, and the musical director was Angelo Scrote Buntini and a cast of stars which included Todd Rundgren, Adrian Belew, plus Royston Langdon and Angelo Moore who fronted the band. The rest of the supporting cast included Ron Dziula on saxphone and keyboards, Angeline Saris on sonic bass plus Travis McNabb on drums keeping everything together, Chicago’s own Ava Cherry appeared also as special guest. The set list covered about thirty songs from throughout David’s long musical journey.

The show opened with “Sounds & Vision,” a song Adrian performed live with David in 1990 . Next up was “Young Americans” fronted by Todd Rundgren who added his Philly soul feel to the lyrics. The buzz in the crowd was electric as most everyone was singing along. If you have never seen Angelo Moore from Fishbone you must see him sometime, as his stage presence and theatrics is off the charts, He draws in your attention, as your eyes are glued to him. His painted faces clown costumes were amazing.   Unexpectedly, Moore played the Theremin on stage to capture all the amazing weird space age sounds David used on his early works .

Next up front was Royston Langdon of the 90s band Spacehog. I was not too familiar with him before this night and now I know I need to check out his catalog. He opened with the song “Moonage Daydream” from Ziggy Stardust now everyone in the audience was ready dance and sing.

Some of the songs in set list that really moved me were “Life on Mars” as sung by Todd Rundgren, the 1979 cut “Boys Keep Swinging” as fronted by Adrian and Scrote “Ziggy Stardust” sang by Royston , and about anything Angelo Moore was on stage performing. In Chicago we had a very special treat Ava Cherry singing “Win” and “Rebel Rebel” alongside Angelo Moore .

As you can tell by my writing, I am not a writer but this show was so emotional for me as a fan of David Bowie and a good chunk of the cast. I had to pinch myself a number times. Is this really happening? The drive home had all of these amazing songs of David Bowie flowing through my head.

The Man Who Sold the World

The Stars (Are Out Tonight)

All the Young Dudes (with Ava Cherry)