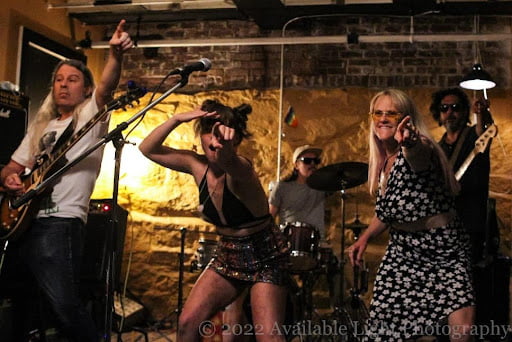 Featuring Liz Bills and The Change, This Bliss and Mosaic Mirrors on June 10, 2022 – by Kathy Hicks

Situated within the labyrinthine walls of New Alliance Audio in Union Square is a new Art Gallery, and this past Friday I attended the Grand Opening. It featured the creative talents of Ivonne Blanco, Michael Crockett, Alvan Long, William Frese, Duncan Wilder Johnson, Barbara Jo, Charlie Warren, Trevor Toscano, and Bob Shane. New Alliance Gallery is a ‘community of visual artists, fabricators and musicians with ‘a space to give art a place to practice’. Sounds pretty amazing, right?

Also residents of New Alliance are the band, This Bliss, who performed for a live audience for the first time since the pandemic, that night.  It was a particularly special show for members Jess Baggia, Nick Zampiello, Alvan Long and Tom Maroon as well, because it was also the live debut of their most recent album, ‘Retroshade’, recorded during the heart of the pandemic, in March of 2021.  This Bliss opened up the night, Jess’s brilliant vocals flowing through layers of heavy synthesized beats, polished guitar riffs and solid bass lines.  Very trippy and soulful.

I was drawn to the gallery opening by the sirens call of one of my kindred spirits; Liz Bills.  She and her band, Liz Bills and The Change, would be performing at the opening along with two other bands, This Bliss and Mosaic Mirrors.  A whole pandemic had occurred since the last time I saw her perform, so Liz and I agreed to sit down for a casual interview before the show.

LMNR: So, this is a totally casual interview.  Let’s just chat about what you’ve been up to, and what you have coming up.  You sent me your set list, I saw that you’re performing mostly new music tonight.  When will some of it be hitting streaming channels?

Liz: We have a new song coming out on July 29th, ‘Real Love’.  The new material is different from the last album.  The last album had more of a folk/americana feel and I did most of the writing.  This time the writing, it has more of a rock, funk, soul feel because I’ve been writing with my guitarist, Ben, and he was really influenced by rock and Stevie Wonder, funk and soul.  And he can write all those cool riffs that I don’t write. And I missed jumping around and dancing.  I could do it with the acoustic, but it didn’t have the same feeling.

I think our goal as a band this year is to write festival dance songs.  And my goal as an artist is to just feel happy and to write music for myself.  A band is like a marriage, and it feels so wonderful and full of love right now, to be doing it for that goal.  Instead of the old one which was to chase fame, success, and validation.  I feel like even if you do get famous, it’s just an empty way to live your life, if that’s the foundation.  It’s like “I just want to be popular” or “I just want to be liked”, you know?  It took a long time to, well, I’m in that transition now, of letting that go.  And then if I get famous, heh, that’d be great <laughs>.  It doesn’t matter.  Why do we sing, except to communicate and connect.  It’s funny, my lead guitarist in Analog Heart was always saying, “I just want to do music because I love it,” and I was like, “Well I don’t want that, I want to be famous!”  That was one of the reasons that our ten plus year band relationship broke up.  Looking at it now, it’s nice to be able to let go of that suffocating way of living my life and operating.

LMNR: It’s a way to spiritually, for yourself, live your life.

Liz: That’s a good word, yes.  I’ve become very spiritual.  When I ask myself, “What’s happiness, what’s freedom?” Those are the answers.  To open my eyes, and to see that I have so much.  I have everything I could ever want, and maybe that’s alright.

Liz: Yeah, because the other way is that lens of blackness, and desperation.  And then you realize that oh, I can actually just decide to look at it a different way.  It’s pretty cool.

LMNR:  That is pretty amazing, and something to definitely aspire to as an artist of any medium.  It sounds like you’ll be pretty busy this summer, now that you’re kicking off live shows again with this one tonight, any tour plans?

Liz: I have seventeen shows booked this summer, with the band and solo. I’m having fun, and I may plan a solo tour for the fall, maybe with So Far Sounds.  Have you heard of them?  It’s really awesome.  It’s secret shows around the world.  You can book a whole tour through them.  Say you bought a $20 ticket, they’ll tell you the show will be in Boston, but they won’t tell you where until two nights before the event.  Then they’ll reveal the location to be a bicycle shop, or some obscure place like that.  You’ll have three artists, and you won’t know who you’re going to see.  You can bring alcohol and snacks, and the rule is you have to be quiet, which I love.  So it’s always really fun and exciting.  So I’ve been doing those.  I think another thing is, I like touring, but I’ve never done a ton of it.  And think I’ve always felt a bunch of shame and guilt over that.  Like, I should be on the road, for a few months out of the year, like six months or something.  Now, I just love my life and how it’s set up.  But, I love to travel, so maybe it will change.  I think maybe this year might change that.

LMNR: What other things have you been focusing on?

Liz: I’m a vocal teacher, and I’m stepping into my next phase which is helping people who have chronic pain with their voice.  I went through it myself, with Muscle Tension Dysphonia.  I put my success story out on YouTube and I was surprised that it went viral.  All these people were emailing me and asking me for help.  I felt spiritually like God was saying, “Yes, you’re a performer, but in a sense you’re actually a healer and teaching is your calling. You are going to help people.”  It’s not something I chose for myself, which I also love, it was just fate.  I’m really diving into that this year, starting a program and a YouTube channel.  I’m working with Taraleigh Weathers, ‘Rocking Life’, it’s called.  Her business is to help entrepreneurs start their businesses.  I’m in a group where we meet twice a week, we hold each other accountable and she helps me build my plan.  It’s been scary because I’ve always put my performance first.  And it is still first in many ways, but this is going to be my baby now.  It’s weird, and cool, having that change happen because I’m thirty-six now.  An adult, motherly woman now instead of a bratty kid.  It’s nice to be here.

This is just a year for a lot of change for me, no pun intended.  Quitting drinking after twenty years, it’s very interesting and surprisingly good, you know.  To go to all my shows, and not drink.  It feels so good in my body.  I also quit smoking cigarettes.  I’m ‘California Sober’.  Still do LSD and mushrooms, and I swear by it as medicine.  I will use it for spirituality and to talk to God, to clear out my mind and to get in touch with my deeper self.  It’s been blowing my mind, because I didn’t think as a thirty-six year old, I’d be doing psychedelics.  I thought that was over <laughs>.  I recommend going somewhere in nature, where you feel like no one is going to come around, and you feel safe, bring all your snacks and drinks with you, and then take it.  I’ve been taking it at my cabin in the woods with my boyfriend in the sun, with the rushing brook and the cows.  And I have ego death and incredibly healing spiritual experiences.  I was really shocked.  My ego was diminishing, or I could see it more and understand it better. It’s just been mind-blowing for me.  I highly recommend it, in a non-party scene.  As I get older, I guess I just care less.  I just never want to let go of that child like sense of wonder.  I love to wear fun clothes, have bubble guns blowing on stage, and just playing like kids.  I feel like I’m the happiest when I’m that way.

LMNR: I’ve mentioned this to many musicians; I think music keeps us young at heart.

Liz: Oh yeah, definitely.  Any of the arts.  It keeps that learner’s brain alive.  And they say the people who live the longest are in community.  In music we have community.  My whole band.  I don’t know.  It would be hard for me to have friends without the music.  Music has saved my life, and it’s keeping me, someone who is very shy, connected.

Seeing her on stage, you would never believe her to be as shy as she lets on.  She connects with her audience in a way that transcends mere conversation and makes you feel like you’ve been part of her circle your whole life.

They played a high energy set and we were all dancing and singing along.  One of their new songs was written for Stevie D, who travels from show to show, dancing and blowing bubbles while they play.  It was aptly named, Bubble Man.  What a joyful community.  Liz and Jess also did an acoustic cover of the Lucious song, Mother, that blew us all away.

I would be remiss if I didn’t introduce the rest of the amazing band, starting with her incredibly in sync back up vocalist, Jess Olson.  On lead guitar is Ben Goldbaum, on bass is Santiago Saenz and on drums is Joey Hartigan.  These fine folks make up Liz Bills and The Change.

Liz will be out playing this summer all around New England, either solo or with The Change.  Check out the dates below or go to Lizbills.com for tickets.

** Kathy Hicks of LMNR will be on Harry’s Hill!

The final band, Mosaic Mirrors, I got to hang out with that evening, but I sadly did not get to see perform because of time constraints.  Their music however, is so fun and fantastic and I plan on checking out a live show soon!  Check out this clip of their show from the opening.

I had a great night and met so many wonderful new creative friends.  I definitely recommend checking out the Gallery and all of these artists!  Great to be back in the game, my friends!  Chat again soon!