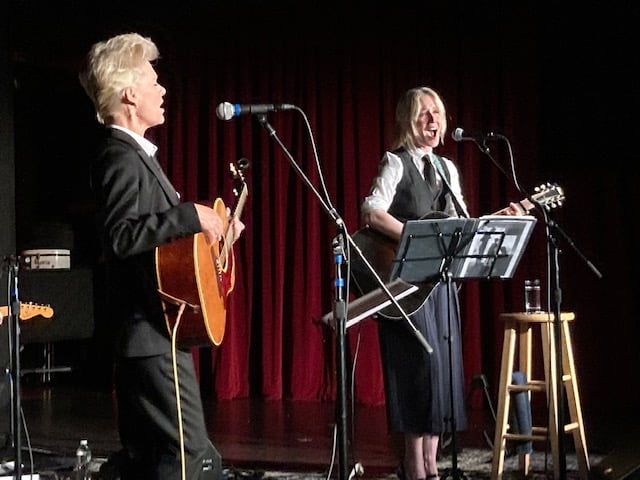 At City Winery Boston May 2, 2022 By Michael Lasalandra

Sisters Shelby Lynne and Allison Moorer brought their exquisite sibling harmonies to the City Winery Boston May 2, wowing a sold-out crowd with a tour de force performance of songs that plumbed the depths of their souls, celebrated the joy of resilience and displayed the unconditional love between sisters who endured and came through a family tragedy that might  destroy most children.

Their world was shaken to the core when their alcoholic, abusive father shot and killed their mother and then turned the gun on himself when they were just teenagers. They turned to each other for support and have spent the last 36 years processing the event, while maintaining separate solo careers that have garnered numerous awards, including a Grammy for Lynne and a Grammy nomination for Moorer.

The duo has been singing together since they were young children. Their mother used to sing and their father played guitar. “We grew up listening. to mom and dad’s records, learning to sing harmony.” Lynne said.

The elder sister recalled how Moorer could sing perfect harmonies with her and their mother as early as the age of 3.

“There is nothing like having a baby sister to sing with you and she happens to be the best there is,” Lynne said. “And we’ve been singing together forever.”

Despite pursuing solo careers for decades, the duo had never recorded together or toured together until 2017. At that time, they played the Sinclair in Cambridge to support their first-ever album, Not Dark Yet, named after the Bob Dylan song that was one of many interesting covers on that album, including Nirvana’s Lithium, Nick Cave’s Into My Arms, and Merle Haggard’s Silver Wings.

This night they closed with the Dylan song about growing old. They also did Cave’s Gothic Into My Arms.

It is hard to pigeonhole their music. Lynne’s is a combination of country, soul and rock. Moorer is more closely associated with Americana. She is an ex-wife of singer-songwriter Steve Earle and is currently married to singer-songwriter Hayes Carll.

This show opened with Townes Van Zandt’s Lungs, then moved into The Rock and the Hill, a song off Moorer’s 2019 album, Blood, which dealt with the tragedy and the lifelong struggle to come to terms with it. She also wrote an acclaimed memoir of the same name. It was the first time either sister had addressed the tragedy in detail.

The duo then moved into a few songs that celebrate their Alabama roots, and then did some songs they used to sing as young children, Including the Everly Brothers’ All I Have to Do is Dream. They acknowledged their debt to the brothers, considered among the best harmony duos ever. All harmony duos owe them a debt. Just ask Paul McCartney or Simon and Garfunkle.

“Sissy has beens singing that song since she was 3 years old, said Lynne, who pretty much always refers to Moorer as “Sissy.” In fact, they dubbed this tour the “Sissy Tour.” The Boston show was the last one on the tour and, according to Lynne, the best. “It’s time to quit and we’re just getting good,” she said.

Despite what their father did, the sisters seem to have found a way to appreciate him for whatever good things he did in his life and the fact that he, as well as their mother, gave them an appreciation of music. At least that’s how I looked at it.

Lynne was playing her father’s guitar, a 1963 Gibson B-25. They also sang a song she wrote about him, Following You, and one that Moorer wrote, The Ties That Bind.

Before ending the show, they paid tribute to Naomi Judd of the mother-daughter duo The Judds, performing two of their songs. Judd committed suicide last week.

“We knew every Judds song,” Moorer said. “It was like losing mama again.”

There were tears welling up in her eyes as she talked about Judd, as there were many times during the show when they sang a song that seemed to be inspired by the tragedy. They did not specifically talk about the event, but several songs subtly referenced it.

Despite the sadness of some of the songs, the show was actually quite joyful. The sisters looked deeply into each other’s eyes as they executed their perfect harmonies, and smiled at each other constantly. I have ever seen such an expression of love among performers.

“Singing together is everything to us,” Lynne said. “All I want to do on my dying day is sing with you Sissy.”

As they finished their last song, the emotional Not Dark Yet, Lynne looked at Moorer and said: “I love you.”

The Rock and The Hill

Easy in the Summertime

All I Have to Do Is Dream

Michael Lasalandra is a music fan and an artist who paints portraits of musicians, among other. subjects. His work can be seen at mlasalandra.com.