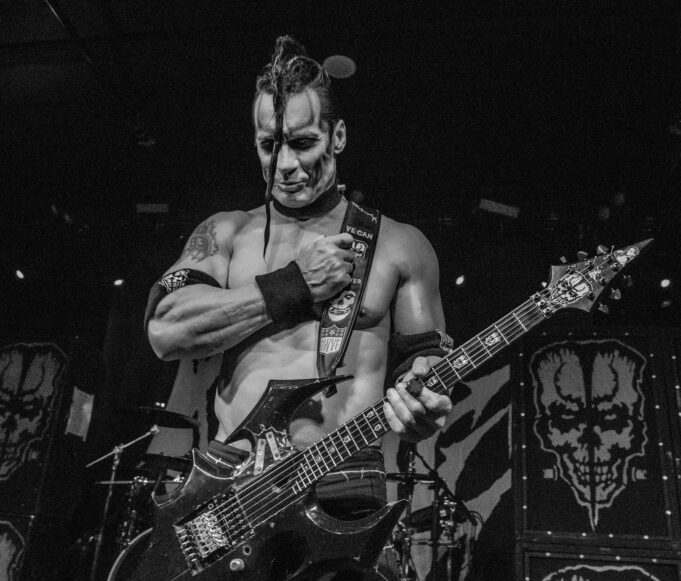 Doyle appeared at The Vault Music Hall & Pub in New Bedford, MA  on March 4, 2022 with Salem’s Childe, On Your Deathbed, and Murder Ride.

Doyle Van Frankenstein (Paul Doyle Caiafa), long time lead guitarist for the legendary punk rock band the Misfits brought his own band Doyle Friday night March 4th to the Vault in New Bedford. Friday’s show was the start of the bands 2022 Abominate the World Tour with shows throughout the US and Europe. After a two-year hiatus the short but hard-hitting set did not disappoint.

The band Doyle has been around since 2012 when it evolved from the ashes of Gorgeous Frankenstein (2007), Caiafa’s original solo project. After touring consistently since their inception it’s hard to understand why this band isn’t more popular and one of the biggest names in heavy and hard rock. Sitting nicely at the intersection of punk rock and heavy metal, Doyle often brings infectious grooves and catchy songs to their pummeling musical assault. “CemeterySexxx”, one of the show’s highlights reveals the bands best instincts to combine a swinging rhythm with big fat crunchy guitar riffs.

Alex Story is without question, one of the most talented and entertaining front men of any rock band touring in the last ten years. Even if you are not a fan of the band’s horror metal genre of music, it is worth seeing Alex Story ply his craft as a lead singer and front man live on stage. Sometimes terrifying, always ferocious, but also incredibly charming, smart, and often hysterical. Story presents an “I don’t give a f-ck” attitude while giving absolutely everything he has no matter how large or small the audience. What makes Doyle such a special band is Alex Story.

In top form at the Vault, everyone looked fit and healthy as usual. Caiafa is an outspoken Vegan and avid weightlifter. Although Alex Story has put on a few pounds since his last live performance, he remains in the condition required to put on a very physical performance. Without the usual scaffolding or rafters to climb at the Vault Music Hall, Story seemed a measure more tame than usual. He may have been working off some cobwebs after having not performed for a live audience since before the pandemic. Caiafa was his usual self, prowling the stage like a caged animal. Not known as a technical or nuanced guitar player, his sound on Friday was pure hard rock perfection and he sounded like he may have spent some time improving his guitar chops during the band’s extended hiatus.

Wade Murff (Drums) and Brandon Strate (Bass), who have both been in the band for several years also looked and sounded great. Both made it their business to stick around and interact with fans after the show, Murff making sure every last set list was handed out to anyone who wanted one and also a giving out a few souvenir drum sticks for good measure.

Click here for a huge gallery of photos of DOYLE from this night.

Salem’s Childe from Indiana are opening for Doyle on the US leg of the tour played a solid set of melodic scream core. “We were only able to play out a few small shows during the last couple years,” said vocalist Johnny Oravsky when announcing this tour with Doyle. “I’m stoked to be able to get out in front of people and play our music!”

Check out the gallery of photos of Salem’s Childe here.

Locals On Your Deathbed and Murder Ride opened the night. On Your Deathbed had some technical issues that unfortunately cut their set short. However, they made the most of their short time slot, playing a great, aggressive high energy set of new songs from their soon to be released EP, “Last Road to Hell”.

The talented Bob Mendell and On Your Deathbed will be back at the Vault in October opening for Mac Sabbath.

More photos of On Your Deathbed HERE.