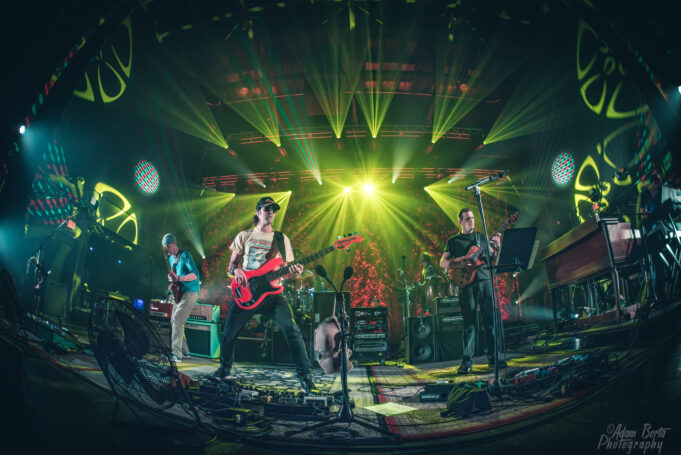 Umphrey’s McGee was back in action last night in Columbus, Ohio for their first performance in the Arch City since the pre-pandemic days. I was 1000% ready for the musical healing that was to be delivered by Umphrey’s complex mixtures of rage, terror, euphoria, and beauty.

As one might expect, Umphrey’s McGee came and were not about to beat around the bush. Hard, infectious dance beats filled the room and everybody’s best moves were on display. The band opened the show with “Miami Virtue” into “Crucial Taunt” and we could immediately feel the beginning effects of Umphrey’s patented mind-control techniques. The way this band can seamlessly go from terrifying-monster-vibes into pegasus-being-pet-by-a-goddess-vibes is just ridiculous. The rest of the first set featured “Half Delayed”, “Red Tape”, and “#5”, finishing with “Whistle Kids” into the 20,000 pound beast of a song that is “Wizard Burial Ground.”

The second set began with “Pay the Snucka”, turning Kemba Live! into a hip-hop-hard-rock party. The band had me in a trance and the voice in my head was nowhere to be found. They then sent the crowd into an uproar as they transitioned into “Bad Friday”, and then into “Draconian.” There is something that is just so profound about the feeling of bigness that comes from this band’s music.

Every time I closed my eyes, I saw the face of a monster with huge jaws biting down on each beat laid down by Kris Myers and Andy Farag. And then, with blood dripping from his mouth, this beat gives way to a soaring, ceiling-breaking solo from guitarist Jake Cinninger.

The effect of Umphrey’s musical juxtapositions can make the listener feel like they are experiencing an odyssey of all of life’s fun, horror, mystery, and badassness — sometimes all in a single song. Umphreys second set included “Speak Up”, “Robot World”, “The Weight Around” and then finished with the band going back to “Pay the Snucka.”

Check out the review of the after show with Death Kings, featuring members of Umphrey’s, Aqueous, Fernway and Turkuaz.

I had brought two friends with me tonight who had never seen Umphrey’s before and now both of their faces were red and mouths were wide open.

As the band came out for their encore, keyboardist Joel Cummins opened things up with an insane Bach piano intro, and then played “Kimble” into “Partyin’ Peeps”.

Check out the review of the after show with Death Kings, featuring members of Umphrey’s, Aqueous, Fernway and Turkuaz.