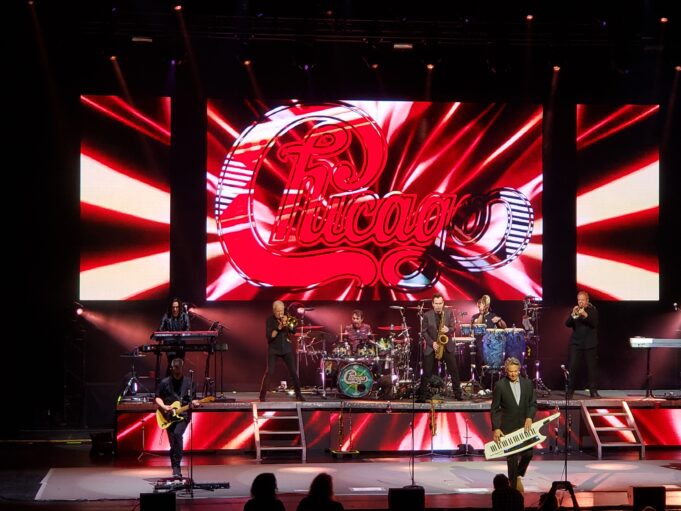 Words and Photos by Larson Sutton

Fifty five years is a long time to do anything, let alone remain one of the most successful American rock bands of all time.

For Chicago, two sets and over two hours of music still wasn’t enough time to acknowledge every single unforgettable moment of the group’s illustrious past. Yet, for a capacity crowd filling the Fred Kavli Theatre at the Bank of America Performing Arts Center in Thousand Oaks, California, it was as close as possible to a fully immersive, comprehensive, and musically compelling concert celebrating five-plus decades of this iconic band on this chilly Tuesday in late February.

It’s a delicate thing- to deliver such memorable lines and melodies without imitation- and Obrohta and Donnel are more than capable of such, with conscious taste and talent.

Accordingly, the set hugged closely to the definitive Chicago peaks, opening with Lamm (on keytar, no less) fronting for the brassy and propulsive “Introduction” and “Dialogue (Part I and II),” before some of the early incarnation’s lighter pop took hold, with standout takes of “Make Me Smile,” and “Colour My World;” the latter featuring a beautiful flute crescendo from multi-instrumentalist Ray Herrmann. The set closed on a charged “Now More Than Ever.”

The second half kicked off with “Alive Again,” as the faithful fans- represented by a range of three generations in attendance- filed back in, then were on their feet for a pair of classics, “Does Anybody Really Know What Time It Is?” and “Old Days.” The Cetera ballads were highlighted with note-perfect renditions- “Hard Habit to Break” and “You’re the Inspiration”- and as a testament to the band’s masterful variety of rock and pop forms, followed with rousing runs of “Beginnings” and “I’m a Man,” leading to one of the evening’s stellar moments among many: a brilliant percussion showcase for drummer Walfredo Reyes, Jr. and percussionist Ramon Yslas, who at one point traded places seamlessly without pause, then back again.

The final sprint in this marathon show started with “Saturday in the Park” which dovetailed into the back half of “Feelin’ Stronger Every Day,” and a wave good-bye, only to return for a dazzling two-song encore of “Free” and the indelible “25 or 6 to 4,” as Oborohta did Kath justice with his sparkling guitar work.

To see Lamm, Loughnane, and Pankow surrounded by a battery of such wonderfully skilled players makes this so much more than a legacy band making a congratulatory appearance. This is a viable classic rock group, having fun, and delivering a concert that covers all 55 years of excellence. Pankow, as Lamm says, still makes the trombone sexy, as Loughnane’s trumpet and vocals resonate, too, with parallel power and grace. Lamm remains a humble and commanding band leader, offering self-deprecating asides and impassioned performance; defying age and time. In short, to echo a Cetera lyric, for a Chicago fan, it’s everything they’ve ever dreamed.