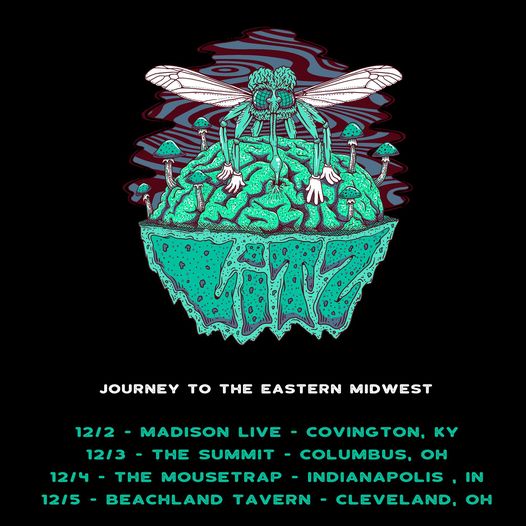 December 03 2021 The LITZ perform at the Summit in Columbus Ohio. Review by Jack O’Handley of Rubix Wheel.

It was Friday in Columbus-  I mapped out a way to the show that night in my mind, and was on my way, despite having been up since 6 am.  I drove to Sam Ash to buy a Pedal I had been waiting to purchase, The EHX Mono Synth to be exact.    When it was time to go, I drove around the corner and found a nice spot to park.  LITZ was in the house, and I said a quick Hello to some old friends at the bar.

There was an opening act, and I caught the tail end of their show.   Between bands I met new friends and saw a lot of happy, smiling faces.  LITZ hit the stage and started the show with Strange Train.  Austin Litz began with a keyboard vocal to draw the crowd in, then the whole band started up and the party began. What a wild ride it was.  I found myself among maybe forty other people, dancing near the rail at the front of the stage.

LITZ are four excellent players, with great songs and a super tight sound.  I finished my first burst of enthusiastic dance moves and went outside to cool down a little.  A couple deep breaths of fresh air and I was back inside enjoying the show again.  Rock Bottom and Summertime Blues were awesome tunes.  The songs LITZ played ranged from cryptic classic rock, to ragtime, to jazz, and some straight up funk.

The band would change the tempo during the song to keep the audience guessing.  There was never a dull moment in the show, and no stopping in between songs.  It was a high energy party, but in the dead of Winter, and it felt like Summer.

The morning of the show I looked up the band on youtube, and noticed that the keyboard player not only played keys and sax, but also flute.  This touched my heart when I saw how talented this man is.  An old friend of mine was a flute player, and we used to jam together(improv) on campus.  The spirit from the terrific music and woodwinds seemed to cast a powerful, sentimental spell over the crowd that night.

People were friendly and relaxed, the way shows are supposed to be.  But the attendees were so into this band, they couldn’t stop dancing, hootin’, and hollerin’.  I was one of those folks.  Forty of my new best friends having the time of our life, and a terrific group on stage to entertain us.

As I drove home I felt like I had just played a show, and anyone who has played a show knows what I mean.  This feeling was great, it was just a new one for me as an attendee rather than as the performer.

As a concert goer, I would say LITZ is one of the best bands out there right now.  Dance music and positive vibes all around.  Try to make it to one of their shows, or better yet a festival set. you won’t be disappointed.  They bring the party, and they’re not new on the scene- pro players, great originals, and plenty of youtube pro-shot shows for you to check out.

Jack O’Handley is an avid music fan and is in the band Rubix Wheel. CHECK OUT THEIR MUSIC 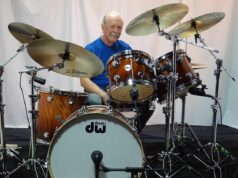