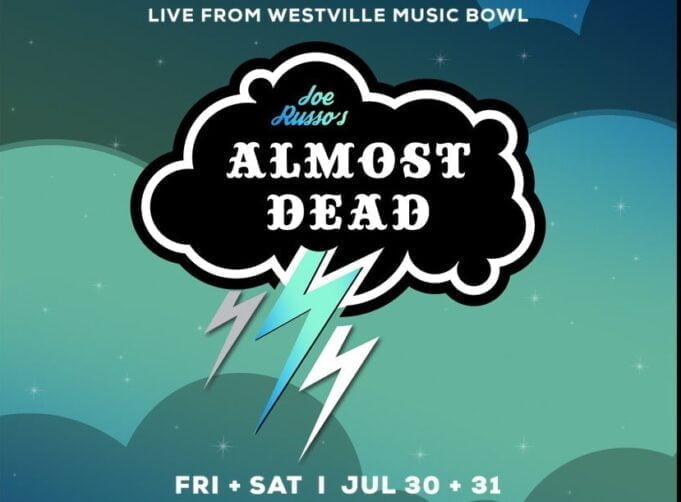 Last night, Joe Russo’s Almost Dead returned to the Westville Music Bowl in New Haven, Connecticut for the third time this year, and as the old adage goes ‘third time’s a charm.’ The band was welcomed to southern New England by mild temperatures and low humidity, marking a striking difference from the prior two runs. As we made our way to the main gate one fan remarked that we had finally been granted our ‘Goldilocks Moment,’ meaning everything was just right.

Joe Russo, Dave Dreiwitz, Scott Metzger, Tom Hamilton, and Marco Benevento took the stage promptly at 6:30 PM. They began with a jovial “Friend of the Devil,”which had not been played since January 2019 at the Capitol Theater, followed by a foot-tapping “Jack-a-Roe” also sung by Tom Hamilton and featuring excellent keyboard work by Marco Benevento. “Black Throated Wind” followed featuring a rousing “Jack Straw” jam.

The band jammed on the outro and landed heavily on “Jack Straw,” which is always a set highlight. “Wharf Rat” followed which featured several “Dark Star” teases and one possible “Tell Me Mama” tease which was pointed out by my show mate Evan. “King Solomon’s Marbles” finished out the band’s first set of the evening which features some great, technical drum work by Russo.

At the conclusion of set one Joe thanked the crowd and called the band, promising to return after a short break.

Check out the night two review for July 31 2021 of JRAD in New Haven here.

Joe Russo’s Almost Dead was back for Set II just before 8:30 PM letting Marco take the lead on the opening jam, along with Bob Dylan & The Band’s “Yazoo St. Scandal” sung by Benevento and featuring a few “Tennessee Jed” teases. The band followed with a deep jam which featured Phish’s “Maze” teases, eventually landing on an astounding “Golden Road To Unlimited Devotion”.

“Althea” followed which contained a broad, almost orchestral intro by the whole band and is sung with a delicate passion by Tom Hamilton. It was certainly a stirring moment for fans inside the Bowl and it was further enriched by a spaced-out “Lost Sailor>Saint of Circumstance”. “Lost Sailor” features “Let It Grow” and “Playing In The Band” teases throughout, and “Saint of Circumstance” featured “Terrapin Station” teases, along with the Four Tops’  “I Can’t Help Myself” teases.

The band next welcomed special guest, Eric D. Johnson from Fruit Bats on acoustic guitar and vocals for “China Doll,” which had not been performed by JRAD for 101 shows. Johnson also led the band through a folk sing-along “Box of Rain,” concluding Set II. Russo thanked the crowd and called the band once more, once again thanking Johnson for his contributions.

After a brief pause, the band returned along with Johnson for a double encore. Hamilton, who truly proved to be the showcase of the evening led the band through “Never Been to Spain”. A few weeks prior to the show, fan David Turner requested the song at a private show which featured Hamilton. Although Hamilton hadn’t fulfilled the request right then, he certainly made up for it last evening.

For their final encore, the band pleasantly surprised us with a Fruit Bats song titled “When U Love Somebody”. The song was only performed by the band once before in August 2019 at the Greek Theatre in Los Angeles and was rumored to have been a request by Russo’s wife. The band thanked the crowd once more and Joe welcomed us all back for Saturday night’s show.

Check out the night two review for July 31 2021 of JRAD in New Haven here.