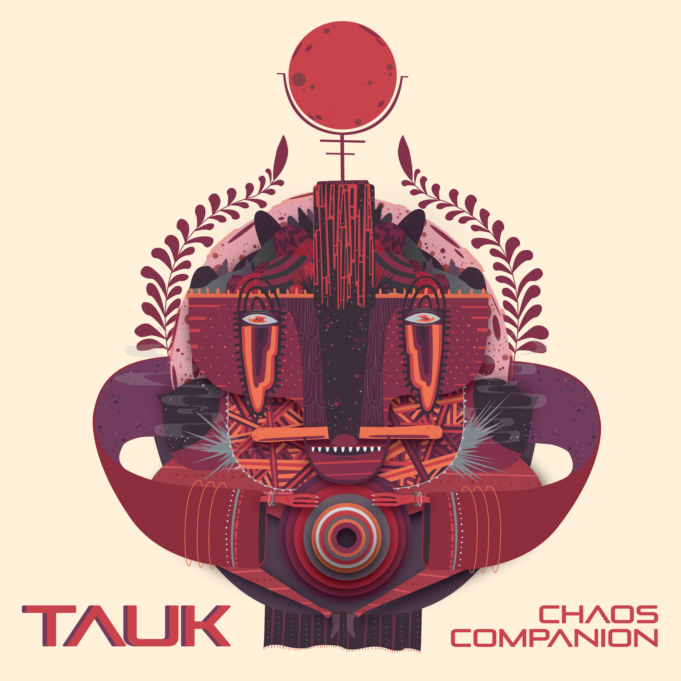 The wait is finally over for fans of electro-prog four-piece, TAUK, as they announce a full-length instrumental LP, Chaos Companion, due out September 24th. Over nine tracks, Chaos Companion is a cinematic collection that hints at everything from 70’s film scores and 80’s video games to 90’s R&B and modern dance music. The immersive record blurs the lines between analog and electronic as it balances old school grit and futuristic sheen in equal measure.

Pre-orders for the album and brand new merchandise are available now via hellomerch.com/collections/tauk.

Speaking about the album title, bassist Charlie Dolan reflects, “Everyone’s got a chaos companion, something that keeps you grounded in the midst of all the madness. Maybe it’s your spouse, maybe it’s your kids, maybe it’s your dog. For us, it was the music.”

Recorded at the band’s newly completed studio on their native Long Island, Chaos Companion is a work of profound comfort and catharsis, but also a testament to the kind of growth and evolution that can emerge in the face of struggle and uncertainty.

“This past year presented us with more time to be creative and delve into our artistic expression,” shares keyboardist Alric Carter. “Recording Chaos Companion opened up new avenues for us to explore and stands as a story of our time spent together. It has been super exciting to collaborate and pick from a wide variety of new songs to make this album.” On the expressive video releases accompanying the singles from Chaos Companion, Carter elaborates, “We’ve been able to share that story visually too with the music videos we’re rolling out. Music tells a story. Its makes us laugh, smile, feel and we’ve been having a blast showing that side of us.”

Accompanying today’s album announcement, TAUK invites viewers on a surreal New York City date with the official video for “The Let Out,” the second single TAUK has shared from the upcoming LP. Join Sammi Garett (Turkuaz) as she initiates a dream date that ends up leaving a lot to be desired.

“Recording Chaos Companion opened up new avenues for us to explore and stands as a story of our time spent together,” Carter shares. “It has been super exciting to collaborate and pick from a wide variety of new songs and concepts to make this album. With ‘The Let Out,’ the song came first and the video concept followed. We wanted to mix the sexy swag of 90s RnB and mash it with the raw energy of Rage Against the Machine and see what happened.” Commenting on the video, he adds, “Imagine the perfect post-pandemic date or pick-up: it’s been hard enough going eighteen months with such limited human connection, but you’ve managed to make all the right moves. Everything is going right except sometimes your head is just too big for your own good.”

Guitarist Matt Jalbert further reflects, “Why is his head so big? How did it get like that? Why is the girl so into it? We don’t know the answers, we just knew it would be hilarious.”

“Not dissimilar to ‘Moon Dub,’ when Isaac first pitched me the concept for ‘The Let Out,’ I could see the entire video in my head,” remarks Barbieri, who is credited as the director and producer for the video. “I reached out to my best friend [Sammi Garett] immediately, and lucky me, she loved the idea and was on board! I was excited about creating a narrative driven video that explores a woman’s desire and sexuality, while keeping a strong sense of humor tonally.”

Garett adds, “This was so much fun to be part of! I love acting and so I was super excited when Dani and TAUK asked me to be in their music video. They are family, so it was really easy and a total blast working with everyone in this capacity on and off set. All my improv comedy classes I took at Upright Citizens Brigade definitely paid off!”

In support of Chaos Companion, TAUK is hitting the road this fall and has announced support for many of their upcoming October 2021 tour dates. The tour welcomes support from bands like Eggy, paris_monster, Subcontra, Captain Midnight, Waker, The Orange Constant, Cycles, and LITZ. Additionally, TAUK has added a play at Ardmore Music Hall on August 21st and a club date during the second week of Jazz Fest on October 14th, which is slated to be a Parliament Funkadelic vs. Sly & the Family Stone set. A full list of dates and corresponding support can be found on the band’s website and below.

More About TAUK:
TAUK may be an instrumental band, but even without words, the group’s extraordinary new album, Chaos Companion, manages to speak volumes about the ups and downs of a year that challenged—and transformed—us all. Forced off the road by the COVID-19 pandemic, the quartet spent 2020 stretching themselves sonically, leaning into the sense of possibility that came with an empty calendar and letting it guide them toward uncharted territory. The resulting songs push TAUK’s sound to bold new heights, fusing elements of progressive rock, funk, soul, EDM, and hip-hop into a melodic, groove-driven blend, one that’s complemented here by the equally adventurous production work of longtime collaborator Robert Carranza. Add it all up and you’ve got a cinematic collection that hints at everything from 70’s film scores and 80’s videogames to 90’s R&B and modern dance music, an immersive record that blurs the lines between analog and electronic as it balances old school grit and futuristic sheen in equal measure.

Founded by bassist Charlie Dolan, guitarist Matt Jalbert, and keyboardist Alric Carter, who began playing together in middle school, TAUK landed on its present lineup in 2012, when drummer Isaac Teel joined full time. Since then, the quartet has gone on to tour with the likes of Umphrey’s McGee, Widespread Panic, and Lettuce, landed festival slots everywhere from Bonnaroo to Electric Forest, racked up millions of streams, and released a series of widely lauded studio and live albums.