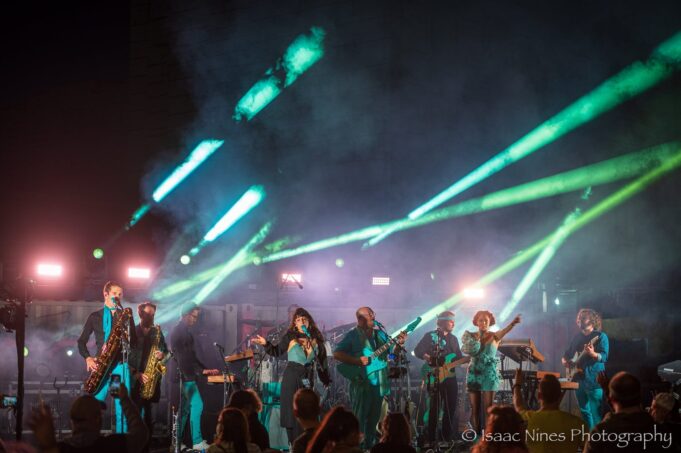 And just like that, my year-long, live music drought was brought to an abrupt halt in Norwalk, CT. The nine-piece power funk phenomenon known as Turkuaz took the stage at Art Park just outside the Wall Street Theater on Sunday night to clear skies and an eager crowd. The months I spent squinting into my small rectangular phone at live streams via Facebook seemed almost frivolous now. It would be laughable even. if our planet wasn’t in such a dire situation. But Sunday night brought us closer to normal than we’ve seen in over a year and I’ll take whatever I can get.

Now the setup may have looked a bit different with the enforcement of COVID rules, but the vigor was not lost.  With the purchase of a ticket you were assigned a “pod”, which was essentially a 4ft x 4ft piece of blacktop. That was your area, and masks were to be kept on unless eating or drinking. There were little to no issues as everyone was focused and ready for the main attraction.

The air was charged and heavy with anticipation so by the time the first note of “Make You Famous” hit, you could tell the party was green lit.  Donning a universal turquoise color theme the band took on a look of extreme elegance. They didn’t waste any time showing the crowd what they’ve been up to during this forced hiatus with a new song named “Knock, Knock” and then quickly unleashed a string of Turkuaz classics. “Club Foot”, “Gremlins”, and “Toolbelt” were played without a hitch. I felt a piece of my soul grow back and my feet just fell right back into place, dancing.

“Ophidiophobia” is another new one they broke out to an enthusiastic audience. Written with Jerry Harrison and Adrian Belew of the Talking Heads, it has that same fast, funky groove similar to “On the Run” and “If I Ever Fall Asleep”. From there the band just skyrocketed into the stratosphere. Vocal virtuoso and baritone saxophone player Josh Schwartz took the lead for “Babies Making Babies.” It’s always so impressive to witness live the range in that man’s voice.

Check out the interview with Turkuaz’ Sammi Garrett by Christopher Snyder in 2016 here.

Shira Elias came out with soul-quenching “Gogo Mr. Dodo.” The surprise of the night came when the band broke out a rendition of Billy Squier’s “The Stoke”. They always choose a cover that no one expects yet everyone knows. I mean, who covers that song?!?  Well, I should ask, who covers that song and does it even better than the original? I’ll give you a hint. It starts with “T” and ends with “urkuaz”! And they did it with a gusto that seemed to be conjured up from the bowels of some dingy New England night club in the early 80s.

After a couple from their album “Digitonium,” the tracks “Generator” and “European Festivity Nightmare” they ended with a very suitable and energetic “Back To Normal”. The encore was fan favorite “Bubba Slide” and with that the show was over.

My emotions , which are still playing do-si-do with each other days later, are many. I’m, of course ecstatic just to be able to see live music again. I’m also hopeful that things are finally turning around for all my friends in the music and entertainment industry, and not just the musicians. I’m nervous things won’t fully come back the way we all want them.  But with this one show, I don’t think I speak for just myself only when I say- it’s just so revitalizing!

Live music is back! And I’m ready!

Check out the interview with Turkuaz’ Sammi Garrett by Christopher Snyder in 2016 here.