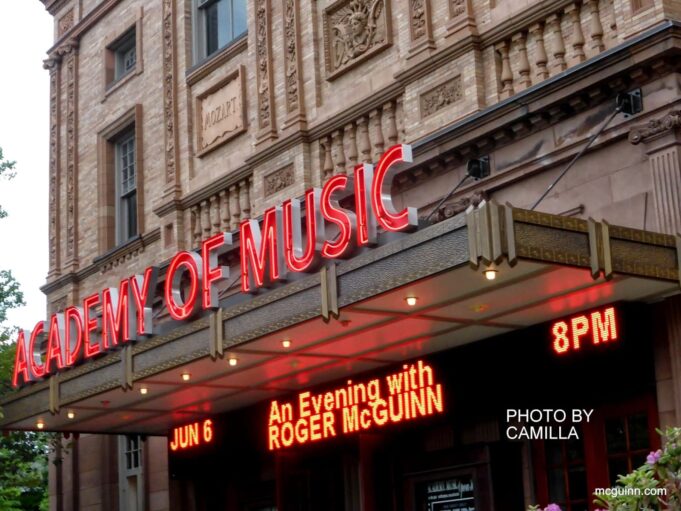 The Academy Of Music, Northampton, MA June 6, 2014 by Eric Sutter

Folk minstrel and living legend Roger McGuinn of “The Byrds” fame appeared at the Academy of Music with his collection of guitars and banjo. Possessed with a strong personal magnetism, he shined with song and story about his life in music. A good singing of Dylan’s, “It’s Alright Ma, (I’m Only Bleeding)” with the chiming jangly sound of his 12-string Rickenbacker guitar was met with enthusiastic response.

McGuinn was in warmly fine voice with acoustic folk ballads “Pretty Boy Floyd” and “Ballad of Easy Rider.” Lively stage banter about “The Basement Tapes” preceded Dylan’s great country-rock tinged “You Ain’t Goin’ Nowhere.” His musical mix included an Appalachian banjo tune, the propulsive blues of “Rock Island Line” and the wayfaring psychedelic rock “5D (Fifth Dimension).” His stories paralleled his song writing career. “Grapes Of Wrath” was a moving song with lyrics about the movie of the same name.

Familiar originals “Lover of The Bayou” and “Chestnut Mare” were pure bliss with the audience taking obvious delight in a sing-along. The close and personal format of the performance lent to an intimate and uncluttered feel. The fun-spirited sea shanty, “Randy, Dandy Oh” integrated McGinn’s trademark vocals and magnificent acoustic guitar work. The traditional ballad, “The Water Is Wide” played well alongside the jangle-pop folk rock “Mr. Tambourine Man” and “Turn, Turn, Turn.”

McGuinn’s true mastery of guitar was exhibited on the jazz-raga-rock 12-string guitar rip of his hit “Eight Miles High.” He specifically name-dropped his Byrds’ band mates with a special nod to Gene Clark who co-wrote many folk-rock classics. In his remembrance, McGuinn sang “I’ll Feel A Whole Lot Better” with the Rickenbacker guitar sound. Closing with a sincere rendition of the Irish blessing, “May The Road Rise to Meet You,” one could not help but feel a special musical evening was shared.

Incidentally, the Rock ‘n’ Roll Hall of Fame-r was listed as the “95th Best Guitarist” in Rolling Stone magazine.

Drop us a line at [email protected] to say hello, or to submit your live music news, review, or event preview. How about a concert memory like this one you just read? Tell the world about it.

Also: check out the search feature in the upper right of the website. Search for your favorite artist, genre, venue or event. We have literally thousands of articles many of which include exclusive content like audio and video you can’t find elsewhere.