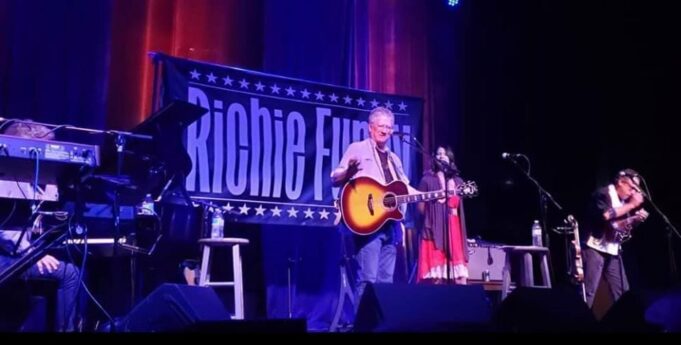 I got to the venue exactly on time; sat in my specially selected ‘solo section’ back row seat, nice an’ cozy… announcer came out, made a couple of comments, and then said: “Tonight we’re going to upgrade one seat in the mezzanine to the front row- Jimm O’D, come on down!”

And so, for two hours the only thing between me and Richie Furay was his microphone stand and the space of just a few feet, while I enjoyed the show seated next to the Artist’s Manager, the most gracious David Stone.

The show was excellent, of course. Anyone who has ever been to a Furay show knows he’s a great performer. His singing, like his songwriting, is truly a work of craft. Some few might call this craft quirky; those are the ones who go for their art in straightforward fashion, eschewing an affinity for the genuine, ole time twinge of a mountain tenor twang. Such can be lost on some souls. They don’t so much go for a song like “Crazy Eyes,” even before the singer hits the high notes… “Crazy Love” on the other hand, from the old band’s later phase… right up their pop alley, while being no less fun for all.

Richie performs as a great entertainer imbued with enough humility to keep from going over the top in any way. He’s not “too much” of anything, even as he is unmistakably original. His banter, just enough of it, amuses and informs while reminding us that his pedigree and caliber make him a bona-fide Hall-of-Famer. The energy he puts into his performance shows a youthful heart, and the joy of God shows in his playing. And he looks great!

Furay’s daughter Jesse Lynch opened the show with the band, tearing through a few familiar rockers with ease and style. This is a family affair, and an efficient operation- no need to call in outsiders or have the house call in some lucky locals. The second set was a rare treat indeed, as former band-mate Rusty Young (POCO) came out with another preliminary segment, singing (he’s been doing that for a while now) and playing a few acoustic numbers with his immaculate skill. Rusty is pretty funny too, and he tells a story well. It’s hard to believe he’s the same skinny kid who used to stand behind his steel and stay behind the scenes, content to let others have the show for the most part.

A nice surprise came in the form of a DVD presentation for Richie’s 70th. A few dozen friends and family and former band-mates offered up stories and well-wishes, with only one or two I couldn’t quite place. Jim Messina started it off, and then a virtual parade followed. It was especially gratifying to see among the presenters were the great Al Perkins and Chris Hillman, both fan favorites for many. It seemed like they got everybody who’s anybody, even down to folks one might have thought to be a tad less public, like Gabe Katona (who the lady to the left knew just fine). And some extra video covered the rest, like the old RF bands with John Mehler Drums and Bassist Bill Batstone, reminding us that it’s all Legacy and not merely phases to be passed over in passing. in fact, none other than Cameron Crowe has a movie in the works to showcase the substantial figure that is Richie Furay.

Rusty Young, himself partly the reason for ponying up and pony-riding over (big bucks and a long ride), joined the band for probably half the show. He came and went, adding his touches and his presence in just the right measures at perfectly timed moments. Not having heard of Rusty playing along at a show of Richie’s in this way, it seemed good reason to fork it over and make the drive, forsaking all other considerations. Besides, a 70th Birthday doesn’t come along too often.

When George Grantham came out to add vocals to few songs , it figured that this is probably the closest one is gonna come to a Poco reunion. Rusty did say that “there will be no more Poco albums,” which is not surprising at this point, though he did have one more in the works at the time. And they do all show up at each others’ show every here and there. Spotting George’s autograph on some posters suggested that this was a Special Event indeed. Toward the end of the show, an even bigger surprise came in the form of ex-Turtle Mark Voorman, a guy who played a big part in Richie’s early career by letting him crash at his place for a while back in the day. Richie was clearly touched by this surprise appearance.

The set-list ran through a presentation of older Poco songs and newer Furay songs, with the necessary nods to Buffalo Springfield and the Souther-Hillman-Furay Band (no Au-Go-Go tho). The composer’s crowning opus, “Crazy Eyes,” had been recovered by current Furay Band guitarist Scott Sellen and re-introduced at his insistence a year or two earlier.

Sellen proves himself to be a fine musician -amazing, really- and a good sport by switching back and forth between guitar, banjo, and steel, and even keys in all the right places as that nine-minute monster marched through its many changes. One might suppose he had an easier time of it this time, thanks to Rusty’s input. While earlier performances may have even more exciting as the band was then charged-up to play the classic renewed anew, it is no small accomplishment then or now- the homage to Gram Parsons is a massive and complex composition.

A number of tunes were from an upcoming release, so there’s a teaser… a reason to look forward. All throughout, the show was a great showcase for the star, for his songs and his voice. Being right up front, Richie’s guitar came through as a clear reminder of what a fine player he is. He performs well, with reasonable antics and enthusiasm.

His tones are clear and soothing to the soul. His techniques are touching and quite expert, and he displays them all comfortably without making a big show of it. He plays with the ease and subdued panache of an expert, a gracefully aging gentleman. Not usually classifieed among the greatest or flashiest of players, once we pay attention, we see that the skill is top-notch and world-class.

Richie Furay’s playing is every bit as smooth and classy as those vintage Gretsch guitars he favors. Richie seemed really touched many times in the evening. Much seemed singularly special to this particular event. Richie is a man of God, we know that.

We all know the story; it’s part of the deal… one effect of this fact is that we have an artist with integrity: we can assume the guy is honest, even amid the profession and persona. So, when he chokes up and blinks through a couple of tears (I’m right up close, remember), we know it’s real. Looking back, I realize I really came for that as much as the “bonuses.” I can stay closer to home and see this band at the Iron Horse in Northampton (as I had a while before), but in this case I felt the calling.

Incidentally, ain’t it great that we live in a day and age where we’re all more accepting of diversity than back when record deals and promotion depended on one’s category or classification. Well ok- truth be told, they still do… but some are able to “rise above” all that: case in point, this man Richie Furay.

In the end, the experience I had was a singular one for me; the performance was great, I had a great time, and my spirit was every bit as uplifted as at my last RF show.

I hung out for a while after the show and waited for the marker-in-hand folks to do their business, and then I found my moment to approach the Big Guy (he is that). I shook his hand and suggested he come and play when I turn 70- which he took to be in about 20 years, thank you very much. I let him know I’d been with him since his first solo album in 1976, tracking back through Poco’s catalog and following forward from there while double-tracking their ever-increasing and over-lapping output over the years. He listened patiently and smiled graciously, of course.

I managed to assure the star that he was still my “First Love,” which clever reference led him to bring up “Real Love” from his then-upcoming album. As it happens, that has become just about my most favorite of his newer songs- independently, though- I had quite forgotten our brief exchange until this write-up from six years back popped up today.

Meanwhile, just over a week ago, that song came to mind when a West Coast radio personality asked me to recommend a Richie Furay track to play for his birthday. Now, here’s the kicker- Richie is currently touring his 75th Birthday celebration. Where did the extra year go? I dunno, but more power to him!

Richie Furay’s 75th Birthday Concert, touted as his retirement from headline touring, had been scheduled for this past weekend. With current conditions, of course, the show has been re-scheduled. The new date for the “Farewell” show at SOPAC is Saturday September 12. At the moment, my back-row mezzanine seat is one of a very few still open.

Drop us a line at [email protected] with your live music review, news story, or concert memory.