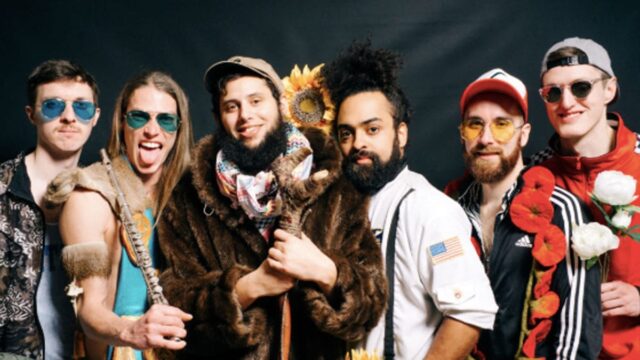 “Passing Through” from Paper Castle video out now

Sprightly, funky and folky Joe Hertler & The Rainbow Seekers bring a sweet and gentle touch to the life cycle with their brand new video for “Passing Through,” a track from their fourth studio album Paper Castle. Directed by Kevin Romeo, the ethereal video–which made its debut via American Songwriter—can be watched here:

“The reality is that time is a currency—and we all have an undisclosed amount to work with,” confesses frontman, Joe Hertler. “‘Passing Though’ is perhaps a reminder to myself to step back and appreciate being alive, because life is a gift.” With ocean waves crashing and angelic imagery, the visual combines the band’s distinctive warmth with the touching milestones of life, cycling through birth to adolescence, to marriage and the end of life. “I’ve always been fascinated by death, both literally and figuratively; the finality of all things. From mountains to men, we will all change and we will all end. But it’s the brevity of existence that gives life meaning…life doesn’t really ask us to do anything but exist and be decent, because we’re all just passing through and someday we’ll all, sooner or later, have to step off the stage for the last time. Might as well make the best of it.”

Emerging from Lansing, MI, it was in 2011 that Joe Hertler(vocals, guitar) joined forces with Ryan Hoger (guitar) and the initial seeds were sown. In the following years, Micah Bracken (keyboard), Aaron Stinson (saxophone, flute, percussion), Jason Combs (bass) and Ryan McMahon (drums) came aboard and Joe Hertler & The Rainbow Seekers was born. Their infectious, radiant joy effortlessly blends with their rapturous frequencies and exuberant tone to create an atmosphere unlike any other. With their electrifying, magnetic energy, the band has captivated audiences across the nation from Bonnaroo to Electric Forest to Summer Camp and beyond.

Joe Hertler & The Rainbow Seekers are set to hit the road supporting Lawrence on a three-day Colorado run through Fort Collins, Boulder and Denver in mid-March. The end of March through mid-April brings a headlining stint from Cheyanne, WY to Erie, PA. Next, they join Here Come The Mummies for two Pennsylvania dates—Bethlehem and Pittsburgh—and a play in Lexington, KY on April 18th. From there, the band heads to Charleston, SC for a performance on April 22nd followed by a 420 Fest Pre-Party in Atlanta, GA on April 23rd. The band hits Tuck Fest on April 25th in Charlotte, NC before joining Twiddle for four dates beginning in Louisville, KY on April 28th, additionally stopping in Indianapolis, IN, Nashville, TN and Asheville, NC.

Three headlining Texas dates follow from May 7th through May 9th, with stops in Houston, Dallas and San Antonio. Joe Hertler & The Rainbow Seekers kick off their summer festival run with a return to Summer Camp Music Festival over Memorial Day Weekend, followed by appearances at Meadowgrass Festival, Middle Waves Music Festival, the 40th annual Gathering at Chaffee’s, Mile of Music Festival, Musikfest and Bristol Rhythm and Roots Reunion.

All newly announced tour dates are on sale now.

Live Music News & Review was born out of a love of live music and the wish to chronicle the amazing shows happening around the country. Stories and reviews are born both from our editorial board and from readers just like you around the country.
Contact us: [email protected]
6,374FansLike
254FollowersFollow
312FollowersFollow
10SubscribersSubscribe