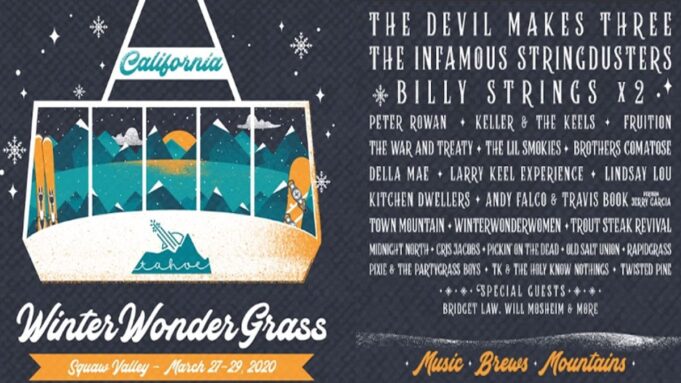 WinterWonderGrass 2020 is on the horizon and the festival is excited to share the official daily schedule for their Vermont edition, taking place April 10 & 11 at Stratton Resort in Manchester, VT. The placement of this year’s festival coincides with the end of the ski and snowboard season at the resort, and WinterWonderGrass plans to bring one heck of party to the mountain’s base to close out the year. Cabinet is also set to make their first performance post-hiatus over the weekend.

“WinterWonderGrass continues to honor the pillars of bluegrass while creating space for the evolution of the genre to flourish. I feel this lineup speaks to that ethos,” remarks festival founder, Scotty Stoughton. “I’m super excited to see first time bands like Twisted Pine take our stage and welcome back local favorites, Saints & Liars. I’m humbled Cabinet is coming out of hiatus to perform at WinterWonderGrass and it’s always a pleasure to watch The Infamous Stringdusters and Della Mae take the stage.”

Gates open at 1:45 PM each day during the two-day music festival, with music beginning at 2:00 PM. Pickin’ Perch and the Main Stage will see alternating sets for two days of nonstop music. As with past iterations of WinterWonderGrass, complimentary beer tastings will be held for all attendees aged 21+ from 2:00-5:00 PM each day throughout the event. Two of WinterWonderGrass’s local brewery and cider partners for 2020 include Fiddlehead Brewing Company out of Shelburne, VT and Burlington’s Citizen Cider.

Tickets for California and Vermont are on sale now but moving fast. Very limited single-day tickets remain for Friday and Sunday during the Colorado stop, which is otherwise completely sold out. VIP tickets to the California stops are also sold out, but fans are encouraged to check out the official fan-to-fan ticketing exchange powered by Lyte if they’re in search of tickets as more of the dates and tiers sell out:http://bit.ly/WWGxLyte.

Stay tuned for more information on Grass After Dark programming and additional beer partners for the 2020 season.

About WinterWonderGrass
Music, winter sports, craft beer, fresh eats, and family is what makes up the three days of the WinterWonderGrass Festival. With deep roots in Colorado, California and growing in Vermont, the event has established itself as a leader in the winter lifestyle culture where the quality of experience outweighs the notion of quantity. WinterWonderGrass is an intimate gathering where inspiration and connection sit at its core. Our community is focused on sustainability, local non-profit support, nurturing the next generation and truly backing the arts.

Since its inception, the festival continues to cultivate the relationship between nature, roots music and community. It has established itself as a vehicle for inspiration, a place where open hearts and minds–along with a dissolved illusion of separation–creates a true, authentic platform for artists, vendors, attendees and the planet to connect as one.

About Stratton Mountain
Located just four hours from New York City and three from Boston, Stratton is a premier New England mountain community with 99 trails fanning from the summit of southern Vermont’s highest peak, 95 percent snowmaking coverage, slopeside Village for shopping and dining plus a range of accommodations.  The first major resort to welcome snowboarding (1983), Stratton has offered an extraordinary ski experience since 1961. As a member of the Alterra Mountain Company family, Stratton is featured on the Ikon Pass, the new standard in season passes. Stratton was a leader in extending the season to summer back in 1964 with a Geoffrey Cornish designed golf course that played host to six LPGA tournaments. Lift-served mountain biking joins the lineup of activities, events, adventure challenges and live music, making Stratton a popular year-round destination. For more information, visit www.stratton.com.

Drop us a line at [email protected] with your festival preview, live music news, or live show review.