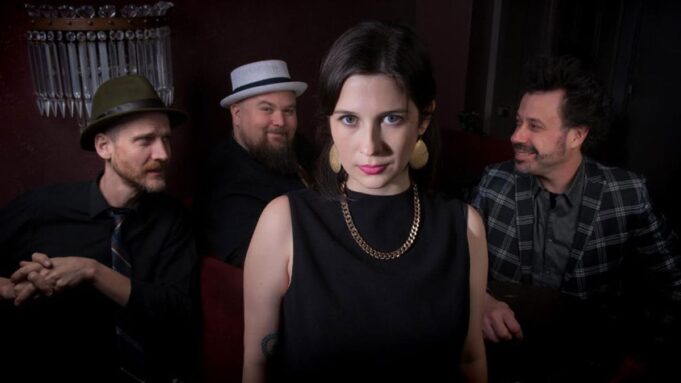 Claudettes co-founder Michael Caskey is back, bringing dazzling drum skills to the studio and an ebullient personality to the stage. In the wake of a series of sudden tragedies and deaths in the band’s realm — and amidst a countrywide mood of pessimism and contention — Johnny and Michael locked arms with Berit and bassist/guitarist Zach Verdoorn to create an album wearing its heart on its sleeve and, like the band’s much-talked-about live shows, overflowing with humor, love and a lust for fun.

After a series of phone conversations with bandleader Iguana, Hutt flew from L.A. to Chicago to listen to all the band’s prospective songs and arrangements for the new album. “As mellow as Ted’s personality is, he came out firing with lots of suggestions,” says Iguana. “Ted said, ‘Cut this section out, eliminate some syllables in this line, write a new bridge for this song, split that bass VI part into bass parts and guitar parts, lose this song altogether …’ Typically, all those corrections would have me standing my ground, as the songwriter. But we decided to try it his way, and it became clear: Ted is a great producer. These are all improvements.”

The band tracked for 10 days at Shirk Studios in Chicago, then Ted and Ryan Mall mixed at Kingsize Soundlabs in Los Angeles, with Ryan A. Smith’s mastering taking place at Sterling Sound in Nashville. “I love how our instruments sound on this album,” Iguana says, “but mostly I agree with what Ted said when he left Chicago to go back to L.A. He said, ‘I think this album is really going to get Berit known.’ She really tapped into the heart of these songs, and her tone is just the warmest thing you’ll ever hear.”

Some of these songs call out media-driven fear-mongering (“Most Accidents Happen”) and shameless contempt for the poor (“Grandkids, Wave Bye-Bye”). Tearful true stories of past drummers (“You Drummers Keep Breaking My Heart”) and bitter glances at a bottle of bourbon (“One Special Bottle”) are here, too, but romance and desire get the lion’s share of the attention, via “Bad Babe, Losin’ Touch,” “24/5,” “Declined,” and “I Swear to God, I Will.”

Perhaps the most transfixing track is “The Sun Will Fool You.” Over a bed of opulent yet desolate piano, Berit stunningly sings this song bemoaning a cold-hearted lover whom everyone else thinks is the life of the party. Award-winning Metalocalypse illustrator Dan Bigelow spent over a year creating a mesmerizing animated video for the song, along with his longtime artistic partner Talon Nightshade. The video has already won Best Music Video at film fests in Glasgow and Chile, and has been selected for the March 2020 Cinequest Film Festival in San Jose, California, which attracts over 110,000 people and was voted Best Film Festival by USA Today readers.

High Times in the Dark is the follow-up to the band’s acclaimed Dance Scandal at the Gymnasium!, the 2018 album produced by Grammy-winning Black Keys producer Mark Neill. All songs on High Times in the Dark were penned by Iguana, who has recorded with Junior Wells, Buddy Guy, and a host of other blues giants, plus his own punk-organ band, Oh My God.

With this album, steeped in classic American roots music and a piano-propelled approach that stands apart from all the guitar-driven bands in the blues and roots scenes, the Claudettes push forward with a blues-jazz-soul sound that’s eminently original and alive, with rock ’n’ roll drive and punk spirit.