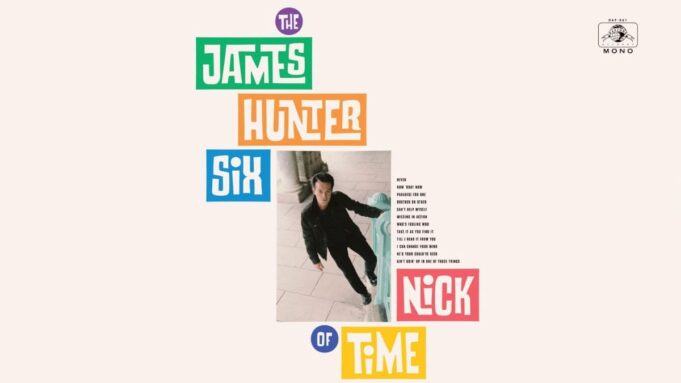 Daptone Records Releases Single “Brother Or Other” from New Album, “Nick of Time“

Back in the spotlight with a sublime new rhythm and blues record, James Hunter follows up six critically acclaimed albums with his latest recording, Nick of Time, set for release on Brooklyn’s renowned soul label Daptone Records. Nick of Time is a shining testament of how a master songsmith continually draws fresh water from a bottomless well. Recorded and produced by Bosco Mann, Nick of Time features one of today’s foremost soul singers at the top of his game performing with musicians who’ve backed some of the biggest contemporary music stars including Daptone artists Sharon Jones and Charles Bradley. Nick of Time will be internationally released on March 6, 2020.

Daptone Records releases today (January 15) the second single “Brother Or Other” featured on Nick of Time. The straightforward soul of “Brother or Other” (whose timely message is only tantamount to its groove) addresses the unjust notion of those who treat others unlike themselves with suspicion. Hunter lends a helping hand and encourages us to extend love to all mankind. He notes, “Divide and rule is the oldest trick in the book. When you’re poor, there’s always someone who can’t wait to tell you it’s other poor people’s fault.”

The first Brit to sign to Daptone Records, Hunter is revered by critics both in his native UK and stateside, with Good Morning America hailing his latest album, Whatever It Takes, as the #12 Best Album of 2018. Listed shortly after Paul McCartney and Soccer Mommy on the Top 50 album list, GMA notes, “the title-track, ‘I Don’t Wanna Be Without You,’ ‘I Got Eyes’ and ‘Show Her’ could have all been massive hits in the early ’60s, with a vintage sense of authenticity. It seems perfect that Hunter is currently signed to the famed Daptone label.” Of his other recordings, Rolling Stone dubbed People Gonna Talk, “a treat not to miss” and his second album “unbelievably awesome,” while The New York Times noted of The Hard Way, Hunter’s “tight, slithery groove” and “sweet growl.”

For Nick of Time, Hunter and Daptone co-founder Bosco Mann hunkered down in the label’s Penrose Studios in Riverside, California for what certainly will be one of 2020’s standout soul recordings. Unmistakably another stunning James Hunter album, Nick of Time is a voyage between beautiful, mid-tempo rumba recalling early King/Federal releases, while lush arrangements summon lost tracks from early ’60s Burt Bacharach sessions. Nick of Time is steeped in an era when soul records were driven by earth-shattering vocal performances. James Hunter hands down ushers classic soul music into the 21st Century with a sense of timelessness that’s rare these days.

The James Hunter Six — Nick of Time — Featured Compositions
Nick of Time opens with syncopated baritone sax, bass and drum parts setting the stage on “I Can Change Your Mind” for Hunter’s crooning message of having a love so strong he’s confident he’ll convincingly change his lover’s mind, even with a backdrop of untrustworthiness. “Who’s Foolin Who” channels Ben E. King records produced by Leiber & Stoller. The slow roll of fingers softly plucking an acoustic guitar that dances along with piano string crescendos, Hunter pens a tearjerker dripping with honesty.

“Till I Hear From You” hints at a new artistic direction for Hunter as he delves into Dave Brubeck territory with his first go at recording a song in 3/4. Featuring his recording debut on chromatic harmonica, Hunter professes about the track, “I think I had three tunes in my head when I wrote this number, including Ray Charles’ theme from The Cincinnati Kid, Lou Johnson’s ‘It Ain’t No Use,’ and Bacharach’s instrumental bit from Butch Cassidy and the Sundance Kid.”

Slowing things down to a simmer, “Never” catches Hunter with his guard down while Lady Luck answers all of his dreams with new love entering his life. “Missing In Action” sees a rare wartime theme in Hunter’s song catalogue. Though only spending a couple months in the Sea Cadet Corps at the age of 14, Hunter recalls, “I never saw action let alone went missing in it, but walking home dressed like Popeye the Sailor past pubs bristling with squaddies ensured I was always surrounded by the enemy. I was quite pleased with The Longest Day timpani and the machine-gun phrasing of the saxophones.”

The title track “Nick of Time” is a subtle nod to the widely hailed The Twilight Zone episode of a fortune-teller machine on a café table that answers yes or no questions for a penny each. Saved by love in the “nick of time,” Hunter is a changed man, and seen by his close ones with a different eye.

A fear of heights and a reluctance to ascend to the celestial realm of things drives the rollicking “Ain’t Goin’ Up In One Of Those.” Hunter follows the track by calling out those who just expect to receive love and respect, without returning it on “Take It As You Find It.” “Can’t Help Myself” references the infinite monkey and typewriter theorem, while “How ‘Bout Now” enters with a walking baritone sax and pays tribute to a common catchphrase of Hunter’s wife’s Jessie.

The sparse “Paradise For One” (that finds Hunter enacting his innermost Nat King Cole) enriches Nick of Time with sounds one may not readily associate with The James Hunter Six. Nick of Time concludes with “He’s Your Could’ve Been,” a song inspired by an ex of his wife, Jessie. Upon recalling no shortcomings whatsoever of this ex, Hunter pens a grateful number with no complaints.

James Hunter is an everlasting writer of compelling narratives sung with true grit while backed by an ace band of New York City’s finest musicians. Nick of Time finds Hunter in the company of Victor Axelrod (piano), Adam Scone (organ), Rudy Petschauer (drums), Myles Weeks (bass), Michael Buckley (baritone saxophone), and Freddy DeBoe (tenor saxophone). On the road for an extensive U.S., U.K., and European tour in support of Nick of Time, Matt Slocum (keyboards) takes the reins on keys for a hearty James Hunter Six ensemble ready to electrify soul music fans as they hit venerable stages in a city near you in spring 2020. For a comprehensive list of forthcoming tour dates, please see below.