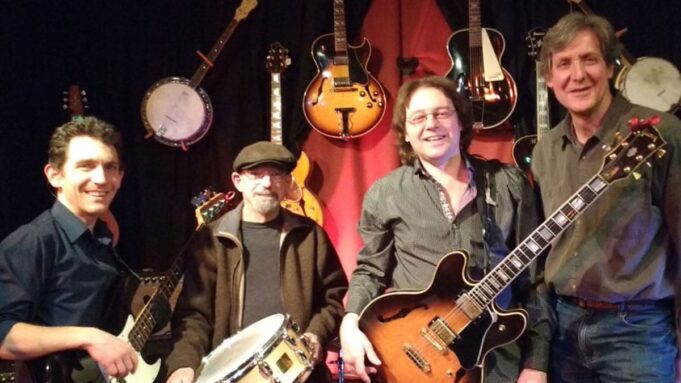 The Progression Brewing Co was host to Doug Hewitt Group on DEC 06 2019. by Jimm O’D

Take your favorite local jazz-man, put him in a pub full of intelligent and presumably educated and knowledgeable music fans, and watch the fun as he takes his band on a three-hour romp through an FM-ROCK repertoire. The hoots, the hand claps, and the enthusiasm around the room and on the dance floor were all good indicators of a gig going well, but the deal was sealed when all stayed just as engaged and enthusiastic through three originals in a row.

Granted, they were all uptempo numbers, one each from Doug Hewitt’s last three releases including the last his “Zen Cats” album; but still… to keep a few dozen folks moving and clapping when the three songs are all brand new to them, well… this is something of an accomplishment.  Otherwise, the set-list ran a pretty even spread across decades and styles, leaning toward that songs we should call classic.

Here’s the thing about the Doug Hewitt Group doing radio-rock, including his own airplay-worthy compositions: it’s like a study in jazz-rock a lá Los Angeles in the 1970’s (the Steely Dan scene), with the sounds and arrangements generating from the sensibilities of a bonafide jazz cat. But Doug is a great musician who digs rock and rock & roll right along with it- rather than the other way around. This is rock music coming from a foundation and orientation of actual jazz rather than rockers trying to jazz it up so as to get with a program.

There is a cross between Les Paul and Larry Carlton that comes through in Doug Hewitt’s playing- on the one hand, a 335 just has a sound; on another, there’s a quick, sharp, Django-esque inflection in his playing. This is not so much the pet project of a self-proclaimed guitar-god. Maestro Hewitt is a master musician whose primary instrument is the guitar; the result of this is as much about the arrangements of the music as the instrumentation, or the playing.

Lovers of leads and licks will find much to satisfy them. Listeners will see be thanks that as much attention is given to the other players in the group. Piano is covered admirably by Mitch Pine, who in particular, comes across as an accompanist closer to a right-hand-man than ‘just’ a player. This is especially evident when he backs up Doug’s vocals- the whole Pink Floyd montage takes on a dimension of depth beyond what the four instruments provide.

There are a lot of surprises here at Progression Brewery tonight. Elton John and Jackson Browne, for instance. A few ‘deeper cuts’ by otherwise overplayed artists- say, “Dear Prudence” or “Come Together,” both properly addressed and not assaulted in the least. It seems something about a McCartney bass-line that is a particular affinity for Mark Sims. The bass, the beat, the basic tone all come across as familiar, effective, and respectful. Sounds about right, too.

Likewise with Doug’s voice. The regular Hewitt fan, one familiar with the Group’s usual jazz orientation, is sure to be impressed, and maybe even amazed. Meanwhile, Alan Kurtz, the man most often seated at the drum kit when Doug Hewitt plays, keeps time and adds embellishments in exactly the way a drummer should: perfectly. Rock-solid and free-floating, this feller matches his output to the situation at hand, however dynamic and diverse that spectrum might run.

Doug Hewitt is a talent who should be renowned the world over. His brilliant songwriting is perhaps a bit left-of-center to land him on the pop charts, but his talent and skill- not to mention the immaculate production of his recorded releases- are the sort that could and should occupy a substantial cult following, and surely would, if the Cosmic Strings of Fate and Happenstance were to wind their ways in his favor as they do for some but not all aspirants.

All a humble scribe can do is profess and publish.

Drop us a line to [email protected] to submit your own live show review or news story. We’d love to hear from you.