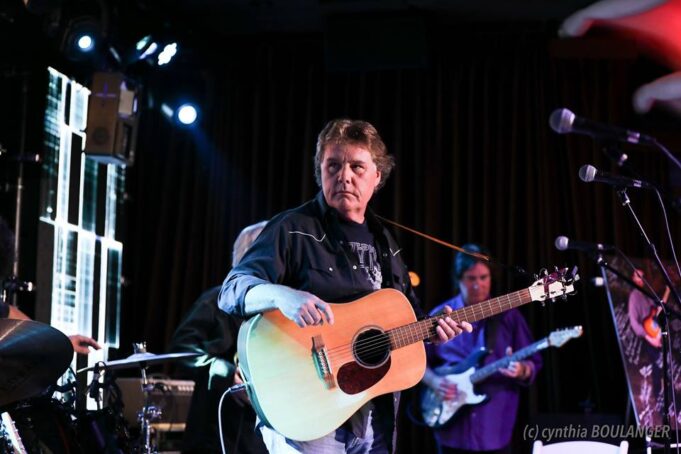 It’s not every day that your house threatens to go up in flames as you’re planning a mini tour 3,000 miles away a week later. But if your name is Sonny Mone, that’s exactly what transpired. Luckily, the former member of Crazy Horse is safely in New England after having a brush with natural disaster. Read below for our exclusive interview.

LMNR: So, Sonny, we’ve been hearing you had quite a week! Please tell us about it.

SM: Living in Southern California is an interesting thing. One day you’re cruising the beach on the way to a gig, the next day you’re trying to decide what your most important possessions are as you wait for a brush fire evacuation notice. I just experienced the reality of how fast things can change.

LMNR: Go on!
SM: We had a studio session booked for last Wednesday night when the Easy Fire broke out in Simi Valley CA, about 4 miles from my house. Watching the breaking news, at first I thought, “No problem, they got it.” Then the smoke start blowing over my neighborhood and helicopters and a DC10 water tanker flew low over my house- “Guess we’re cancelling the session.”

LMNR: Uh yeah, you would think! So then what happened?!

SM: We get emergency text notices here for major events. My phone started blowing up. Mandatory evacuations to within 1 mile of my house. One more text and we’d have to go.  So. What do you grab? Well, having collected guitars over the years my first thought, of course, was to grab them all. Then I realized I had family heirlooms, clothing, blankets, emergency water, etc. to grab for my wife, myself, my daughter, and three dogs. Not a lot of room left if we had to make a run for it.  Two guitars at most and possibly a gig case. If you own guitars, you can imagine my dilemma. A musical instrument “Sophie’s Choice.” The ’72 Guild? The ’74 Guild 12-string? The Stratocaster? The Martins? Against this backdrop I was preparing for my mini tour of New England. Lots to do. People to get in touch with. Promotion. Equipment. Lots to do. All on hold.

LMNR: That’s gotta be nerve-wracking, to say the least. Did you end up having to evacuate?

Thursday morning. Roads open. Usual traffic. Neighborhood’s quiet. Family safe – just like that. California normal. It’s part of living here. We take the great with the not so great. I feel real lucky and ready to hit the east coast. The only real change in my home as a result of all this, is my Martin guitars now have a permanent place by the front door. See you along the road!

A native New Englander, Sonny Mone originally intended to become a solo artist when he moved from the South Shore of Boston to Los Angeles in 1984.  Mone began his career as a folksinger, playing clubs and coffeehouses throughout New England. Living just outside of L.A. in ’86, he met the members of the legendary band Crazy Horse. Best known for backing Neil Young, they recognized Mone’s songwriting and passionate voice and he was asked to a rehearsal. “It was surreal,” Mone recalls, “I was singing “Cinnamon Girl” with ‘The Horse’! It was a real trip.”

During their on-again, off-again relationship with Young, Mone began developing songs with the band and in ’89 recorded the Crazy Horse album Left for Dead which was released in ’90 by Curb Records.  Mone continued to work with “The Horse” on studio projects and soundtracks well into the late ’90’s.​

As a solo acoustic artist, Sonny Mone has shared the bill with great players like Roger McGuinn from The Byrds, Dave Mason and Jim Capaldi from Traffic, Leon Russell, The Tubes, Tears for Fears, Dave Davies from The Kinks, and other well-known acts. He has also played live shows and recorded with talented musicians including; Matt Malley from Counting Crows, Victor Bisetti from Los Lobos, Dean Dinning from Toad the Wet Sprocket, as well as close friend and renown bassist, the late Rick Rosas from Neil Young’s band.​

Mone is currently performing as a solo acoustic artist performing originals and well known songs from the early folk/acoustic era.