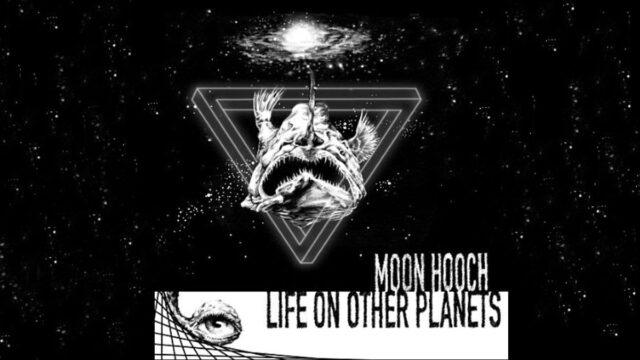 Announcing New Studio Album, Life on Other Planets to be Released January 10, 2020

Moon Hooch have announced their next studio album, ‘Life On Other Planets’ will be released January 10. Recorded in a series of stunning, single-take performances, the collection may be the purest distillation of the double saxophone and drum trio’s sound yet. There’s no studio magic here, just three musicians (saxophonist Wenzl McGowan and Mike Wilbur and drummer James Muschler) who share a telepathic connection that transcends language, genre and tradition. The nine tracks on ‘Life on Other Planets’ mix elements of jazz, punk, funk, and EDM, swirling them all into an instrumental maelstrom the band calls ‘cave music’—derived from house music, but more jagged and primitive. The basic song structures had been developed over five or six years of touring and experimenting, however the majority of the recordings were completely improvised on the spot, much like one of the band’s hallmark live shows.

“We bottled our concert experience and captured it on this album in a way we never have before,” says Wenzl McGowen. “This is the first album where our fans will be able to listen and say, ‘This is exactly what it’s like to see them live.'”

While ‘Life on Other Planets’ is as pure Moon Hooch as it gets, it was not the album the group set out to record. When they initially headed into the studio in Winooski, VT, the band planned on creating a heavily produced and composed collection more along the lines of their previous full-length album, ‘Red Sky.’ Instead, they found themselves drawn to something more raw and immediate, recording everything live over the course of a week. The band had such a deep relationship with the songs that one take was all they needed.

This electricity is immediately apparent on ‘Life on Other Planets.’ Throbbing disco drums meet ear-worm sax riffs on fiery opener “Nonphysical.” Like much of the album to come, the song is hypnotic and immersive, building to grand heights only to dissolve into the ether and reassemble again from nothing in a fit of improvised brilliance. The blistering “This Is Water” practically tears itself apart at the seams with intensity, while the tripped-out “They’re Already Here” swirls like a mesmerizing fog. Some songs, like the shapeshifting “Bronst” and dizzying “#4 Solo,” evolved out of interludes and solos from older tracks that took on new life in the band’s live shows, while others, like “Old Frenchman” and relentless “Candlelight” began in a more traditionally compositional fashion before surrendering to the spirit of improvisation. Even the eerily dreamy ‘Need Your Love,” the sole track with vocals on the album, features lyrics created in the moment.

As Moon Hooch has done since the release of their debut album in 2013, they’ll tour extensively in 2020. The first leg of tour dates in support of ‘Life On Other Planets’ is comprised of 20 U.S. shows blanketing the East Coast through January and February, while a 14-date European run will follow in March and April with stops in Czech Republic, France, Belgium and Switzerland.

Moon Hooch got their start nearly a decade ago busking on the streets of New York City, where they earned a reputation for raucous performances that overflowed with joyful abandon. When their impromptu subway platform sets began turning entire stations into commuter dance parties, the NYPD had to ban them from locations that couldn’t handle the crowds. Within just a few short years, the trio was selling out headline shows around the world and sharing bills with Mike Doughty, They Might Be Giants and Marco Benevento, while performing on television alongside the likes of Tame Impala and James Blake. As the scale of their performances grew, so did the band’s sound: they began fleshing out their live setup with synthesizers, electronic wind instruments, and a “Reverse DJ” setup, which processed the live sound from their horns through Ableton software in order to expand the possible range of sound and textures. NPR praised the group’s 2016 record, ‘Red Sky,’ as “mesmerizing” and “muscular,” while The Guardian hailed it’s infectious techno-fueled dance grooves.”