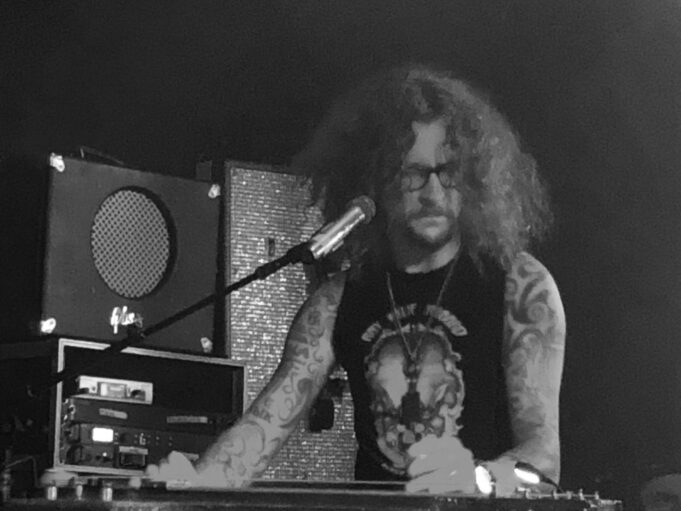 The Cadillac Three are badass Southern rockers from Nashville, Tennessee who describe their sound as “country fuzz.” Jaren Johnston, Kelby Ray and Neil Mason look and convey the part. Yet, at their shows, they also bring an undeniable good time vibe, too, beside the renegade image. Such was the case at their first of two-night stand headlining at the Troubadour on November 1.

It’s clear the songs are also accessible. The material offers up arena/stadium stylized anthems that feature sing-along choruses and impressive instrumental jams. The Cadillac Three have a very devoted, diehard fan base and they were as rowdy and wild as the band and were in a total party mood.

The group delivered non-stop energy where the audience at this capacity performance sang along to every track. Frontman Jared Johnston has a great stage presence and he kept the momentum high belting out strong vocals, sinewy guitar licks and struck a few poses. Johnston is very physical and animated. He moved constantly around the stage. At times it tended to be a bit overdone, over exaggerated; but it also seemed purposeful, dramatic.

Still, the band as a whole is a well-oil machined and play really well. Spontaneity was never sacrificed for perfection. Show highlights included hits such as “American Slang”, “White Lightning”, “I’m Southern”, “The South,” “Bury Me in My Boots,” Long Hair Don’t Care,” “Hank & Jesus” and more.

The Cadillac Three are talented, seasoned musicians with memorable songs. It was a thoroughly entertaining show that completely satisfied and enthralled their fans.