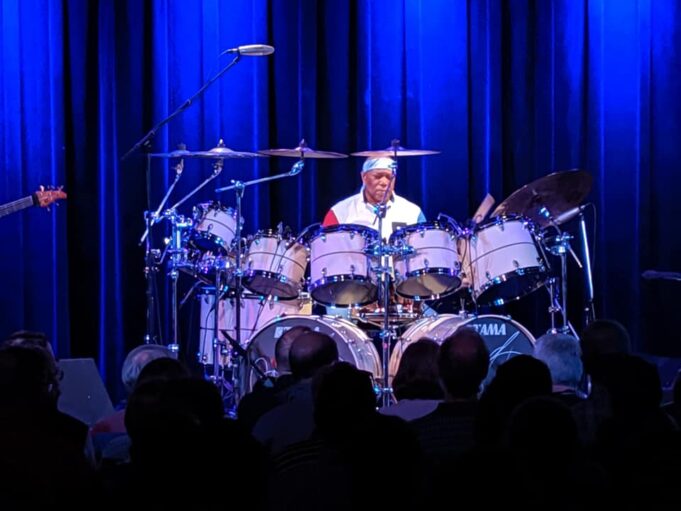 The Center for the Arts in Natick MA hosted the legendary jazz drummer on October 24th. by Jennifer Simon

2019 marks Billy Cobham ́s 75th birthday. To celebrate the occasion the legendary jazz drummer assembled an incredible band called the Crosswinds Project featuring Jazz trumpeter and composer Randy Brecker along with world music guitar virtuoso Fareed Haque. “It’s been an adventure, these seventy four years that I have been blessed to experience so much in my life” Billy says.

The show was a single set of 90 minutes that covered seven songs. The band is a cohesive unit moving adeptly as they are now in their seventh week of this tour. This was the third visit by Cobham to TCAN -and the show sold out (again.) The music is featured on the band’s new album which was developed over the last three years including cuts from past visits to TCAN.

One of the songs from the band’s album, “Spanish Moss” featured keyboardist Oz Ezzeldin in an extended solo. “Under the Baobob Tree featured five minutes of sublime guitar by Fareed Haque.

After the show Billy signed autographs and chatted with fans.

Billy Cobham came to prominence in the late 1960s and early 1970s with trumpeter Miles Davis and then with the Mahavishnu Orchestra. According to Allmusic’s reviewer, Cobham is “generally acclaimed as fusion’s greatest drummer”. He was inducted into the Modern Drummer Hall of Fame in 1987 and the Classic Drummer Hall of Fame in 2013.

Cobham’s influence stretched far beyond jazz: prog contemporaries Bill Bruford of King Crimson listened closely to what he was up to, younger drummers like Danny Carey of tool learned from him, and even prince played a version of Cobham’s “stratus” in concert. There’s maybe no bigger fan than Phil Collins, who has named Mahavishnu’s The Inner Mounting Flame as a key influence on his early style. “Billy Cobham played some of the finest drumming I’ve ever heard on that record,” he said.

Jazz trumpeter and composer Randy Brecker helped shape the sound of jazz, R&B and rock for more than four decades. A founding member of Blood, Sweat & Tears, his trumpet and flugelhorn performances have graced hundreds of albums by a wide range of artists from James Taylor, Bruce Springsteen and Parliament/Funkadelic to Frank Sinatra, Steely Dan, Jaco Pastorius and Frank Zappa. Randy’s signature trumpet solo on the track Flash Flood was an exciting highlight of Billy Cobham’s Crosswinds album.