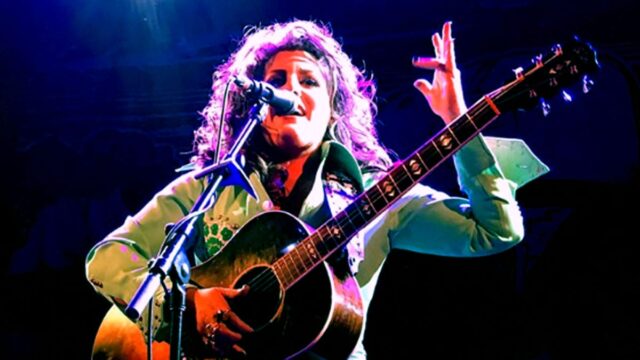 November 01 2019 the Tourbadour in Los Angeles by Harriet Kaplan

Hannah Dasher looks like Dolly Parton with the big, teased hair, an exploding bust line, a voluptuous figure and curves all poured into a retro two-piece polyester pantsuit replete with rhinestone accents. Dasher even sings like the famous Tennessee multi-instrumentalist and songwriter but she manages to make a strong impression setting herself apart with own style with influences that also include Aretha Franklin to Eric Church and Tom Petty.

Opening for Cadillac Three at the Troubadour in Los Angeles, CA on November 1, she addressed the Parton comparisons with humor and aplomb. She also sang “9 to 5” that, of course, got a great and enthusiastic response with the ensuing, requisite gleeful sing along from the audience.

Staking a claim she is an original artist in her own right as well, Dasher held the crowd in the palm of her hand with a ballsy attitude full of swagger and confidence. The Georgia native had a very natural, real and direct rapport with the audience. She made conversation with them easily. It was sort of a give and take exchange back forth where the singer and current/new fans were getting to know each other. Both were vibing on the same level that was both sassy, salty and bodacious.

Although, she has only released a few songs at a time, a full-length album debut album, Heavy, is in the way and in the works with Jaren Johnson, the frontman of the Cadillac Three.  A number of those songs she sang and played a mean lead guitar on live shredding on “killer” hook-driven numbers like “Drinkin’ Out Loud,” “1990’s Heartbreak,” “Stoned Age,” and “I’m Gonna Whoop Your Redneck Ass” and more.

Hannah Dasher not only composes her own material but she also is writing for Sony/ATV Nashville and Two Black Dogs Publishing, a new company formed by Jaren Johnston. The prolific artist celebrated her first songwriting cut, “Go To Bed Early” on Brad Paisley’s new Love and War album on which she also contributed on background vocals.

Hit us at lmnandr@gmail.com to submit your review or story.

Check out the LMNR facebook page for show announcements, photos and more!