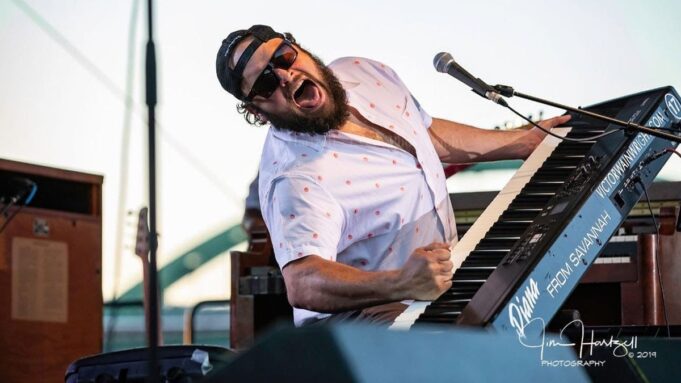 Wainwright’s upcoming album, “Memphis Loud,” is due out on Ruf Records this coming March.  “We’ve assembled the same exact top-notch team as our last record. It will be all original music,” says Wainwright.

The Nashville musician took home the Pinetop Perkins Piano Player Award at the 2018 Blues Music Awards in Memphis last May. The blues musician’s virtual non-stop touring schedule includes a headlining slot at the famed three-day Big Blues Bender in Las Vegas, where he is confirmed to perform again this September. Rock & Blues Muse voted Victor Wainwright & The Train one of its “Top 20 Blues, Rock & Roots Albums of 2018” while Wainwright’s album finished #1 on the respected Roots Music Report Top Contemporary Blues Album Chart for 2018.

It had to be a Train. The name of Victor Wainwright’s new band – and the sleeve image of their debut album – is also the most fitting of metaphors. In music folklore, the train might have associations with the freight-hopping bluesmen of yore, but with this restless boogie-woogie innovator stoking the furnace, this latest project is a charging locomotive – surging forward, crashing through boundaries of genre, sweeping up fresh sounds and clattering headlong past the doubters.

As the man himself hollers in the ivory-pounding title track: “If you wanna boogie get aboard this train/Get yourself a ticket or get out of the way…” At a sweet-spot in his career, where most established stars would rest on their laurels, Victor Wainwright & The Train instead rips up all that has gone before. The twelve tracks are originals in every sense, written by Wainwright, pricking up ears in a sterile music industry and stretching the concept of roots in bold directions.

“I wanted to write this new music mostly on my own,” Wainwright explains, “as it was coming and speaking to me. I believe that for roots music to grow, and reach out to new audiences, we have to push it forward.” The result is an album that walks a tightrope between scholarly respect and anarchic irreverence. You’ll hear Wainwright twist boogie-woogie tradition on barrelhouse thrillers like “Healing” and “Boogie Depression,” both driven by his visceral piano style. But you’ll also hear him fearlessly explore the gamut of genre, from the Latin flavours and New Orleans horns of “Wiltshire Grave,” to the mellow near-psychedelia of “Sunshine.” It’s a musical cocktail served up by Wainwright’s inimitable gravel-flecked vocal.

His words can be hilarious, as on “I’ll Start Tomorrow,” on which he postpones his doctor’s clean-living advice. But they can also be heartfelt, on the gospel-tinged kiss-off of “That’s Love To Me.”

“I’ve tried to write songs that remind us to love ourselves,” explains Wainwright. “It doesn’t matter who voted for who, what your religion is, who you love…” On this white-knuckle ride, only The Train could keep the material on the tracks. “I ended up with a hit-squad of downright amazing musicians that shared my curiosity for all corners of the roots genre. We wanted to capture how we feel performing, right smack-dab on this record, and I believe we’ve done that. Now I just try to keep up.”

In truth, Wainwright has always been an artist that sets the pace. Born into a musical family in Savannah, Georgia, the formative influence of his father’s vocals and grandfather’s rolling boogie-woogie piano compelled him into a life of music. By 2005, he’d announced his talent with solo debut, Piana’ From Savannah, while his central role in Southern Hospitality and partnership with Stephen Dees in WildRoots has seen him ignite stages and stereos for over a decade. Among his numerous accolades: In 2013 and 2014, Wainwright won the ‘Pinetop Perkins Piano Player of the Year’ at the Blues Music Awards. Also in 2013, his collaborative album, Easy Livin,’ made the Top 10 in the U.S. Billboard Top Blues Album Chart.

“Looking back on your career is a tough thing to do,” he says. “Challenges are many, and frequent, but when you get it together, it can also be extremely rewarding.” A man of many talents, Wainwright is a composer, producer, vocalist, piano player, and award-winning entertainer. A long-standing leader of the boogie-woogie pack, he could refer you to his BMA and Blues Blast trophies, or a catalog that has repeatedly hijacked the Billboard Top 10. But rather than dine out on past glories, this questing artist would rather you joined him for the ride ahead. “Of course, I still have songs on this album that are just about kicking ass and taking names, like The Train,” he laughs. “But if you listen to the lyrics, what I’m really saying is, we got to get on the train and move forward together.”