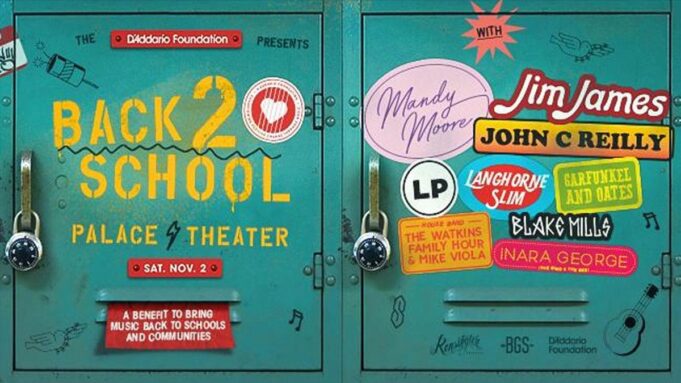 The historical Palace Theater in Los Angeles, CA was the site of the D’Addario Foundation’s Back 2 School Class of 2019 benefit on November 2. The organization is considered longtime champions for accessible music instruction. As a 50103 non profit, the money that was raised by the D’Addario Foundation at this benefit will provide kids access to music programs, provide college assistance scholarships, and encourage more females to pick up guitars and rock out through D’Addario’s Girls In Music Initiative.

Speaking of rocking out, that’s just what the eclectic array of musical guests did and one comedy act had the audience cracking up and in stitches. The Back 2 School benefit included the house band The Watkins Family Hour, Mike Viola, Jim James of My Morning Jacket, Mandy Moore, John C. Reilly, LP, Langhorne Slim, Garfunkel & Oates, Blake Mills and Mike Garza. The almost two-hour show featured original music and songs that had to do with education and school. The Saved By The Bell theme, Jack White’s I Can Tell That We Are Going To Be Friends, Stevie Wonder’s I Wish, Chuck Berry’s School Days, and Alice Cooper’s Schools Out were among the many educationally themed songs that were performed. All artists seemed to be having a good time and enjoying themselves. It was clear they loved playing and it was on behalf of a great and essential cause.

John Christopher Reilly is an American actor, comedian, singer, voice actor, screenwriter, and producer who made his film debut in Brian De Palma’s war film Casualties of War. Reilly gained exposure through his supporting roles in Days of Thunder, What’s Eating Gilbert Grape, and The River Wild and gained widespread fame for his roles in Boogie Nights, Step Brothers, and his voicing of Wreck it Ralph. His unique and funky rendition of the Stevie Wonder “I Wish” was different as he played spoons on his knees in time to the rhythm.

David Garza totally captured the energy and enthusiasm of School Days with an animated and rousing performance playing guitar behind his back. Garfunkel and Oates amused and shocked with a funny sexually explicit/descriptive song about sex education.

There was also a synchronized drum line that impressed the crowd with their syncopated skills. The show ended with an upbeat finale of Fleetwood Mac’s “Don’t Stop Thinking about Tomorrow” in which all the acts came back onstage together to sing.

On a more serious note, Suzanne D’Addario of the D’Addario Foundation spoke about the work the organization. D’Addario discussed the over 100-year history of the foundation and how it helps children and a video was shown during the benefit to illustrate her points made and the organization’s significant accomplishments and ongoing efforts to continue that work given the challenges that are always there in the face of ongoing budget cuts and school programs being eliminated which is result of those dire circumstances.

Langhorne Slim told a funny and delightful if rambling and disjointed story about his problems in school and talked about being placed in classes in which he didn’t fit. He seemed to revel in the fact that people are different and one box doesn’t fit all; it’s cool to be an outcast, freak or a weirdo especially in a system that rewards uniformity. The D’Addario Foundation’s Back To School 2 benefit honors education but prizes and understands that being creative is important, too: to engage one’s intellect is to spark fire to the imagination and touch the soul of a human being.

Mandy Moore is a singer and actress known for her ’90s pop albums, films such as ‘A Walk to Remember’ and her starring role in the TV hit ‘This Is Us.” She came out and the crowd loved her performance of the song “Seventeen.” Moore leads an all-star cast in the gripping trailer for the WWII drama Midway that opened this weekend.

The D’Addario Foundation’s Back To School 2 Benefit was a successful event drawing serious attention to the already pressing and urgent need for access to music education, programs and instruments in the classrooms and its creative and intellectural benefits for children.

Check out the full gallery of photos from this show here. Photos by Elli Lauren Photography

Hit us at [email protected] to send us your stories and reviews.