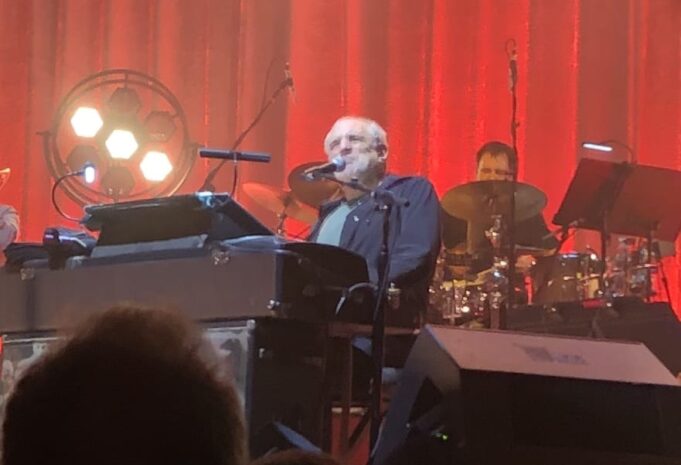 Steely Dan — Donald Fagen and a crack 13-piece band — played their album Gaucho cut for cut plus a treasure trove of greatest hits and deep cuts during the third night of a five-night residency at the Orpheum in Boston Oct 29.

Each night of the five featured a different album, followed by a variety of songs culled from their other albums. Gaucho, released in 1980, was their seventh and final studio album prior to the band’s “retirement.”  They did not record another one until 2000.

I’m not much for classic rock shows, usually because I’ve seen the band before or I’ve heard the songs enough for a lifetime. I went to this show because I’d never seen Steely Dan and because a friend had an extra ticket.

In truth, I don’t really consider Steely Dan a rock band as much as a jazz-rock fusion band. And Steely Dan was not really a band since, for most of its lifetime, it was Fagen and partner Walter Becker and a slew of studio musicians recording and performing Fagen-Becker compositions.

Still, the musicians that are playing with Fagen on this tour do seem like a band, and a pretty tight one at that, with four horns and three female backup singers. While Fagen doesn’t allow them to stretch much, the band certainly plays like a well-oiled, if predictable, machine.

Fagen and the band soared through Gaucho, one of Steely Dan’s least jazz-oriented albums. Instead, it goes for grooves and atmosphere rather than complex jazz chords and changes.

Fagen came out without introduction, wearing an old hoodie, and sat down at his piano and broke right into “Babylon Sisters,” followed by “Hey Nineteen,” two of the album’s most popular songs and ones that the crowd received enthusiastically.

He was energetic and in a seemingly good mood, smiling and bobbing his head up and down, looking a lot like Ray Charles. In fact, Charles surely was a huge influence on Fagen, judging  not only by his musical style, but also his facial expressions and movements. His backup singers are even called the Danettes.

Not on hand for the show, of course, was Becker, who died in 2017. While his voice was not missed — he didn’t really sing — and his playing was replicated, even surpassed, by two lead guitarists, his not being there still seemed odd. His spirit certainly seemed to be around, though. There was a microphone left unattended where Becker might have stood.

Towards the end of the show, Fagen thanked “my partner Walter Becker who couldn’t be here tonight.”

The show actually picked up steam following the seven Gaucho songs, as Fagen declared: “How are we going to fill out the rest of the show? We’re just going to play some random shit.”

That the band even tackled Gaucho was interesting as the album was one of Steely Dan’s most troublesome, taking two years and 46 session musicians to complete.

The greatest hits part of the show kicked off with “Sign In Stranger,” from the Royal Scam album, and went though a host of classics, including “Black Friday from Katy Lied, “Aja” from Aja and on and on.

The crowd responded most enthusiastically to these songs as well as other earlier hits such as “Rickki Don’t Lose That Number,” from 1974’s Pretzel Logic. and “My Old School” from 1973’s Countdown to Ecstasy.

“That was a profound gas,” Fagen declared after finishing that song. The not-quite-sold-out crowd agreed with a standing ovation.

The Pat Bianchi Trio opened the show with a half-hour set of jazz.

From the Pittsburgh show earlier this month:

Michael Lasalandra is a music fan and an artist who paints portraits of musicians, among other subjects. His work can be seen at mlasalandra.com.