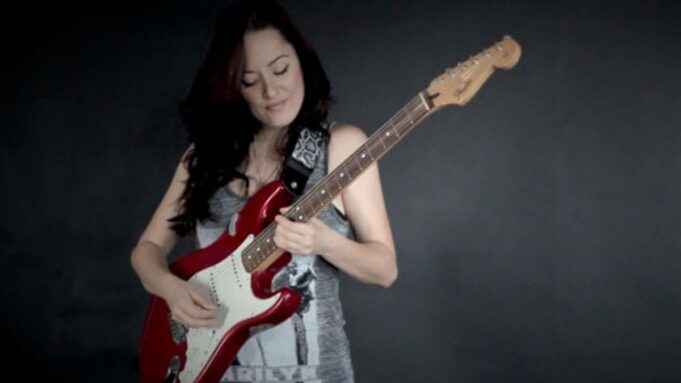 Rising blues artist Diana Rein brings her “Queen Of My Castle” Tour (named for her new album) to Orange County with a performance at Ziings Bistro & Bar and announces tour dates in CA, FL and SC.

Rein, the first female artist signed to musician Mike Zito’s new Gulf Coast Records label, is currently performing on the Legendary Rhythm & Blues Cruise (October 26 through November 2) in the Mexican Riviera. Prior to that, the guitarist-vocalist was part of the Gulf Coast Records Fest (along with other artists on the label) who performed at the renowned live music venue Knuckleheads in Kansas City, MO earlier this month.

Diana celebrated the release of Queen Of My Castle with a sold-out concert at The Historic Merc in Temecula, CA this past August. “From the soulful, toe-tapping “Yes I Sing The Blues” to the hard-rocking, “Heat,” Rein showed a versatile voice and sharper-than-sharp songwriting skills with some meaty guitar lics thrown in for good measure,” writes the Valley News in their review of her show.  This past July Rein performed in front of thousands of music lovers at the Open Air Blues Festival in Romania, where she was born.

Queen Of My Castle, the follow-up to Rein’s critically-acclaimed 2016 album Long Road, was released this past June. The fifteen-song disc is co-produced by Michael Leasure (drummer for the Walter Trout Band) and is mixed by Lincoln Clapp, who previously mixed Texas Flood by the late, great Stevie Ray Vaughan, one of Diana’s biggest influences.

There’s nothing traditional about Blues artist Diana Rein. Diana’s parents escaped communist Romania in 1981 when she was three years old. They arrived in Chicago with only fifty dollars in their pocket and a dream for a better life. Diana brought her family’s strong Romanian work ethic to performing arts school, where her talents flourished, eventually leading her to a role in the classic American 90’s comedy “Home Alone.”

Diana’s love of the Blues started at age eight, when her parents brought her to a Chicago Blues Club, arranging to have her perform some songs with the band. This was a defining moment. A blues artist was born. Over the years, Diana’s music heroes and influences emerged: SRV, Prince, and Phillip Sayce to name a few. But it all started back in Chicago, the home of amazing Blues legends like Buddy Guy.

Diana followed her heart to California, where it would be broken repeatedly and made stronger each time. With experience came strength, self-reliance and plenty of songwriting material. At one point when hope was slipping away, Rein promised to make music her life’s work,  grabbing the reins (no pun intended) on her songwriting and guitar playing. Music never stopped knocking and Diana is glad she finally swung the door wide open and let it in. So are her fans. Today Diana calls Southern California home, where she continues to release original music and play what feels good for anyone who will listen. Her promise to her fans is that she will never stop making music and growing as an artist.

“When you want something so bad it feels like a curse…Heading down a narrow path. Don’t let them make you feel small and question your Worth.” ~ lyrics from the song “Worth” off Diana’s new album “Queen of My Castle.”

Drop us a line at [email protected] with your story ideas and show reviews.