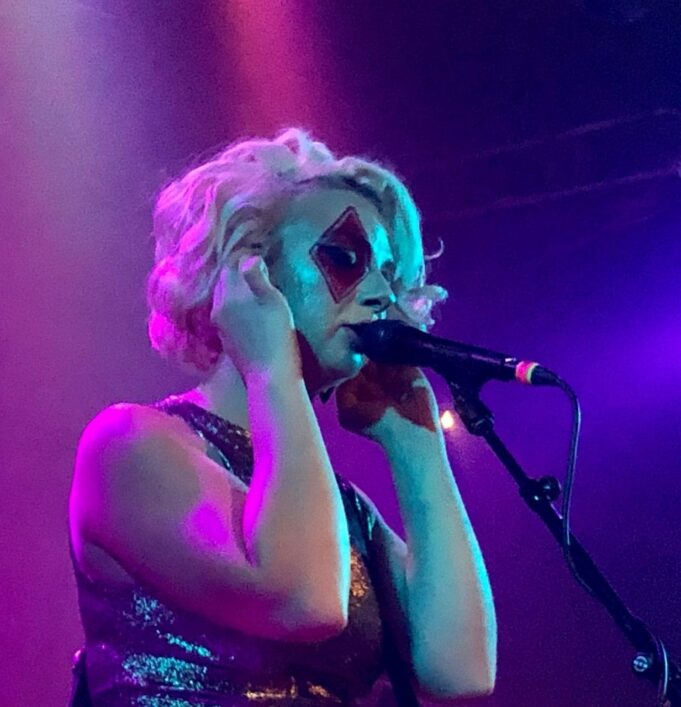 With her blonde, mid-length curly hair and what looked a Harley Quinn inspired face paint around one eye, Fish was adventurously dressed in a 1960’s styled gold lame mini dress and black thigh high boots.

Fish owned the stage and held court at this sold-out show with an audience of her devoted and very enthusiastic fan base. She possesses a confidence air, swagger and magnetic charisma that make her an exciting artist visually. But it’s Fish’s undeniable musical chops that make the listener really take notice and as well the songs she writes.

Her guitar playing is masterful. The solos are exciting, melodic, soaring and highly charged. Samantha Fish can really shred on guitar! She can go from electric to acoustic with apparent ease. Fish’s vocal style is a combination of breathiness, femininity with a bluesy, snarl-accented growl.

Promoting her latest album, Kill Or Be Kind, Fish’s sixth solo LP, the tracks have a soulful rhythm and blues quality to them. Among them Fish performed at The Troubadour was “Bulletproof,” which she played on a vintage and distinctive looking cigar box guitar. “Bulletproof,” has a country flavor mixed with a Black Keys vibe.

Among the originals Fish played she slipped in a cover of “Crow Jane Blues” by Julius Daniels. An American Piedmont blues musician, Daniels almost lived to be forty six years old and passed in 1947.

The material Fish wrote and played live felt very real and seems to come from an honest place. Though, not every song was great, or was able to wow me, a majority of the numbers she played were really good. She was supported by a really exceptional band that kicked ass and filled out the overall blues/rock soundscape. Samantha Fish thrilled the audience at The Troubadour with a knock-out performance.

This is a video not from this very show, but a recent show with Samantha Fish: