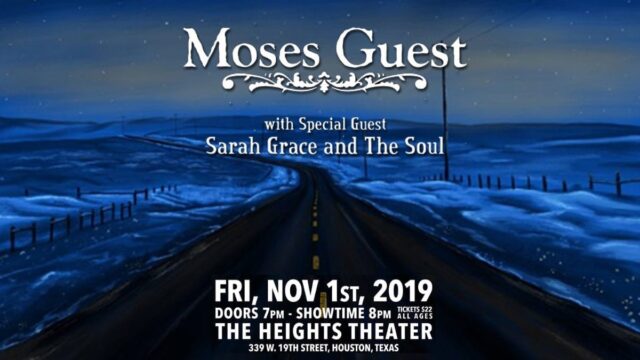 It will be the first hometown show for the band in almost a year.

On Friday, November 1st, Houston-based southern rock band Moses Guest will headline a performance at the iconic Heights Theater in Houston. Wunderkind Sarah Grace and her band the Soul will be their special guests. Tickets are $22 and can be purchased at this link. RSVP to the Facebook event here.

After years of an on again off again presence of Texas’ favorite rock and jam band, Moses Guest returns with a new single “All Night Brother.” The song is being released in conjunction with the Home Grown Music Network who have long partnered with the band in order to spread the word to the faithful around the world.

The band is a celebration of what can happen when high quality song writing is adopted with faith by excellent musicians who share the vision of the song writer. Their ability to jam does not make the the song’s purpose subservient, rather is a compliment to the marriage of words and music in time.

ABOUT SARAH GRACE & THE SOUL

Sarah Grace is a 16 year old indie/roots singer and musical powerhouse from Houston, Texas. She is best known as a semi-finalist from season 15 of The Voice. Sarah Grace’s powerful performance of “Amazing Grace” on The Voice, can be described as her signature moment, establishing her as a legitimate artist. Offstage, Sarah Grace attends the prestigious High School for the Performing and Visual Arts as a trumpet major and she performs in their orchestra, jazz and concert band ensembles.

Built in the 1920’s, the iconic Heights Theater was renovated and reopened in 2016 as a live music venue, bringing the best musical talent through Houston.

Moses Guest have clearly not hung up their cleats. But their appearances are much less frequent than the days when they toured all over the west in broken down jalopy vans. But the band’s penchant for writing and performing together has clearly not been completely slaked, and November 1 will allow for an evening of appreciation between the band and their loyal fans.

“All Night Brother” is available for purchase here.