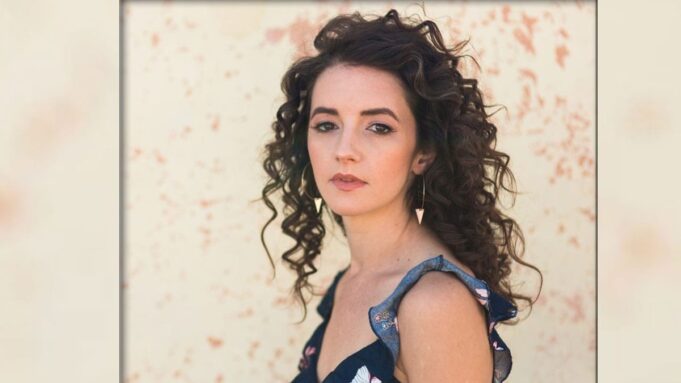 Michaela Anne is known for blending elements of classic county, pop, indie rock and honky tonk into her own hybrid sound. The singer/songwriter has released two albums, “Ease on My Mind” and “Bright Lights and Fame.” Now, Anne has a new third LP out, “Desert Dove.” This LP shows the artist with a penchant for vivid, sparse and straightforward storytelling is also charting new stylistic territory and sharing more of her life and personal experiences touching on themes of gender, desire, power, submission and desire.

All this is powered by her sublime and pristine vocal delivery. Recently, Live News and Reviews did an email interview with Michaela Anne on the eve of her tour stop in Los Angeles, CA on October 25. Anne will open at the Pico Union Project for Joe Pug, a folk and Americana-based singer/songwriter. The interview touched the making of the Desert Dove and why it was recorded in San Clemente, CA. Also, Anne spoke at length about reevaluating her career, life and touring. The artist also discussed the positive label support she has received while recording Desert Dove on Yep Roc Records that fostered a nurturing space for her creativity and vision.

What was the inspiration for Desert Dove or what inspired you to write the new album?

The inspiration for these songs is a lot of self-reflection, examination of the duality of our human experiences, how nothing is as easily classified as we might think and peeling back layers of relationships with each other and to ourselves. It’s a lot of exposed heartache as well searching questions.

Was the songwriting process and arrangement different this time around?

Not really. I have a few different writing processes whether I’m writing alone or with others which were all present on this record. I definitely wrote intentionally for this record and wrote more than we would use to try and get the right collection of songs. I think the musical arrangements are different compared to my previous records because we explored a little more sonically versus using the band arrangement that I would play live. We built the song arrangements in the studio vs working them up with a band first.

How did you come to assemble such a strong and seasoned array of musicians to participate on the album?

Well first of all, it was really fun. A lot of these musicians I’ve known and respected awhile but others I was meeting for the first time. The majority of musicians I hadn’t ever worked with before and that was an exciting aspect for me. I wanted to work with a group of people who were fresh to me and my music and not coming in with their own subconscious biases or ideas about what type of music I would be making.

Did you get a lot of input from the musicians? Did they get to improvise on their parts?

Everything was arranged on the spot so nothing was pre-written. Kristin Weber did come in with some string arrangement ideas she had already been working on for “Tattered, Torn and Blue” but the rest of it she created with (co-producer) Kelly Winrich on the spot. That’s some of the most exciting work to witness and be part of.

Can you talk more about reevaluating your career and life because of touring, living in Nashville, label and publicity problems that lead to the making of Desert Dove?

Well this career path is an interesting one. There’s a lot of financial risk and instability. Not to mention just the mental impact of our societal and cultural idea that “making it” as a musician is near impossible and not a “real job.” So I’ve basically been evaluating my career and life and asking myself if I’m all in. Regardless of the loss, sacrifice, struggle, is this what I am doing for my life’s work? This record was basically me putting it all on the line, investing in myself financially and emotionally and saying this is it, for better or worse, whether I “fail” or “succeed,” this is what I’m doing.

How did you pick San Clemente, CA versus any other place?

Kelly Winrich, who co-produced the record, is from there. Sam Outlaw (the other co-producer) brought him into the project and when Kelly said we could either record at his studio in NYC or at his family’s home studio in San Clemente, it was a no brainer for me. I had never recorded in California, and the idea of making music while living on the beach for 3 weeks was something I wouldn’t pass up.

What prompted you to expand your sound on the latest album and why?

I wanted to be more reflective of what I hear in my head. I felt like my last record somewhat pigeonholed me in this “throwback country” sound which feels like just one part of me but not all of me. I wanted to incorporate sounds and feelings of music that I spend my time listening to. Thus began my attempt to make a record that embraced my love of Shania Twain and the Dixie Chicks, but could also include the sonic influences I love from War On Drugs or Rayland Baxter.

How did you come to record on Yep Roc Records? Do you find those at the label are supportive and nurturing of your creativity and vision?

My manager has worked with them for a long time on other projects, so he’s the one who made the introduction and luckily they liked the record. I have found everyone at the label to be incredibly supportive and nurturing for my creativity and vision. I haven’t experienced any pushback or resistance to my ideas or decisions. It really feels like an artist centric and supported label, so I’m really grateful to be part of their roster.

What goes through your mind being compared to Linda Ronstadt and Emmylou Harris? How does that make you feel?

I draw a lot of inspiration from both. They’re both in my top 5 favorite singers as far as their natural talent as singers and performers, but as well as their repertoire, career integrity, longevity, style… I love both of them so much. I honestly try not to internalize any comparisons. I heard the saying once that if you believe what people say about you then you have to believe both the negative and positive. I’m really sensitive so I have to almost have a bit of a shield around myself even for the positive stuff. But obviously… it’s humbling. I’m happy people are listening and can hear their influence.

What can your fans expect at your show at the Pico Union Project?

Well I will be solo for this performance so it will be a vocal-centered performance. I love performing solo because I also get a little more opportunity to share stories and connect with an audience through that.

How does it feel to be touring again? What is different this time around?

It feels really great! I was just on the road for a couple weeks with a full band and that was so fun. It’s the first time I’ve had a keys/synth player and she’s rad and really helps create the right vibe. When it’s the full band, we also have a Desert Dove inspired stage set with cactus and salt rock lamps and it really helps set the tone from the start each night.

What’s next for Michaela Anne?

TOUR! Lots of touring. And I will definitely be carving out time to write and maybe even get to release some new songs within the year.

Drop us a line at [email protected] with your review or story submission.

Check out the LMNR facebook page for announcements, photos and more!