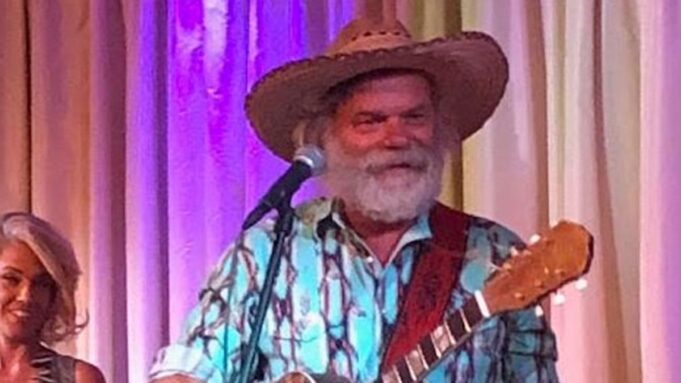 Canadian singer-songwriter Fred Eaglesmith put on a rollicking show for a nearly sold-out house of Fredheads at the Bull Run in Shirley (MA) Sunday.

It was my first time seeing him and I was only familiar with a few of his tunes, but it didn’t matter. I liked them all. Eaglesmith is considered alternative country or maybe Americana (even though he is Canadian!) and has been on the road doing his thing since 1980. He still has the enthusiasm of a young man, however. He certainly did not phone it in for his devoted fans.

His songs are often quirky, as he writes about oddball characters, trains, country life, and the perils of fame and fortune. He isn’t much of a singer, nor a great guitar player but thanks to his wife, Tif Ginn, that didn’t matter. Her perfect harmonies blended nicely with his voice and its limited range. She is also a multi-instrumentalist and played electric guitar, electric mandolin, accordion, sax and drums. As a result, there were quite a few rockers in the set even though he was without his band.

Eaglesmith, 62, loves to talk and tell jokes and is nearly as much of a comedian as he is a musician. His observations on the local area had people laughing hard, such as when his bus recently broke down in Northampton and he was surprised to find a garage amid all the “latte shops.”

He reminded me a little of John Prine and a lot of Robert Earl Keen. His songs I Like Trains (about how he likes trains!) and Alcohol and Pills, about how fame and fortune have taken down so many of the great musicians, naming Hank Williams, Janis Joplin, Gram Parsons and Jimi Hendrix specifically in the lyrics, were among the most enjoyable. One is kinda funny, the other is quite sad. He goes back and forth with the emotions. I guess his love of trains stems from his running away from his strict religious home at age 16 and riding the rails across Canada, embarking on a career at age 18.

Most of his songs are pretty catchy and well crafted and executed. It is a shame he isn’t a bigger name, but that’s how it is sometimes when you are out of the mainstream. He certainly doesn’t seem to lament his cult status.

Some songs were introspective such as Dangerous (I’m dangerous…..to myself) and made for a nice counterbalance to the lighter tunes.

I can’t say enough about his relatively new wife, Tif Ginn (she appears to be about half his age), who is from Texas and has a voice that can’t be forgotten. She did sing one song on her own.

After the show and encore, the couple hung out at the merch table signing CDs and taking pictures with fans. They couldn’t have been more gracious. I told Fred that I thought he and Keen were like two peas in a pod, and he agreed. “He’s a good friend of mine,” he said.