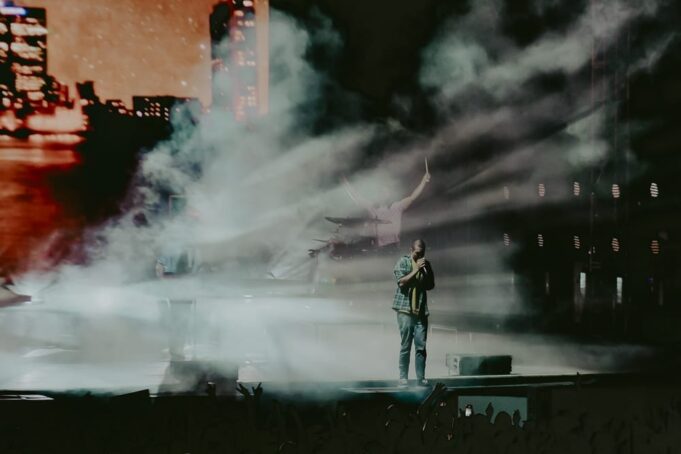 Doom Days Tour by Bastille performed at the beautiful Greek Theater in Berkeley
on Friday, October 11th by Justine Willard

They started their energetic hour and a half set with “Quarter Past Midnight,” the first single released from their 2019 Doom Days album. During the song “Two Evils,” lead singer Dan Smith sat on a rolling safety ladder. The ladder was in front of a backdrop of a red moon and a window with a city view.

Before they started “Bad Decisions,” Will Farquarson, their bass player, told the crowd how, when they were filming the music video for the song, he was talking to Dan for four hours and didn’t recognize him because he was in costume!

Justine took amazing photos at this show, check out the full gallery of photos here.

Then, things took an exciting turn at the concert when a fan in the front row gave keyboard player Kyle Simmons high heeled leopard print heels with goldfish in the heels. He even put them on to see how they would look on him.

Bastille broke their show into three acts; Act One was called “Still Avoiding Tomorrow.” To end the first act, they performed “Flaws,” the first song they created together and the reason the band is where they are today. During the song, Dan got off stage and walked through a giant crowd of fans in the pit while taking selfies, hugging, and high fiving fans.

Act Two was titled “Those Nights,” which appropriately began with the song “Those Nights.” During the song, Dan was lying down on a spinning couch with the words Doom Days written on the back of it. The band interacted well with their audience. During “4 AM,” the crowd was shining their phone lights while Dan was sitting on the edge of the stage singing. While performing “Doom Days,” everyone was moved by the song’s meaning but continued to sing along.

Act Three, “The Morning Doesn’t Reach Us,” began with the song “Joy.” After that drummer, Chris Wood took a moment so everyone could sing happy birthday to his wife, who was in the audience. They also played “Of the Night,” a song from their very first mixed tape. During the song, Dan requested that everyone get low to the ground and then started jumping up and down.

During the second to last song “Million Pieces,” Dan asked the crowd to sing along to the chorus and wanted to hear everyone’s beautiful American accents.

The last song of Act Three was “Blame,” the third single from their 2016
album Wild World. Unfortunately, like all great nights, the show had to come to an end. Since the band was too lazy to go back to their dressing room and return to the stage because of how far away it was, they just stayed on stage. They performed their biggest hit to date “Pompeii.” Not a single person in the crowd was not singing along, and they had their opening act Joywave join them on stage.

Bastille has been around for a while now, but they still know how to put on a great show. Throughout the night, everyone was dancing, singing, and having fun. I recommend that everyone see Bastille at least once in their life. You still have time to enjoy the band because they will be touring throughout the United States until early November and then in Europe in early 2020.

Justine took amazing photos at this show, check out the full gallery of photos here.