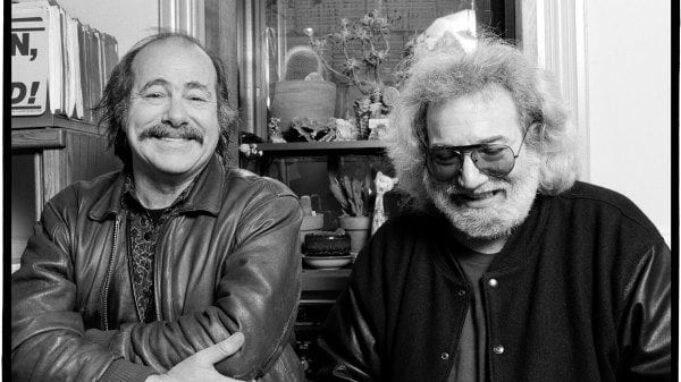 No other lyricist, perhaps in the history or rock and roll has had a greater impact on fans than Robert Hunter. No matter where you go you can see t-shirts with his lyrics, and the impact culturally of his words is profound.

“It is with great sadness we confirm our beloved Robert passed away yesterday night,” Hunter’s family announced in a statement. “He died peacefully at home in his bed, surrounded by love. His wife Maureen was by his side holding his hand. For his fans that have loved and supported him all these years, take comfort in knowing that his words are all around us, and in that way his is never truly gone. In this time of grief please celebrate him the way you all know how, by being together and listening to the music. Let there be songs to fill the air.”

The extended Grateful Dead family is still mourning the loss of the Dead’s other primary lyricist John Perry Barlow.

No cause of death has been provided.

He has worked with the Grateful Dead, Bob Dylan, Lil Feat, Bruce Hornsby, David Nelson, and is cherished. The Dead considered him as important to the band as the performing members were.

After his collaboration with the Grateful Dead Hunter published books of poetry and was working on a novel. Night Cadre is one of his more popular books of poetry.

in 2013, he received the Lifetime Achievement Award from the Americana Music Association.

In 2015, Hunter and Garcia were inducted into the Songwriter’s Hall of Fame.[15] Hunter accepted the award along with Garcia’s daughter, Trixie Garcia, accepting on behalf of her father.

Robert Hunter met Jerry Garcia in Palo Alto and began one of the most fruitful partnerships in rock and roll history. The combination of his lyrics and Garcia’s licks proved to be a mind altering experience for fans.

Phil Lesh, “I am heartbroken. Last night we lost Robert Hunter. As much as anyone, he defined in his words what it meant to be the Grateful Dead. His lyrics, ranging from old border ballads to urban legend, western narratives and beyond, brought into sharp focus what was implicit in our music. A case in point is “Box of Rain” – he heard so deeply what my feelings were when I composed the music, feelings I didn’t know I had until I read his lyrics. The lyrics he wrote for Jerry likewise tapped into the very essence of Jerry’s heart and soul – drawing forth the music living there. Significantly, the very first lyric Robert wrote for us was “Dark Star”, which became the definitive GD exploratory vehicle.
So fare thee well, rh, when my time comes I’ll be looking for you and Jer out there in the transitive nightfall of diamonds.” Love, Phil

Back in 1992 I was graduating from the University of Oregon and had bathed in all of the Grateful goodness that the west coast had to offer. To my luck and astonishment, the Grateful Dead shortly after my summer session graduation announced the Third Decadenal Field Trip. This was their third pilgrimage to Oregon Country Fair site in Veneta, Oregon which is right outside of Eugene on the very same weekend three different decades apart. The 1972 show is historic and I just knew that I had to go. My brother was coming out for graduation and we snatched up tickets for us and all of our friends.

To my further luck and astonishment, Garcia got sick and they canceled these historic shows. Quickly a few different folks put together events on just a few days notice and this was how I found myself standing in front of the stage that was erected at Ken Kesey’s farm outside of Eugene as Robert Hunter was singing a few songs. Even in 1992 he was not a young man, and it was just him and his guitar playing in front of probably eight hundred people who adored him and who had felt the deep effect that his lyrics had brought upon an entire sub culture. While he was singing Ripple, he somehow lost control of the lyrics. Without missing a beat, the entirety of the audience picked it up for him and together we all sang out the rest of the song. While this might have embarrassed some performers, Hunter was elated at the communal effort and effect.

I think that nothing could exemplify the man, his words, and his effect on the world more than that- he may have written the words initially, but together we wrote a story along with him, what happened to those words, what happened to us- it was all thanks to not only Robert Hunter, but also to all of us. We embraced him, he embraced us, and together we fought to change the world.