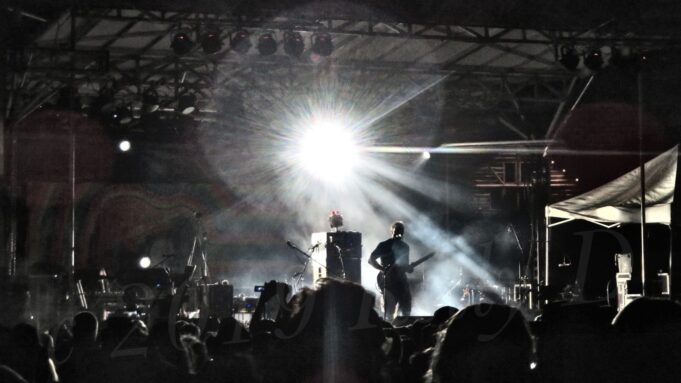 “Redemption” was on Stevie’s and my minds when we decided to check out the Adirondack Independence Music Festival this year. You see, jam-funk-fusion explosion Twiddle was headlining Saturday’s events and my partner and I had had to miss most of their set at StrangeCreek this past May due to a medical emergency. It was a deep regret that we had run out of Camp Keewanee that night, heads pounding, because man, the band was raaaaaging! But it was not meant to be.

And so the summer zipped by and it looked like we would get our chance to actually see Twiddle, and maybe even enjoy them, over Labor Day weekend at a nifty little fest nestled across the street from Lake George. Not only was Twiddle headlining, but Kung Fu, Marco Benevento, Ryan Montbleau and his band, and others would be performing that day. Why not? It was only 2.5 hours away. . .

Off we went, after a beautiful night at our new friends’ compound in southern VT, to Lake George. Due to scheduling, we had to miss the first three acts of the day (if anyone has a review of Midnight North, Deadgrass, and Hartley’s Encore, send us your thoughts at lmnandr @ gmail.com!) but came in at the last few songs of Kung Fu‘s set. Kung Fu is always a great time; my partner Stevie and I had the pleasure of seeing them this year at StrangeCreek in May and at MGM Springfield as part of their free Plaza concert series a few days later in June. Their eclectic blend of rock-acid jazz-funk-whatever is eminently danceable and the quintet clearly has a blast performing it. Beau Sasser, keyboardist extraordinaire, even busted out a keytar for the very end of their performance, suddenly mobile and able to interact with his fellow band members, everyone cracking up all the while.

Lucid, from Plattsburgh NY, came on next. Knowing absolutely nothing about them, I ended up enjoying their set quite a bit. Describing their sound as “Wood Rock,” I noticed most of their band members took turns singing which kept the music even fresher. It was a rollicking combo of blues, rock, and jam and the band even had one of the members’ father come out for a song and freak out on some mouth harp. Hell yeah! It was great to kick off my shoes (literally) and dance in the soft grass in front of the stage.

Then it was time for G. Love and Special Sauce. We enjoyed them from the “food court” area, watching the crowd sway back and forth to their laid-back brand of jammy hip-hop. It’s not exactly my cup of tea but I certainly appreciate its legacy. We took this lull as an opportunity to go stroll around Beach Rd, right by all the steamboats on the lake, and change into my nighttime outfit.

We came back in time for the last 45 minutes of Ryan Montbleau‘s set. We settled down on the grass, listening to Ryan perform a new song that I believe is called “Ships in the Night,” beautifully laying down some cold hard truths about America’s domestic terrorism (read: mass shootings by white supremacists) problem. As he quietly finished the song, he murmured into the mic, with more than a hint of melancholy, “So that’s what’s going on with me. . .” It wasn’t all introspection- far from it. His (what I have dubbed) goofy end-of-set cover was a rendition of Shaggy’s “It Wasn’t Me.” Not surprising that all the millennials in the crowd went nuts.

Marco Benevento and his band were on right before Twiddle. Marco had just played Hawks and Reed in Greenfield MA but I had to miss his concert due to a schedule conflict. I was glad to once again be redeemed and get my chance to see his trippy piano-driven rock. I particularly liked their spacey cover of the Knife’s “Heartbeats,” which turned into a 10-minute long jam with Marco and his bassist thrashing in time. . . Yeah, it was pretty great.

With just a few minutes’ lag time, Twiddle came out onstage. And, as suspected, they crushed it. In an interesting move, it seemed that every time they were setting up for an extended funky jam session, the band would sllllooowwww dooowwwwnnnn into a moody interlude. . . Which made for a great aural experience but definitely threw me off my grooving. However, a highlight of the first set came when G. Love came onstage and the band and the rapper duetted on Sublime’s “What I Got.”

There was a half-hour intermission where a guy with a guitar and loop effects came onto the other stage, then Twiddle came back- and off went the fireworks! Literally! Unbeknownst to Stevie and me, there was a lovely fireworks display shooting off across the street over the lake. At this point, Stevie had informed me his dogs were barkin’ and the weekends’ events had caught up to us, so we decided to depart and watch the fireworks but just within earshot of the fairgrounds. Twiddle’s tunes behind us and the dazzling fireworks in the sky went together like PB&J. We had finally accomplished our pre-summer goal: enjoy Twiddle and believe me, we got more than we ever expected. We left Lake George that night redeemed, indeed.