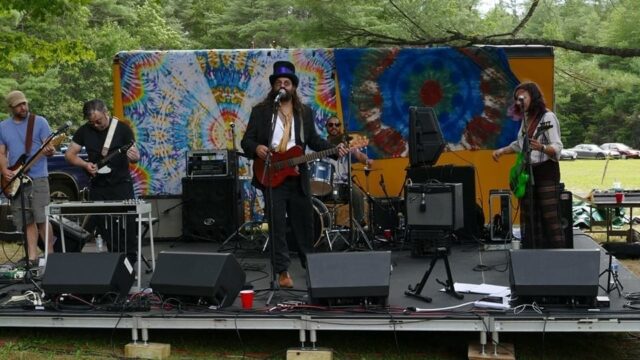 The last day of the new festival in Leyden MA on August 11 2019 and included some of the finest bands in the Pioneer Valley.

After a fun Saturday introduction to Manafestival and a nice nights sleep at home, I returned on Sunday morning to Leyden MA to catch a portion of the Sunday ender of this new festival.

I got there and Noble Hobo, to whom I had been introduced the day prior, were doing the end of a morning set. I only caught one song but their style and mission shone through well.

It’s a little hard to hear as they were mostly acoustic, but check out Noble Hobo:

Up next was an all star band called the Roots All Stars which featured members of the Diamondstones, Terra Funk, The Equalites and more.  The band was anchored by David Boatwright of the Equalites and it is always a treat to see him.  He writes articles for this site, and has the most vast knowledge of reggae music I’ve experience by anyone ever, and his knowledge of non reggae (rock, the blues, punk) is nearly as extensive.  He sang and played guitar on a selection of songs that were well known to reggae experts but less so for regular folks like me who like reggae but whose knowledge may not extend past Marley and Tosh.  B sides and deep cuts from great reggae artists made up the set and the band was a really nice choice for a Sunday early afternoon.

The set included Bob Marley’s “Rainbow Country”, Jimmy Cliff’s “Rub a Dub Partner” plus reggae-ified versions of the Dead / traditional song “Cold Rain and Snow” as well as Dylan / Hendrix’ “All Along the Watchtower” and a couple of other songs.

Up next was rice – an American Band. That day the band consisted of Kyle Heon on drums (Kyle appeared the day prior in the Rage Against the Machine tribute band, Bombtrack), Lauryn Winiarski on bass and vocals, Phil Simon on guitar and vocals, Brian DiMartino on guitar, and Steve Benson on pedal steel, mandolin and vocals, plus harmonica!

The band rolled through a variety of originals and covers. While Phil Simon did much of the vocal duty work, Steve Benson and Lauryn Winiarski have been picking up some of those duties as well. Winiarski sang the original “Only a Dream” as well as the Cage the Elephant song “Ain’t no rest for the Wicked.” Benson picked up vocal duties for Warren Zevon’s “Lawyers Guns and Money.” The rice original “Slack Jawed “was described as “the inappropriately spacey metal song” which was quite fitting. The band capped their set with Grand Funk Railroad’s “We’re an American Band” to the delight of the crowd that had formed in front of the stage.

Up quickly was New Hampshire artist Eli Elkus who did nearly one hour solo acoustic. I had expected from what I knew of him to be a bit more avant garde than he was as the set unfolded. It was more traditional folk in the front half of the set but as the set wore on he got more experimental and left of center as I had originally anticipated.

The whole show is a single track here..

The last set that I caught personally was the band Delawater The band is a group that ranges between jazz, folk and jam and consisted of several musicians who I recognized as members of prior bands that weekend. I spotted Ashleigh Theroux of Dish Soap, and others that I recognized. Jack Delamater leads the band on vocals and guitar, and they weave a dreamy landscape that encourages improvisation and experimentation but also stays grounded in song structures and tonal elements.

Mid way through their set the local authorities came and showed their presence. There was a brief interruption to the music while it was all sorted out. The band returned to playing and there was a joyous Hurrah from the audience as the festivities continued.

With the day as bright and sunny and mild in temperature, the beautiful location, and the contented people who were just happy to be together, Manafestival Sunday was a great experience. It’ll be interesting to see how the promoters are able to sort out future challenges and determine whether they can become a stop in the western MA festival landscape. Here’s hoping that they do. 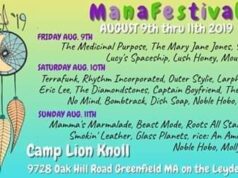 Concert Memory: The Who and the Grateful Dead

Live Music News & Review was born out of a love of live music and the wish to chronicle the amazing shows happening around the country. Stories and reviews are born both from our editorial board and from readers just like you around the country.
Contact us: lmnandr@gmail.com
5,697FansLike
209FollowersFollow
300FollowersFollow
6SubscribersSubscribe