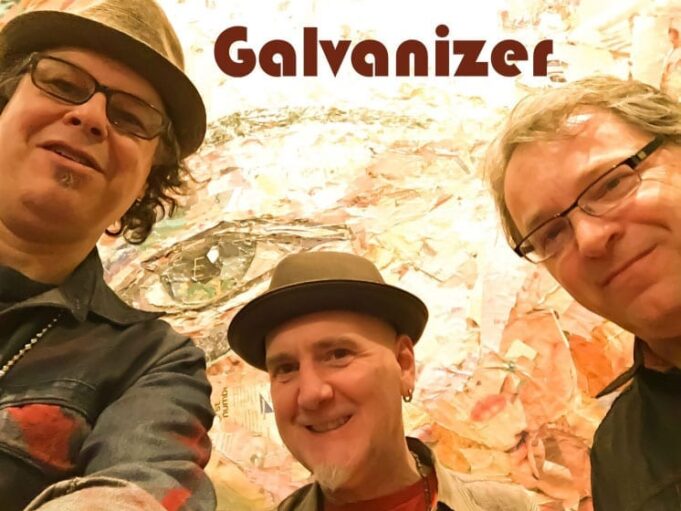 GALVANIZER ~ were, in a word, EXCELLENT!

“Good music” shifted swiftly to “great music,” and then just as quickly to “GREAT music.” Still, though… that don’t quite cut it as a descriptor. “Awesome” is only adequate and, though it certainly applies, it doesn’t go far enough above average; as the word is only ordinary these days. Adding exclamation points would be silly. We got no italics here from this format. What’s a humble scribe to do? Search his vocabulary, one supposes, and not settle till satisfied.

Galvanizer is making excellent music here at Progression Brewery on a Thursday night in the middle of the summer. I almost half-expected something hard and/or heavy, but it seemed unlikely that drummer Joe Fitzpatrick would show up in a hair band (Spandex, maybe), and guest percussor, Bill McManus, is just so mild-mannered there’s no way- unless maybe he’s holding out on us… which is not impossible; he has the chops and the versatility to branch out. In either case, the presence of either of these two guys assures the audience something tasty.

This band will appeal to a variety of listeners but still stay way up high on the scale of excellent tastiness/skill/ musicianship. Exquisite instrument work, but there’s also an energy here that smoothly glides by anything too gentle. Their energy is, in fact, perfectly portrayed with the name ‘Galvanizer’ – electrical current is added to an already-amplified, guitar-oriented, 60s-rooted sound that picks up infusions from each decade as it moves forward.

Perhaps they should be called Space Jam Jazz? We gotta say jazz because that informs all the music Galvanizer plays, whatever category they might pull from with their influences. The same goes for their originals as well. John Caban, whose band this clearly is, plays guitar in that way -or in those many ways- that make one wonder, “is there ANYthing beyond this guy’s range or abilities? The band’s website calls this stuff “psychedublic funk,” after first describing their sound as “jazz-funk … with a healthy dose of 21st Century cosmic grease.

Galvanizer covers the low end plenty well, with bass-man Donny Hayward holding it down and keeping it up. His solid style carries a proggy flavor, kinda like Connecticut’s Bob Laramie (yes, this is a compliment- and a high one). Jopey and Bill slip right in and the whole thing glides along smooth and shiny, with clean and clear sound at just the right volume level for the room.

Caban’s licks are all over the place- in the good way- consistent, rock-solid quality with jazz-infused virtuosity, but on the mainstream side of fusion. Half the material is tip-o-the tongue familiar, with the other half reaching farther into the cosmos and also covering Caban’s cache of his own compositions. As I came in and settled down, I heard some straight-up jazz being twisted into a something new- this artists’s version rather than a cover.

A few FM-type rock songs emerge every here and there, with Fly Like An Eagle soaring into the stratosphere on that Silvertone guitar… and something about the 2020 Revolution. Other touches show up between or to start some songs, recorded snippets that tie in or embellish the aural atmosphere- one provides an intro to the aforementioned Steve Miller song, such that I thought it was break for the band and JC was switching on the house music.

I liked Galvanizer’s excellent sound- It’s like sophisticated music for hanging out. Small-town bar-flies like me and my friends, we could dig this stuff and never give a thought to its excellence. It’s also college mixer material. And it’s perfect for dinner music at the local tavern, too. And dancing- we had better’n half the bodies in the house up and shakin’ it.