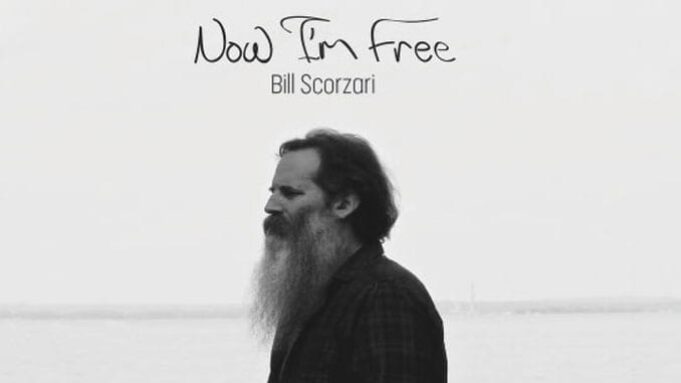 On September 20, New York native, Bill Scorzari, independently releases his third full-length album of all original music titled, Now I’m Free. His sound is gritty, raw and at times, downright sad. His songs transition through a multitude of emotions, with themes centered on the experiences of the human condition. Of his music, some say it’s spoken word, and others, an amalgam of the voice of Tom Waits, the delivery of Sam Baker, and the soul of Kris Kristofferson. In his lyrics, there is a poetic grace, a calming and resigned wisdom of acceptance that shines through the wistful melancholy of hope, and breaks free. No Depression wrote, “Bill Scorzari is a force. His songwriting is stellar, his picking above par and his voice fits his songs perfectly.”

Bill says of the record, “During the past three years and beyond, I found myself in a place that demanded prolonged introspection and profound healing to be able to navigate through and journey past. This record is a journal of some of the lessons and discoveries that I’ve encountered along the way.”

Produced by Neilson Hubbard (Orphan Brigade), Now I’m Free was recorded and mixed by engineer Dylan Alldredge at Skinny Elephant Recording in Inglewood, TN and mastered by Jim DeMain at Yes Master Studios. Hubbard says, “Bill tears himself open on these 15 songs and leaves it all out there in plain sight. He is an open book delivering a record of astonishing intimacy… and the gravel and whispers in his voice carry a true knockout punch.”

Check out “It All Matters” on Spotify.

Throughout the entire album, Bill’s authenticity as a songwriter moves you through his music breath by breath. Profound and poetic, Scorzari’s emotionally charged and introspective compositions are sung with a knowing tenderness of heart.

The album opens with “Into the Light Of the Day,” of which Scorzari says, “Faith and trust are so important. When they are called into question, for whatever reason, it becomes difficult to see things clearly. We become distressed, and our distress makes it even harder to find clarity… Nothing can resolve until we look directly at it and confront the full depth of it all. The first step toward doing that is both the most difficult and the most liberating step, taking what troubles you into the light of the day.”

This is fitting to describe Bill’s music in general and his approach of digging deeper into his own depth and bringing his thoughts and experiences honestly and authentically into the light through the medium of music.

He writes in the title track, “Now I’m Free,” “So, I stood there by the waterfall flowing from the bridal veil, with an angel dressed in rags. She said, ‘To hell you ride.’ And, to hell we sailed. And, we never did look back. And, she said, ‘Every word I say is true and someday you will see, spending all of our time always tryin’ to break through, leaves us no time for tryin’ to break free, and it’s time to break free.’”

Another standout track on the album is the first single, “It All Matters,” with Erin Rae adding vocal harmony. When asked about what the lyrics of this track mean to him, Scorzari says, “It’s so important to be attentive to each other. The way toward that goal, is to start to be more attentive to ourselves, to heal what needs to be healed in us and to find a path forward to our own better existence… It’s never too late to shine a light through the darkness… The big things are important, but so are the little things. It all matters.”

The nearly 11-minutes of “Yes I Will” were recorded in an unrehearsed, epic “first take” in which Bill sings, “And, I know these thoughts will come and that they will go again, and yes, I know, yes, I can still chase the harder days away with just some paper and a pen, the way the sun will rise and embrace the white moon in its own black skies, and then there’ll be no need to try to make me smile. Won’t you help me to more easily reveal my broken soul?…  I’m only distracted by my motion when I’m intent on standing still. And, if you let me have the time to just keep on tryin’ to break through, just to be human, well then, yes, I will.”

There is a wide variety of soundscapes in Now I’m Free, ranging from the slow country waltz of “Over Again,” the catchy uptempo road song “Treat Me Kind,” the sleepy-slow, intoxicating, drunken-swaying groove in “San Miguel County,” the crushingly intimate and breathtaking “One More Time,” and the raging blues number, “Steel Wheels.”

“When Will My Time Come Along” is a humble reminder of the seemingly endless struggles we must endure, and the importance of small accomplishments made along the way towards larger pursuits. It’s chord progression manifested easily in Scorzari’s mind, as did the lyrics for “It’s Just What I Know,” when he found himself in that “longed-for space where the words you’ve desperately searched for, and have been struggling with how to say, suddenly arrive as a gift in an unfettered moment of clarity.”

Although he picked up his first guitar at just 8 years old, it wasn’t until 2011 that he was able to give his artistry the attention it deserves. The passing of Bill’s father and role-model, whose footsteps he had followed into the practice of law, marked a time of profound change and opened a new chapter – one that required a giant leap towards pursuing a passion that had long been tucked away in Bill’s heart. The three albums (and their titles) that he created thereafter, represent the narrative and catharsis of his journey: past, present and future.

The first two, Just the Same (2014) and Through These Waves (2017), were both released to critical acclaim. Waves, a spring release, made several best-album-of-2017 lists, including Folk Alley and Elmore Magazine. Jim Hynes, in his review of Waves in Elmore, says of Bill, “…his thoughtful, cinematically shaped songs that continue to resonate after repeated listens. Yes, this is a ‘must hear’ for singer-songwriter aficionados.” One such aficionado, WFUV’s John Platt, says, “Bill Scorzari has a lived-in voice that says, ‘Listen to these songs. They spring from the earth and the ocean with an open heart and the wisdom of experience.’”