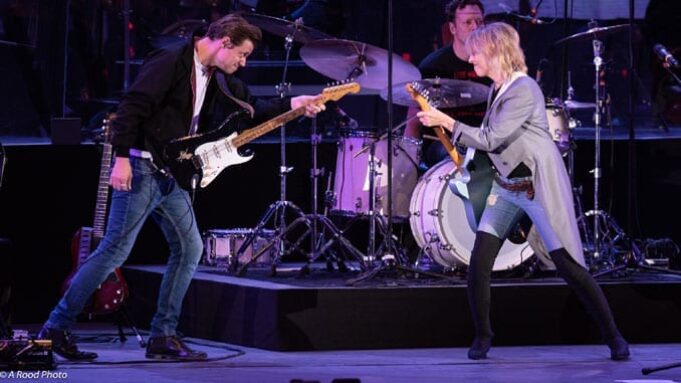 Review by Michelle Nati with photos by Stevo Rood

Chrissie Hynde is a living legend who has been doing things her way since The Pretenders auspicious debut album in 1980. She has cranked out work unapologetically and with conviction throughout her career and is still beloved as a frontwoman, vocalist, and tireless voice for animal rights.

A full gallery of photos from this night by Stevo Rood is located here.

Hynde is gearing up to release Valve Bone Woe—a solo LP of jazz and standard covers and songs played in those styles—which comes out September 6th. She played in support of it at the Hollywood Bowl with help from its legendary orchestra, led by conductor Thomas Wilkins.

Hynde took command of the stage both physically and vocally from the moment she walked out on it. She performed downtempo versions of The Beach Boys’ “Caroline, No,” the João Gilberto tune “Once I Loved,” and Sinatra’s “I Get Along Without You Very Well (Except Sometimes)” before launching into The Pretenders’ first hit “Brass In Pocket,” which got the biggest round of applause before intermission.

When she returned, Hynde continued featured songs from her upcoming album—Nancy Wilson’s “How Glad I Am,” Johnny Mathis’ “Wild is the Wind, and an ambitious Barbara Streisand B-side, “Absent Minded Me,” all which were suited well to her powerful voice and signature vibrato. She then, once again, launched into some Pretenders classics which had the crowd on its collective feet the rest of the night —”Talk of the Town,” “My City Was Gone,” “Message of Love” and “Back on the Chain Gang” among them.

Hollywood Bowl Orchestra: The Star Spangled Banner
Three Black Kings, Balthazar Movement (Duke Ellington & His Orchestra)
Three Black Kings, Martin Luther King Movement (Duke Ellington & His Orchestra) Naima (John Coltrane)
Chrissie Hynde: I’m a Fool to Want You (Frank Sinatra)
Caroline, No (The Beach Boys)
Once I Loved (João Gilberto)
I Get Along Without You Very Well (Frank Sinatra)
Brass in Pocket
How Glad I Am (Nancy Wilson)
Wild Is the Wind (Johnny Mathis)
Absent Minded Me (Barbra Streisand)
Hymn to Her
You Don’t Know What Love Is (Chet Baker)
Talk of the Town
My City Was Gone
Message of Love
Kid
Back on the Chain Gang
Don’t Get Me Wrong
I’ll Stand by You

A full gallery of photos from this night by Stevo Rood is located here.