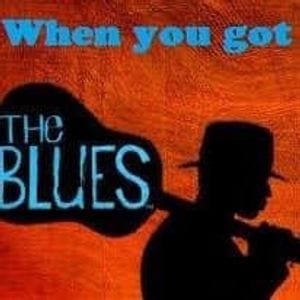 I came in the ‘other’ door at Luthier’s  Co-op, or the Ray-Ray’s (restaurant) side, and I felt like I had stumbled (literally; with my crutches and all) into a little home-coming get-together right there in the front of the place, between the bar and the big front window. Six or eight of the Valley’s finest were all gathered around one of those high-top tables… in another minute or two it was more like eight or ten, and then ten/twelve another minute along.  This had the vibe of a happening scene.

Who’s to say which of the featured players in the actual band might be the main draw for all these others showing up, and who knows how all these area musicians happened to have a Friday night off?  And come to think of it, I’m not at all sure I noticed a name for the impromptu ensemble that was scheduled to play.  All’s I know is, they promised “an hour-and-a-half of unrehearsed blues” -which isn’t always such a good thing neccessarily; loose and casual don’t always make for a safe bet- but one look at the roster and I took the prediction to be a promise rather than a threat.

First off, we got Mighty Matt, the Mississippi Mudslinger, who has been high on the list of priorities for quite some time.  We used to see him fairly often when he would show up and sit in at some of Dynamite Johnny’s gigs- always welcome and totally trusted for adding a lot to the show.  Matt has the look of a blues man, too, and a mighty one.  He sings just like the blues should be sung, with the right voice and presence, and as soon as he whips out his lickin’ stick, we know we got us some blues goin’ on here.  For a guy who took a little time away from ‘the scene’ (if I got the scoop straight a year or two back) and was just getting back in the swing at that time, he didn’t have much dusting off to do; he rolled in firing on all six and ready to rock.

Johnny’s Number One drummer, Billy Klock (EVERYone’s #1) was just getting out of his car when I came along just shy of start time- no need to load in early here; there’s a house kit already in place and set up- or close to set up anyway; I don’t think it’s humanly possible for another to set up a drummer’s kit and get it all to be ‘just so.’

I’d thought that Henry Spadoni was expected to show up and hang out, ready to play a couple if and when, but… even better, he’s staying up on stage the whole time.  And, as if if that ain’t awesome enough, Dave Boatwright (regional reggae guitar king of the Equalites and Loose Caboose) is right alongside, axe in hand.

We know these guys.  We have seen ’em around plenty, hovering at the highest plateau of local greats, but we might not have seen them all together, in the same place at the same time, trading licks and swapping songs like a well-oiled unit, even if it is all off the cuff…

Now, the bass player… “Junior” something; he spent a couple of decades in the company of one Vast Ed Vadas I hear- that really says something right there, speaking volumes to his skill and ability… and you ought to see the axe he’s grinding! I think it’s against the law in most states to be seen on-stage with an implement so beautiful and impressive as this guy’s five-string, and not have the chops to deliver the goods.

Being as he’s positioned front-and-center, one might surmise that this entire endeavor is initiated and undertaken mostly at his behest.  Which works just fine… better in fact; it’s quite good: solid, smooth, super-energized and all stirring the pot like pals from way back, this band could take it on the road or just circulate as wide a radius as they cared, or as often as they would. There’s the rub: they’re all really busy.

So Junior, this big bass-man, he’s the one leading the charge.  Not that he takes up a lot of time talking, but whatever banter there is comes from his center-stage station. He is genial, silly, intelligent and sarcastic (sounds like Ed, right?) which all adds up to amusing and translates into entertainment energy, and the others with him pick up on what he’s laying down.

The acclimation does take a few minutes though; at first they seem just a little, ummm… apprehensive maybe… like they’re watching for the cues to come and the tone to be set. You know, like pro’s do, especially when they don’t have a lot of miles logged playing together- or any- but at the same time, they have no worries… just watching and waiting willingly to see how this thing is gonna go. Or maybe they’re worried we’re gonna watch while the whole thing washes away with the with the waste-water. I doubt that.

What happens is fun to watch. Junior bass-ically anchors the affair, and he does this by passing the baton around to each of the others to pick a track for all to perform. After each takes a turn, except for the drummer of course, Junior names the next tune. So after the first round, we have had a sampling of what each has to offer- except the drummer of course. Billy doesn’t sing and he lives to serve, which he does so well.

Mighty Matt takes the first turn, and he delivers so good that at least one audient would just as soon let the boy run with it. One of these days, we’ll see the guy front his own thing; that’s really what at least one  audient (the same one, yes) has been looking forward to for a while. Timing is tough at times. This leads to no  loss, however, as the lads all lead in turn.

This cycle goes around a couple-few times, spinning well within control, and after a couple of hours the hosts are saying, “go on and play another- several times in succession, even . This is rare-beyond-ever for this house; they run such a tight schedule that that last act for the night will usually get one… or none. So this was worthy of note. And just as well, as Junior and company- and everybody eise, too- we were all into the moment more than minding the time on the clock.

I came in tonight not knowing what to expect other than something good; that much was a safe bet. I might have had a hope, I suppose, that this show would be all about my man Matt Ingelis, but only because the invitation was routed to me by way of his connection. No need for concern on that count, however; with Boatwright, Spadoni and Klock on the bill, it’s a pretty sure thing I’d have hobbled my butt down here anyway- the last bus ran right on time for the short trip, and another safe bet was that I would find a ride home after.  I’m glad I made it.

When You Got the Blues turns out to be the name for this aggregate escapade. Funny name, right? It’s a no-need-to-take-yourself-so-seriously moniker. This confirms my conclusion that the cardinal connector here is Junior With the Big Beautiful Bass. The Spirit of Ed Vadas carries on.

BTW: The Dave Boatwright mentioned in this write-up is none other than the very same feller who has a number of articles right here in LMN&R. Was I aware of this the night I saw this show and chatted with him afterwards? Nope… of course not!