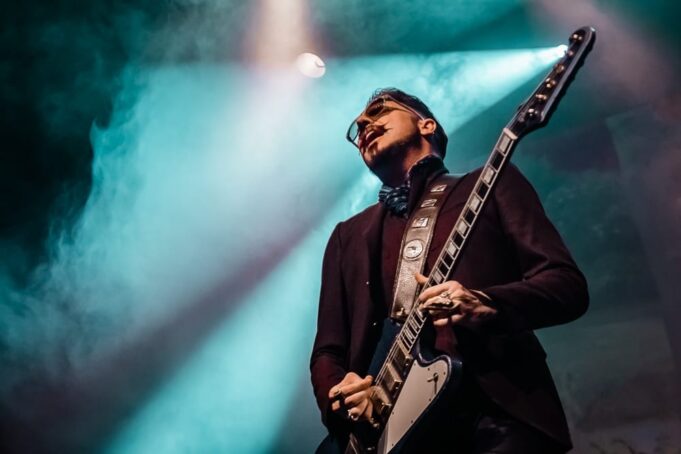 Rival Sons is an American rock band that was formed back in 2009. The group is made up of four members Jay Buchanan on lead vocals, Scott Holiday on guitar and backup vocals, Mike Miley on drums, and Dave Beste plays bass and performs backup vocals as well.

To kick off the night they sang “Back in the Woods” a song off of their Feral Roots album which was released back in January of this year. Their music can be categorized as classic rock with Jay practically screaming into the microphone while singing.

About halfway through their set things slowed down a bit when they performed “Jordan.” Buchanan shared that he wrote the song inside of a closet in Tennessee because he didn’t want anyone to hear him sing a song about grief when he is supposed to be a rock and roll musician. He said it was the first song the band ever played together, and as a result, he felt something special was going to happen with the group. He also talked about how fans would come up and tell them how much the song helped them through difficult situations and dedicated the song to anyone in the crowd who needed it. After that things picked back up with some insane guitar solos from Scott that had fans going crazy.

On stage, they had a great light show that added to their performance along with dramatic fog and a nature scene backdrop which is the cover for their Feral Roots album.

If you are a fan of hard rock music, I would definitely recommend checking out Rival Sons because they give off a classic rock vibe and you just can’t help but rock out to their great sound.

Back in the Woods

Sugar on the Bone