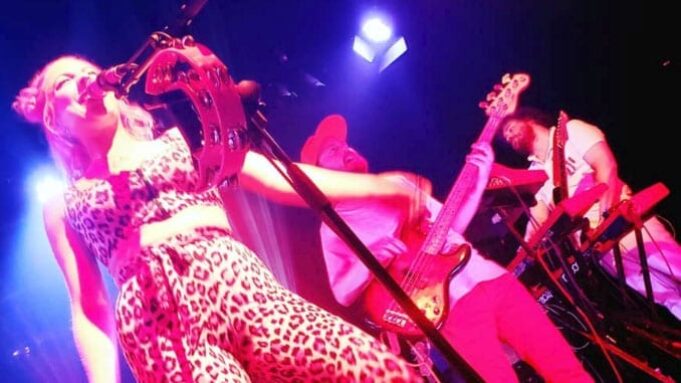 The music community of which I take part in is a sacred thing for me. People come and go in my life sometimes with such rapid progression that I can’t take the time to fully appreciate their individual souls. Turkuaz at the Paradise in Boston on 4/20 was one of those nights where I treasured every single human interaction that I was a part of. The music aspect of the night perfectly matched the intensity of the people in attendance. A big ol’ boisterous bunch just bebopping and shloping all over the dance floor. Sweat and beer were sloshed around like some sort of weird water sport, while the crowd screamed lyric for lyric with the band.

Drunken Doja Monkey opened the show and shuffled us around a bit, but when Turkuaz took the stage in front of so many familiar faces, you could tell they felt right at home, and with some of them being graduates of Berklee College of Music, they were.

Jumping straight into “20 Dollar Bill,” the flame was lit, and it was a pretty big one from the get go. It wasn’t your average size match head flame, either. No, I’m talking campfire to start it off. Then the ever-so catchy “If I Ever Fall Asleep” was followed by “XYZ.”

Then things really started to heat up. Boston’s own Lyle Brewer joined the gang for a take on Van Morrison’s “Caravan,” which, for me, was completely unexpected. They ended the first set with three off their newest studio effort, Life In The City, and the familiar little banger “Bubba Slide.” “Rule the World,” “The Question,” and the b-side track that didn’t make the album, “Take It Slow,” was a perfect trifecta to show case Sammi, Shira, and Josh’s uniquely talented and different voices.

Check out Cue. the Medicine’s blog!

The second set is where the inferno started. Busting out The Who’s “Eminence Front” with such funky precision, then going straight into “Life In The City,” was as smooth as an ocean stone. My partner-in-crime Chelsea, who is even a bigger Turkuaz fan than me somehow, got the “Zynth” she wanting to hear. And I got the “King Computer!” But in another turn of events, the 9-piece crew turned out “Get Back,” a ripping cover of the classic Beetle hit. The roof had officially caved in at that point, yet they plugged right along. It all culminated with a Coast to Coast encore that had you speeding westward along that musical highway toward the sinking sun. With the top down, sunglasses on, and a smile that could be seen from space, the show had ended.

That gets me back to the beginning of this little review. I tend to always meet new people at shows. Some stick around in my life for a while, some are gone with the fading day. But being able to experience it with someone close to me, who has as much passion as me, and who holds this band so close to her heart like me, is a special treat. Our rafter of turkeys is large and is only growing bigger by the show. Soon we will all be looking for a bigger tree to roost in. Who knows, maybe that tree will be as big as let’s say, I don’t know, the Boston Garden or MSG.

If I Ever Fall Asleep

Eminence Front (The Who cover)

Life In The City

Get Back (The Beatles cover)