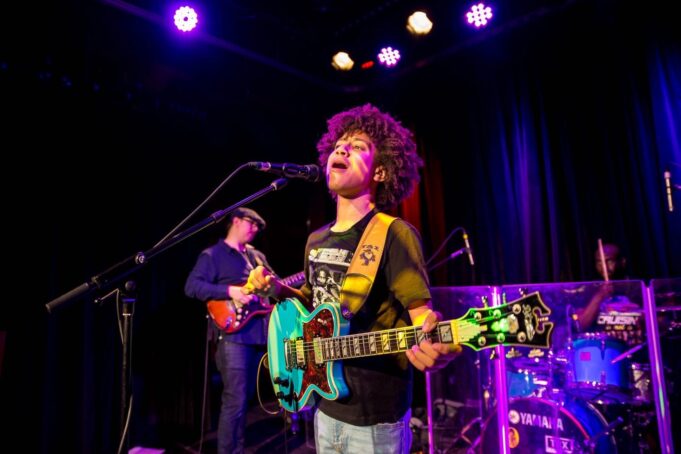 Brandon Niederauer is a sixteen year old guitar phenomena who started playing guitar at the ae of seven and starred in the 2015 Broadway production School of Rock. In addition to an acting career Niederauer who goes by the nickname “TAZ” has performed with some of the biggest names in rock music including Gregg Allman, Derek Trucks, Warren Haynes, Buddy Guy, Stevie Nicks, Lady Gaga, Slash, George Clinton & Parliament Funkadelic, Dr. John, and countless others.

Lots of great photos by JD Cohen from this show here.

The last time I saw TAZ he was 14 playing a major music festival in Pennsylvania. At the time there was already a substantial buzz about his talent and a growing curiosity about how far and in what direction his extraordinary gifts would take him. Seeing him for the first time I went into the experience assuming the young musician would have plenty of technical skill but what I didn’t expect was how well developed and mature he was musically as an artist. For sure TAZ has plenty of flash and technique but what is so astonishing even more so now, is TAZ’s maturity as a musician. His phrasing and style are what immediately grabs you. The fluidity, soul and the range of expression of his playing is of someone much older. Over the course of the almost 90 minute set at Berklee College of Music’s Red Room at Cafe 939 TAZ was soaring, soulful and funky with hints of classic Allman Brothers, Jimi Hendrix and Slay Stone.  Among the 12 song set that included covers of Lou Reed’s Rock n’ Roll, The Beatles Blackbird and Jimi Hendrix Fire TAZ performed with the controlled passion, feeling and the showmanship of a grizzled veteran.

The lyrical content of The Grateful Dead’s West LA Fadeway was only song that didn’t quite suite the young talent but the guitar solo was an absolute highlight of the show. Originals like Find a Way, I Can’t Live, Where I Belong and the impressive Paralyzed are more than just vehicles for TAZ’s incredible playing and are delivered feeling and emotion. But its TAZ’s guitar playing that carries a maturity that impresses beyond any thoughts of age or experience. TAZ has full command of the stage and his chemistry with fellow guitarist Matt Godfrey, bassist Matt Fox and drummer Kendell Lentz is a pleasure to watch. Everyone on stage seemed to be having great fun while genuinely admiring the band leaders playing as much as the sold out crowd.

Lots of great photos by JD Cohen from this show here.