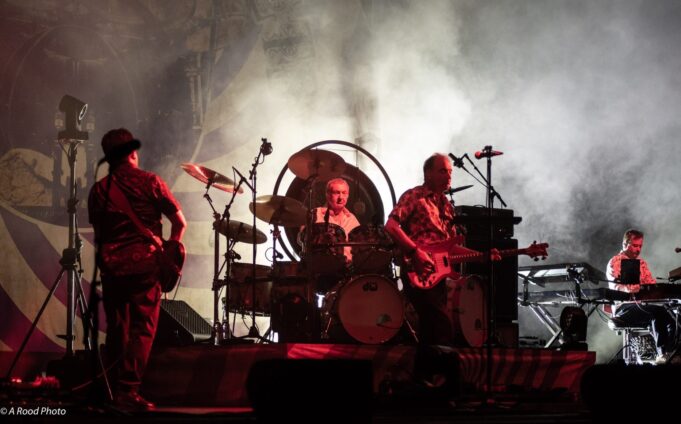 Photos by Stevo Rood and Words by Michelle Nati

If you never thought you’d have the pleasure of seeing the songs of Pink Floyd pre-Dark Side Of The Moon, band drummer Nick Mason will assuage your fears. He delivered those particular goods with Nick Mason’s Saucerful of Secrets at the Los Angeles Wiltern on March 12-13 and continues to make his way across the US.

Mason himself did not attempt the vocal duties that were previously handled by bandmates Syd Barrett, Roger Waters, and David Gilmour. Instead, he stayed faithfully behind the drums while ex-Spandau Ballet guitarist Gary Kemp attended to most of the songs. That doesn’t mean, however, that Manson wasn’t front and center throughout the show.  He told stories of his early days in Pink Floyd between tunes, offering a glimpse of a young psychedelic band before it was overshadowed by massive success with the release of Dark Side in 1973.

Saucerful opened with the several-minutes-long instrumental “Interstellar Overdrive” and from there launched into a series of jams including  “Astronomy Domine,” “Atom Heart Mother,””See Emily Play” and the unfinished “Vegetable Man” which was so because, as Mason put, the band  “ran out of Syd.” Before launching into “Set the Controls for the Heart of the Sun,” he regaled the audience by gently ribbing his time with one former bandmate: “I spent the last 52 years in one particular band working with a particular group of people, one of whom is a great friend, a very talented man, but a bit picky when it comes to sharing. Mr. Roger Waters was not good at sharing the gong. In the last 52 years, I never ever got to play it. So tonight, it’s a very special night.”

Mason’s assembled crew ended the vigorous and tight set with “One Of These Days” from Meddle before a short encore feature namesake tune “A Saucerful of Secrets,” and the 1968 single “Point Me To The Sky.” If you haven’t yet seen Saucerful, get thee to a concert hall. This is no tribute act—instead, it’s is as close an early Pink Floyd show as you will ever get, lovingly and faithfully performed by the man who was there for it all.

Green Is the Colour

Let There Be More Light

Set the Controls for the Heart of the Sun

One of These Days

Encore: A Saucerful of Secrets

Point Me at the Sky