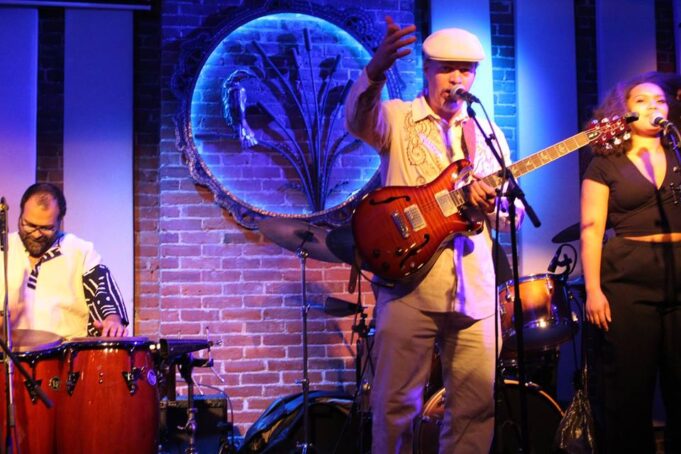 Performed live on February 01 2019 at Hawks and Reed PAC in Greenfield, MA.

A cold night was not enough to stop a crowd of people from gathering at Hawks and Reed in Greenfield, MA to see two bands that are breaking into the New England music scene.

Onstage first was Wurliday, a six piece band hailing from both the Pioneer Valley in MA and Albany, NY with a mix of players. I recognized Justin Henricks from his time in Beau Sasser’s Escape Plan on guitar, vocals, and band leading, and of course, Ilana Morris from the Alchemystics up front on vocals. The band opened sans vocals, though, for a song or two in old school fashion, laying down the rhythmic and instrumental foundation before Ilana joined the band on stage.

Wurliday is a funk band mining blues and r&b gold. Their influences clearly roam from old school funk like the Meters, to new school funk like Vulfpeck, exhibiting the understated musicianship of that band. The vocals are up front diva inspired singing from belting to introspective tenderness. Morris has been with the band for long enough to be comfortable with the material, but you know that it will continue to get better as the material becomes a part of her musical DNA.

It would be a failure to not mention the other great musicians onstage, from additional guitar to drums, bass and keys. Each player was beyond sufficient, and each had their moment to shine and impress. I was struck by the drummer, Andrew Cusanelli, who was excellent, and his hand posture was so close to the drum set that inspired efficiency and a measured volume and dynamics that set the foundation for the band perfectly. Full set audio below.

After a short break, Taproots took the stage. I had seen what I believe to have been their inaugural performance, and since then they have launched a video, climbed up the world music charts, and have moved on from what may have been a single night single release band to an artist collective that seems to be vying to become a fixture on the regional music scene.

The band is composed of most of the Pioneer Valley music scene including members of the Alchemystics, the Mary Jane Jones, the Problem Addicts, the Chad Hollister Band, Dave Noonan’s Green Island, and many other bands. The stage was full from side to side with horns, keys, guitars, drums, percussion, and vocalists.

There are many bands around that have a world music influence. But this is a true world music band. Lead singer and guitarist, Matt King, has assembled an incredible crew, and he sings and writes in English and Spanish, and perhaps other languages, too. The music easily evokes the rain forest or tropical islands, and like other world music before this, there is frequently a political bend to the lyrics and their stance on stage, but the focus is the music for sure.

Band members included Yahuba Jose Garcia Torres, Zami BK, Ilana Morris from the Alchemystics, and Wurliday completing her second set of the night, a horn section of Jon Weeks, Jeff Fennell, Kat Rapaki, rappers Force and Catalyst, Chris Ball on bass, Dan Thomas on guitar, Dave Noonan on drums, and I am certain that I have missed some folks, too.

The set began with “Opening,” with lyrics sung in English and Yoruba about the Afro Cuban Deity Elegba, into a Brazilian song by Milton Nascimento called Cravo e Canela (with a fiery percussion breakdown by Yahuba). Then “Walk Lightly on the Land,” where the band was joined by Force from the Alchemystics, who’s masterful flow spun words around the state of the environment. Then “Hands Up,” which featured Catalyst from the Problem Addicts and recitations by Ilana and Zami of the last words spoken by a number of victims of police violence.

Then Stevie Wonder’s “You Haven’t Done Nothing,” followed by a couple of medleys, the first being two cover tunes, one of the Afro Cuban jazz group Irakere, combined with a politically and spiritually charged funk number by Prince called “Get on the Boat.”

The second medley was introduced Matt King talking about the power of the Earth, and his wonderment at who will sing our songs once we are long gone. King had the audience sing the refrain “the hills will sing our songs” which sounded beautiful to him from the stage hearing the audience. This was then followed up with “the Truth in the Lie,” which had intricate musical twists and turns including a Yoruba creation story and ending in a frenzied crescendo. The last song, “Everything is Everything,” and is about how we are all connected, an appropriate ending to a great night of connection between art and community.

The band took a political stand within their set flashing up signs of victims of police violence and a shout out to Black Lives Matter. Overall, though the concentration is on the music, a very danceable melange of world flavors delivered with vigor and energy.

Below is a recording of the first half of Taproots’ set.