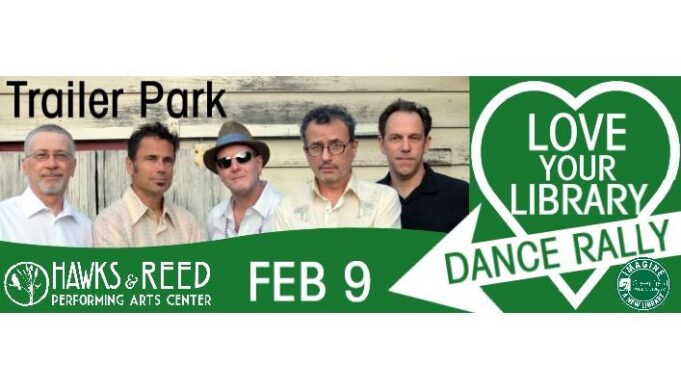 My buddy wanted to go out, and there was a show at Hawks and Reed that was to benefit the library, so what the heck, let’s do it. The band that night was Trailer Park, and I had heard alot about them locally, and I may have even seen them on the green at Taste of Amherst for a minute ten years ago, but I didn’t know necessarily what to expect.

We got to the club and the kind mistress of the door asked “Are you here for the dancing?” That, is a good sign. We paid our incredibly low admission fee and were into a busy and active night in downtown Greenfield. There was a nice crowd of mature audience members, getting down big time.

Trailer Park is a five piece band with Joe “Jopey” Fitzpatrick on drums, Rick Page on bass and vocals, James Robinson on guitar and vocals, with Tom Mahnken and Greg Lauzon each on saxophone and backing vocals. The first three mentioned make a formidable rhythm section, and having two sax players enables a shuffling of instruments from tenor to alto and great harmony between the two horn players.

The band themselves ran a timeline from old timey rock and roll from the rockabilly of Carl Perkins to Chuck Berry, the progressive quirkiness of WAR, all the way up to modern blues influences alternative rock similar to Cake of Morphine. In between there is a little bit of everything from quirky 80s pop rock that reminded me of Squeeze to more western swing or country elements that spoke to me of Big Sandy of Wayne the Train Hancock.

The audience reacted to each new original as if it were a cover song, singing along oftentimes after instruction as to how this or that song went, and dancing up a storm. The band has a sense of humor- not taking themselves seriously with their banter after taking themselves very seriously in the arrangement of the music and their personal skills on each instrument.

Jopey is a skilled drummer well versed in all of the styles mentioned above. He is what you want out of a drummer in your band, able to move things along rhythmically, separating parts of a song with definitive and digestible drum fills while establishing driving rhythms that are different and definitive for each song. Both Rick and James on the vocals were quiet clear, able to deliver exactly the message or vibe of each song.

Robinson on guitar was playing a basic Epiphone through an Orange brand amplifier. Most of his power was via the PA system, and he was able to keep his stage volume low enough that the whole band was producing at a volume that was super appropriate for the room. The thing that struck me most about his guitar playing was the amazing appropriateness of all aspects of it. His rhythm playing was both direct and sparse, chopping out chords that were perfectly timed. Robinson’s soloing was a lesson in both patience and phrasing. He did not feel obligated to establish a lengthy ray of time into the future that was a constant array of notes. Rather he would let the rhythm section breathe for long sections of his solos, and then just tastefully lay down a lick here and there.

It was a very effective style that demanded your attention and supplied some fire, but was very understated. The whole band was this way, making room for each other. It’s almost as if they put the whole of their skills into the center of the band, and slowly, one by one- each player was required to remove everything extraneous, and what is left is all essential sound and rhythm, the nucleus of a great band delivering quality songs. I thought to myself “Spartan Elegance” as a description. Everything in its place, and surprisingly advanced and progressive when the band wanted, but always deferring to function. The end result is a full night of music in which around every corner there is a surprise, but nothing shocking, always leaving with you a very comfortable and happy feeling.

This may have been the first time I saw Trailer Park, but I doubt that it will be the last. For those who are interested, the event was put on by the Greenfield Public Library Foundation.

Full show audio, just use the arrows to toggle between songs.

Drop us a line at lmnandr@gmail.com with your live show review or live music news story.