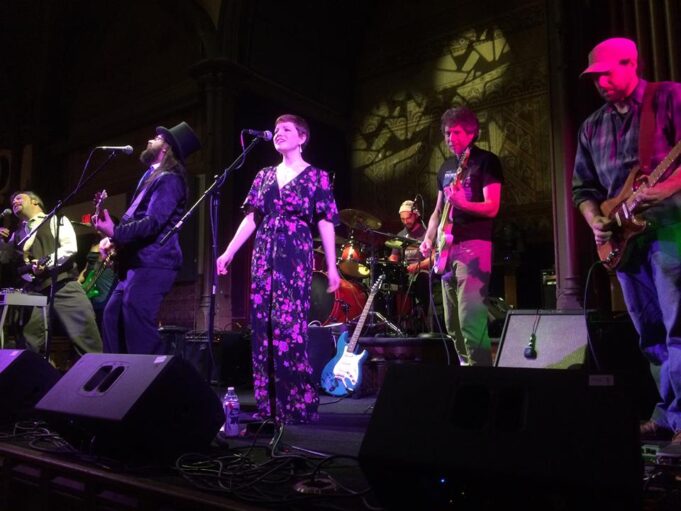 The Stone Church in Brattleboro Vermont is the latest venue cropping up in western New England that is bringing in national talent as well as nurturing local and regional acts. The venue is exactly as it claims to be: a converted church in downtown Brattleboro that has been retrofitted to be a very fine music hall.

The food was better than expected featuring turkey chili, gourmet grilled cheese, hand cut fries and more. While I didn’t get to partake from the bar too much they had a variety of microbrews and liquor, too. There are a few tables and chairs around the edges of the main room, but it is mostly dedicated to a significant dance floor. There is also a fun balcony that can seat I’m guessing around 30 folks overlooking that provides a nice change of scenery and a bird’s eye view of the proceedings.

Nate Martel opened the show with a forty five minute solo set. Well known as the band leader for Outer Stylie as well as being in a variety of other regional bands like Beast Mode, this was an opportunity to catch Martel in a more intimate performance circumstance. He performed many songs from his debut solo album, Short Stay, along with a few different covers including Fire and Rain by James Taylor. His performance made it easy to focus on his evocative vocals and his guitar skills are nothing to ignore, either.

rice – an American Band followed with nearly two hours of music, most of which were originals. The band that night was seven pieces with Kyle Heon on drums, Lauryn Winiarski on bass, Joshua Leach on guitar, Brian DiMartino on guitar, Phil Simon on guitar and vocals, Emily Jones on vocals, and Steve Benson on vocals, mandolin and pedal steel.

The room is just a joy, with great old fixtures and an intricate, vaulted, wooden ceiling. The stage is nice and wide and the band was clearly comfortable spread out from side to side. There was a nice light show that was complimentary to the material but didn’t distract with two much flashing or movement.

The set list focused mostly on originals but included the show opener, Grand Funk Railroad’s We’re an American Band, plus covers by the Cranberries, as sung by Emily Jones: Dreams. Mid show Steve Benson moved to center stage for his Irish rocker, Seven Drunken Nights. And to close out the show a rollicking Comfortably Numb that featured a scorching solo by DiMartino. The set closed with an original by Simon: Flow of Things.

This was the first gig in months for the band who took to their basement studio to hibernate and woodshed the material. The room features a great sound system and the band had fun interacting with the crowd who came out to support them on a chilly night in early February.