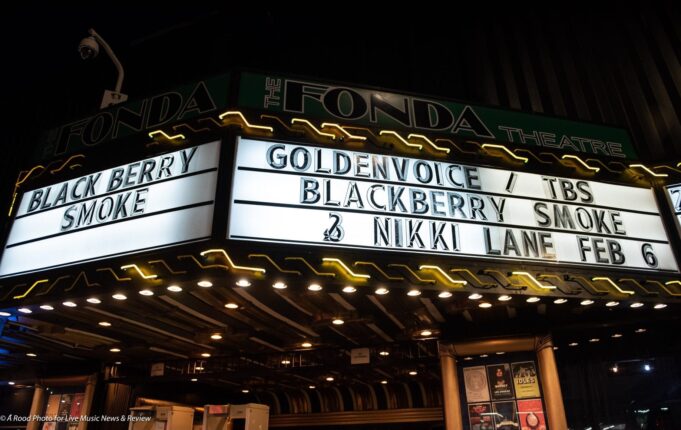 Photos by A Rood Photography, Words by Harriet Kaplan

Logging in 250 shows a year touring, Blackberry Smoke from Atlanta, GA, are seasoned and veteran musicians. Formed in the 2000s, the versatile five-piece band carry on the tradition of playing Southern rock music adding their own musical spin to combine elements of classic rock and blues. Then, they mix in traditional and alternative country. From there, add strong and vivid lyrics about everyday people trying to make it their lives in not so quiet desperation and rise above their bleak circumstances despite the odds and you have a winning formula that an audience can identify with across the board. That long-standing fan base came out to see the group at The Fonda Theater in Hollywood on February 6th.

The audience was captivated and mesmerized by their gifts as musicians showcasing their skill and finesse displaying a mastery of their respective instruments. Their performance onstage was emotionally charged as it was boldly confident. Lead vocalist and guitarist Charlie Starr is a engaging, likable frontman and good melodic singer. Starr was a focal point for the crowd as he dazzled them with an arsenal of various guitars he played over the evening. You could hear the audience chant: “Charlie, Charlie!” through the two-hour show.

Check out the full gallery of amazing photos here.

Spanning material from the band’s earliest repertoire, to their sixth and most current release “Find A Light,” there were a number of standout songs including “Fire In The Hole,” Thunder,” “Let It Burn,” Whippoorwill,” “Payback’s a Bitch,” “Flesh and Bone.” The two-hour rollicking show concluded on ever a higher note with an exciting encore featuring special guest musicians Keith Nelson, Duane Betts and Butch Walker. Nikki Lane appeared stage again to perform with the artists. Lane, a gifted singer/songwriter in her own right, opened for Blackberry Smoke, with her excellent band playing outlaw country material with a vintage and modern sensibility including some songs off her latest album “Highway Queen.”

Check out the full gallery of amazing photos here.