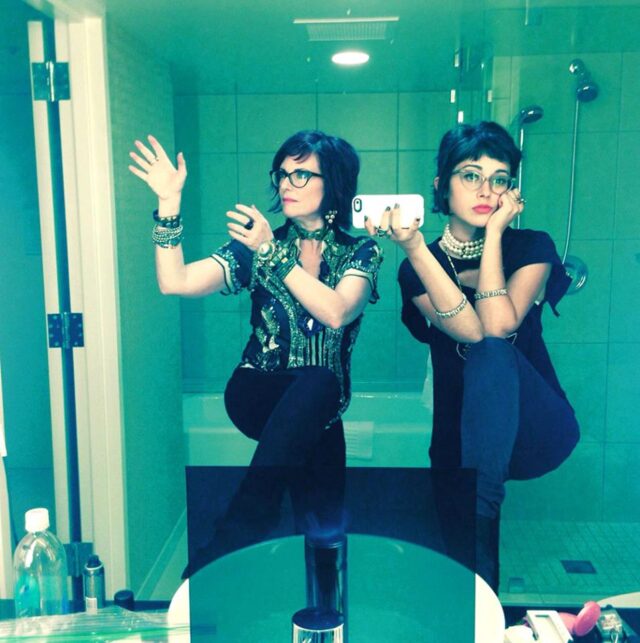 Nancy And Beth, the punk/vaudeville heart-child of two friends, Megan Mullally and Stephanie Hunt, pick dope songs and then sing them while dancing and wearing matching costumes. They’ve been described by Noel Gallagher as “definitely not bigger than The Beatles.”

With a combination of psychic twinship, childlike enthusiasm, rigorous preparation of songs, and zero preparation of what happens in between, Megan, Stephanie and the five dollfaces who back them up have created a musical outfit that is celebratory, surprising, sweet, tuneful, eye-catching, thought-provoking, and amusing.

Nancy And Beth’s self-titled debut is available here on limited white vinyl and on all streaming services. Their second LP will be out in 2020, and new music can be heard in the audiobook version of Mullally and Nick Offerman’s New York Times Best Seller, The Greatest Love Story Ever Told.

The band has confirmed a 2019 tour of the US and Australia, including April 19 & 20 at Largo in Los Angeles, the Carlyle in NYC May 14-18, 21-25, and a return to the Boulton Center in Long Island on May 9, the scene of the band’s first crowd fight, an exciting turning point.
Tickets are on sale now.

Hailed as “the most avant-garde show to play the Cafe Carlyle in recent memory,” (Theater Mania) and “musical misfits” (NPR All Things Considered), Nancy And Beth have also wormed their way into the Newport Folk Festival, the Grand Ole Opry, London’s Royal Festival Hall, Solid Sound, and many, many other sweet venues in the US and abroad, leaving audiences with feelings of happiness and contentment not felt after seeing bands like Chick Corea or the Mormon Tabernacle Choir.

In summation, bring yourself and your friends to see Nancy And Beth (yes, New York Times, the A is capitalized, please try to keep your shit together) and let us entertain you. Bigly. Like two funny fairies who can sing and dance.

Dave Keller Releases First Ever Live Album and is Heading out on Tour!